Google Glass smart eyewear returns. Image copyright Google Google is to sell a revamped version of its smart glasses to businesses, more than two years after the original version of the product was cancelled. 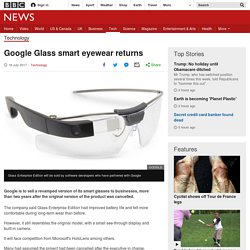 The company said Glass Enterprise Edition had improved battery life and felt more comfortable during long-term wear than before. However, it still resembles the original model, with a small see-through display and built-in camera. It will face competition from Microsoft's HoloLens among others. Many had assumed the project had been cancelled after the executive in charge, Tony Fadell, resigned last year. 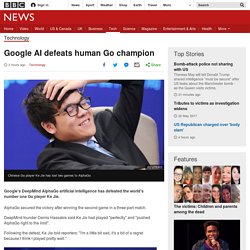 AlphaGo secured the victory after winning the second game in a three-part match. DeepMind founder Demis Hassabis said Ke Jie had played "perfectly" and "pushed AlphaGo right to the limit". Following the defeat, Ke Jie told reporters: "I'm a little bit sad, it's a bit of a regret because I think I played pretty well. " In Go, players take turns placing stones on a 19-by-19 grid, competing to take control of the most territory. It is considered to be one of the world's most complex games, and is much more challenging for computers than chess. AlphaGo has built up its expertise by studying older matches and playing thousands of games against itself. Lyft strikes self-driving deal with Google's Waymo. Image copyright Getty Images US ride hailing business Lyft has formed a partnership with the Google owner's self-driving car unit Waymo to help develop self-driving vehicles. 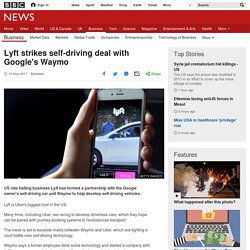 Lyft is Uber's biggest rival in the US. Many firms, including Uber, are racing to develop driverless cars, which they hope can be paired with journey-booking systems to revolutionise transport. A three-pronged attack on fake news & problematic content. Just google it: The student project that changed the world. Image copyright Getty Images "Dad, what happens when you die? 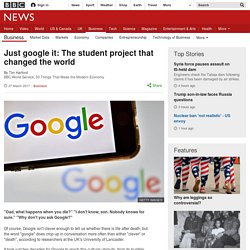 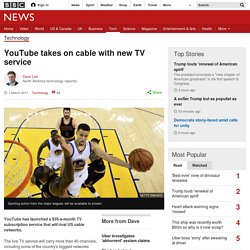 The live TV service will carry more than 40 channels, including some of the country's biggest networks including ABC, CBS, Fox, NBC and ESPN. The service will also include a "cloud DVR" that will let users record and store programming. One analyst told the BBC that YouTube posed a real threat to traditional cable companies. "YouTube is already an extremely well established video brand, and its apps are virtually everywhere," said Paul Verna of eMarketer. 'For the YouTube generation' YouTube TV is Google's live TV service. Google’s plan to make talk less toxic. Image copyright Thinkstock "Never read below the line" - that has become sensible advice for anyone tempted to look at online comments. 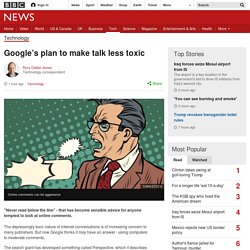 The depressingly toxic nature of internet conversations is of increasing concern to many publishers. But now Google thinks it may have an answer - using computers to moderate comments. The search giant has developed something called Perspective, which it describes as a technology that uses machine learning to identify problematic comments. Google creates new self-driving car company. Image copyright Getty Images Google is putting its self-driving car technology into a new company which it will call Waymo, the firm has announced. 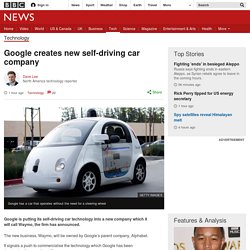 The new business, Waymo, will be owned by Google’s parent company, Alphabet. Google Alphabet Organization. Okay Google, you need a cuter name. WaveNet: A Generative Model for Raw Audio. Talking Machines Allowing people to converse with machines is a long-standing dream of human-computer interaction. The ability of computers to understand natural speech has been revolutionised in the last few years by the application of deep neural networks (e.g., Google Voice Search). However, generating speech with computers — a process usually referred to as speech synthesis or text-to-speech (TTS) — is still largely based on so-called concatenative TTS, where a very large database of short speech fragments are recorded from a single speaker and then recombined to form complete utterances.

This makes it difficult to modify the voice (for example switching to a different speaker, or altering the emphasis or emotion of their speech) without recording a whole new database. WaveNet changes this paradigm by directly modelling the raw waveform of the audio signal, one sample at a time. DeepMind AI to play videogame to learn about world. Image copyright Blizzard Google's DeepMind is teaming up with the makers of the StarCraft video game to train its artificial intelligence systems. The AI systems "playing" the game will need to learn strategies similar to those that humans need in the real world, DeepMind said. Google is trying to reinvent the whiteboard. What's big, red and supposed to be the next big thing in workplace collaboration? 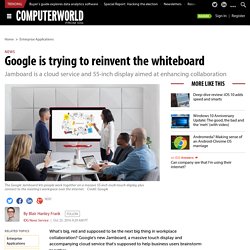 Google's new Jamboard, a massive touch display and accompanying cloud service that's supposed to help business users brainstorm together. Jamboard works like a digital whiteboard, letting users sketch out ideas, attach digital sticky notes, plus bring in content from the web into a single, constantly updating workspace. People can use Jamboard to collaborate both on the 55-inch mega-display of the same name, or using accompanying tablet and smartphone apps for iOS and Android. The Jamboard is available in private beta for business customers of Google's G Suite productivity service offering starting Tuesday. The company expects to make it generally available early next year. For companies that have already invested in using G Suite and are willing to spend tens of thousands of dollars on bringing digital whiteboards into their workplaces, Jamboard seems like an interesting option. 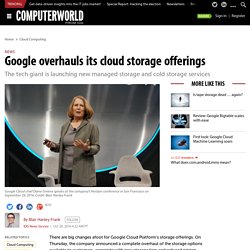 On Thursday, the company announced a complete overhaul of the storage options available to customers, complete with new storage tiers and reduced pricing. Customers that need high availability storage can use Google's new fully managed Multi-Regional Cloud Storage service, which will replicate data across multiple Google Cloud data centers in different areas for high-uptime access. The company also launched a new Coldline storage service that's designed for data accessed less than once a year, such as backups. The storage changes are part of Google’s overall pitch to capture businesses in a highly competitive cloud market.

Managed, multi-region storage will be helpful for customers that don’t want to worry about reliability, and the new Coldline storage will help GCP compete with other cold storage offerings, like Amazon Glacier. Google Translate Receives Huge Accuracy Boost Through The Power Of Neural Networks : TECH : Tech Times. When Google launched Google Translate 10 years ago, the key algorithm behind the service was Phrase-Based Machine Translation. The translations provided by the service have since vastly improved due to the developments in machine intelligence, but the recent addition of neural networks has provided Google Translate with the biggest boost that it has ever received. Language is naturally phrase-based, which is why translating between languages is not as simple as plugging in the translation of words in sentences. While computers have been developed to handle phrase-based translation, there are still nuances in languages that the machines are not able to understand.

Google has now deployed the Google Neural Machine Translation system, which utilizes machine learning and neural networks to provide a massive boost in translation accuracy. For Google Translate, the deep neural network used by Google is called an LSTM, which means long short-term memory. . © 2016 Tech Times, All rights reserved. YouTube launches offline videos, monetization program in Pakistan. Google weakens Allo chat app privacy promise. Image copyright Google Google has launched its new chat app with weaker privacy protection measures than previously promised. The company had originally said conversations within Allo would be only temporarily stored on its servers, restricting the authorities' ability to request access. However, the Verge news site revealed that Google now holds on to the data unless users take active measures to stop it. Google has confirmed the U-turn.

Privacy campaigners say the public must be kept informed about how their records are handled. Google Trips is a killer travel app for the modern tourist - The Verge. Alphabet Inc (NASDAQ:GOOGL) To Get API Management Tools In Apigee Deal. Published By: Ken Bock on September 12, 2016 07:00 am EST Alphabet Inc (NASDAQ:GOOGL) aims to buy API administration merchant Apigee in US-based $625 million arrangement which will give Google protected Multilanguage API devices utilized by organizations leading most of their accounts on the internet. Diane Green, senior VP of Google’s cloud business, said that the deal, which was reported on Thursday, provides Google a way to devices that grants back-end framework to organization to connect with portable and web applications. She said that APIs are important for how business is completed presently in the quickly developing advanced and portable commercial center.

She further added that they are centers through which organizations, accomplices, and clients collaborate, whether it is a small-scale establishment appealing on the internet for an advance or a state of offer framework sending your data to the maker. Apigee charges itself as an API administration and prescient inquiring seller. Google suspends Project Ara DIY smartphone work.

Image copyright Google Google has suspended work on Project Ara, its modular smartphone. The project, which the company launched in 2013. was designed to let users buy a basic phone and add different modules like a keyboard or other sensors, Google to expand ride-sharing service in San Francisco. Alphabet Loses Yet Another Exec from Its 'Other Bets' Division - TheStreet. Alphabet (GOOGL) is losing yet another key executive from its speculative "Other Bets" division. The founder and chief executive of GV, Alphabet's venture capital arm, Bill Maris, announced on Thursday he would be stepping down. Managing partner David Krane will replace Maris. Maris has been a key figure at GV since its launch in 2009. GV, which started as Google Ventures, invests in five main industries: consumer, life science & health, data & artificial intelligence, enterprise and robotics. To date, the investment arm has invested in over 300 companies.

SMALL INVESTMENT, BIG POTENTIAL. Over the years, GV has emerged as a prominent player in Silicon Valley as its investments handsomely paid off. What Google Learned From Its Quest to Build the Perfect Team. So Rozovsky started looking for other groups she could join. Why Google wants your medical records. Google developing kill switch for AI.