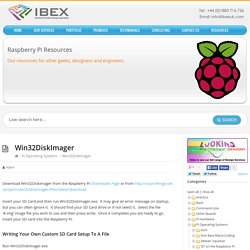 It may give an error message on startup, but you can often ignore it. It should find your SD Card drive or if not select it. Select the file '#.img' image file you wish to use and then press write. Once it completes you are ready to go, insert your SD card into the Raspberry Pi. Writing Your Own Custom SD Card Setup To A File Run Win32DiskImager.exe Ensure the Device drop down box has the drive your card is inserted into. Press the folder button and select the folder and filename you want to use to write your image file to. Press the Read button. OpenELEC Mediacenter - Home. Introducing Windows Azure WebJobs. Azure WebJobs documentation resources. Overview This topic links to documentation resources about how to use Azure WebJobs and the Azure WebJobs SDK. 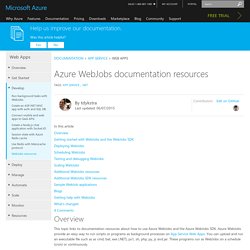 Azure WebJobs provide an easy way to run scripts or programs as background processes on App Service Web Apps. You can upload and run an executable file such as as cmd, bat, exe (.NET), ps1, sh, php, py, js and jar. These programs run as WebJobs on a schedule (cron) or continuously. The WebJobs SDK makes it easier to use Azure Storage. Creating, deploying, and managing WebJobs is seamless with integrated tooling in Visual Studio. The WebJobs dashboard in the Azure portal provides powerful management capabilities that give you full control over the execution of WebJobs, including the ability to invoke individual functions within WebJobs. Getting started with WebJobs and the WebJobs SDK. Azure WebJobs are awesome and you should start using them right now! No really, they’re totally awesome! 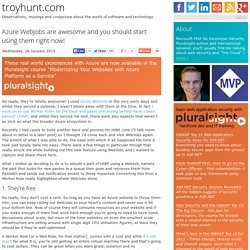 I used Azure WebJobs in the very early days and whilst they served a purpose, I wasn’t blown away with them at the time. In fact I went on to use Worker Roles for the back end paste processing behind Have I been pwned? (HIBP) and whilst they served me well, there were also aspects that weren’t as slick as what the broader Azure ecosystem is. Recently I had cause to build another back end process for HIBP (one I’ll talk more about in detail in a later post) so I thought I’d come back and visit WebJobs again. The extent of what I was able to do, the ease with which it all happened the time it took just totally blew me away. What I ended up deciding to do is to rebuild a part of HIBP using a WebJob, namely the part that looks for new pastes in a queue then goes and retrieves them from Pastebin and sends out notification emails to those impacted. 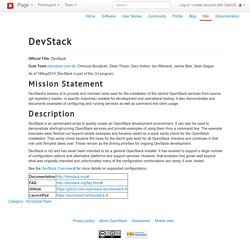 Actor model. Orleans: a Platform for Cloud Computing. Building interactive services that are scalable and reliable is hard. 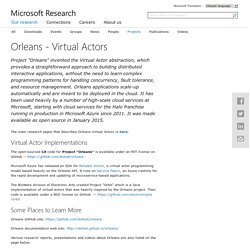 Interactivity imposes strict constraints on availability and latency, as that directly impacts end-user experience. To support a large number of concurrent user sessions, high throughput is essential. The traditional three-tier architecture with stateless front-ends, stateless middle tier and a storage layer has limited scalability due to latency and throughput limits of the storage layer, which has to be consulted for every request. A caching layer is often added between the middle tier and storage to improve performance.

However, a cache loses most of the concurrency and semantic guarantees of the underlying storage layer. The actor model offers an appealing solution to these challenges by relying on the function shipping paradigm. Another view of distributed systems programmability is through the lens of the object-oriented programming (OOP) paradigm. Petabridge. Much of the code you’re writing isn’t even coming close to your potential. 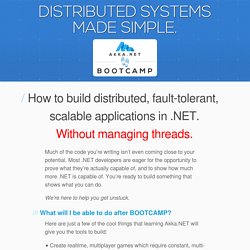 Most .NET developers are eager for the opportunity to prove what they’re actually capable of, and to show how much more .NET is capable of. You’re ready to build something that shows what you can do. We’re here to help you get unstuck. What will I be able to do after BOOTCAMP? Here are just a few of the cool things that learning Akka.NET will give you the tools to build: Create realtime, multiplayer games which require constant, multi-directional synchronization between players and dataEasily parallelize processes that take too long to run seriallyCreate a dynamic bidding system to optimize inventory, pricing, and profit on-the-flyDo concurrent data processing without worrying about thread management, locks, mutexes, etc.Simply model a realtime traffic system and make dynamic routing decisions based on the latest data Sweet! What is Akka.NET? One of the biggest benefits of Akka.NET? Concurrency, without the pain. Enterprise integration patterns.