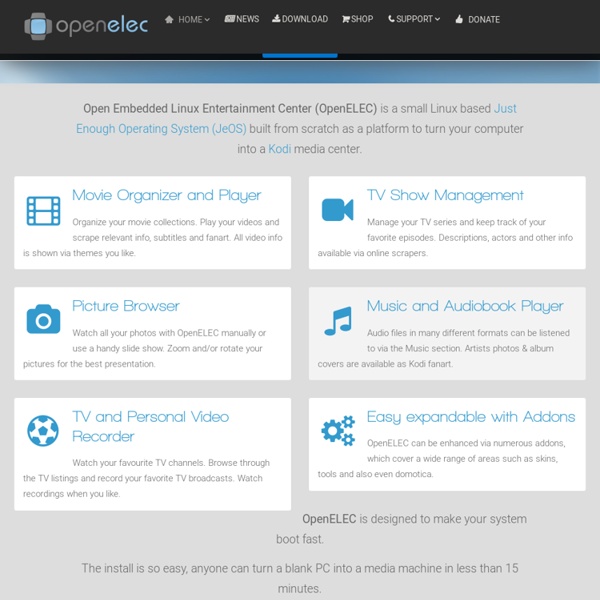 If you find OpenELEC useful, then we'd really appreciate it if you'd consider contributing to the project however you can. Donating is the easiest, and with options to use PayPal, Flattr or Bitcoin it's also pretty flexible. We haven't set up our donation pages to suggest a donation amount, instead we'd like you to just donate whatever you feel comfortable with - whether it's little or a lot we'll certainly appreciate it. Note: You do not need a PayPal account to make a PayPal donation. It's not the only way to help though...

Raspberry Pi 2 Media Center: Kodi on XBian Author: Timothy WoodDate: April 2015 Overview This guide walks through the construction and configuration of a home media center from parts to running system. After following these steps, you will have a running Kodi media server on a Raspberry Pi 2 in an Altoids tin case, ready for you to attach a thumb drive or hard drive with your media. These steps detail the method I used in my build with the hardware and software choices I made, but there are other options that you can choose. I included some notes about alternative choices in the steps where alternatives are available.

How to use a multi layered stencil. Stencil overlays. Michael Jackson multi layered stencil from The Stencil Studio. Stenciling Tutorials Single layer stencils will give great results and are very easy to use, simply position the stencil, paint it and then remove it. Multi layered stencils or stencil overlays can be used to paint one colour on top of another with even greater results. It's amazing how a simple design can be transformed into something very impressive, and you don't need to be an artist, just follow our simple steps below. We're going to use The Stencils Studio's 4 layered Michael Jackson stencil for this tutorial but the principle is the same for any number of stencil layers. Layer 1

Media Streaming with Windows 7 - Engineering Windows 7 We’ve blogged about a number of features related to home networking and media in Windows 7. A scenario which brings all these together in a pretty cool way is Media Streaming. This scenario allows you to use a Windows 7 PC as a hub for media sharing—where you can share media with other PCs and devices on your home network via streaming, and even stream this information securely over the internet.

BerryBoot - The simplest way to install and load multiple operating systems on a Raspberry Pi The revolutionary cheap and small Raspberry Pi mini computer is so popular now it hardly needs an introduction. After assembling all the bits and pieces needed to run an RPi, you will need to format and load the SD card with an compatible linux operating system of your choice. Here is easy and fast way to get this done. While you can always use the Raspbmc GUI installer to format and install the RPi optimized raspbmc OS, BerryBoot is something I would recommend if you plan to have more power, options and choices. Blog — TRXL 1. The Trippy ’60s, Courtesy of a Master On a recent morning in a townhouse office on East 32nd Street in Manhattan, reality was treading closely, and somewhat strangely, in fiction’s footsteps. The client sitting in the conference room, waiting for his real-life ad man, was the show’s creator, Matthew Weiner.

Ultimate Raspberry Pi Configuration Guide The Raspberry Pi is a great thing: it is real computer, it is cheap ($40), it can interface with electronics, talk to the web and has full HDMI support. However it runs on Linux, which I have a love-hate relationship with. I love the idea of Linux, but when I start messing around the command line and downloading packages and installing things, I often get lost. I've assembled bits and pieces from various online posts and guides into this Instructable, which is what I call the "Ultimate Raspberry Pi Configuration Guide". What this Instructable does is to set up a wireless Raspberry Pi that allows you to:

A laser-cut wooden record that actually plays music If you've ever been curious about the materials that can be used for making a record, you can add a sheet of wood to the list. Instructables user amandaghassaei shows us exactly how to use a laser cutter to make functioning music records out of a piece of wood. And the results are as visually beautiful as they are aurally beautiful. The creator, Amanda Ghassaei writes: These records were cut on an Epilog 120 Watt Legend EXT to a theoretical precision of 1200dpi (the kerf of the cut and some tricks I used to avoid crashing the laser cutter dropped the actual precision down by ~1/6). The audio on the records has a bit depth between 4-5 (typical mp3 audio is 16 bit) and a sampling rate up to about 4.5kHz (mp3 is 44.1kHz).

The Works of Dickson Chow Plant Friends MKII Article Date: July 13th, 2014. Updated: August 4th, 2014. What is Plant Friends? Plant Friends is a plant environmental monitor system. It monitors the soil moisture, air temperature, and air humidity of your indoor plant(s) and will alert you via email and SMS when your plants are thirsty. Setting up OpenELEC on the Raspberry Pi It’s been a while but I have got OpenELEC happily working on my Raspberry Pi. I want to use this blog post to work through some of the issues I had and how I solved them. What is OpenELEC, well: “OpenELEC is a streamlined Linux distribution that includes only the essential software components and drivers needed to run XBMC and a handful of supporting apps/services” OpenELEC itself was originally designed for other platforms and is currently in the process of porting its software over to Raspberry Pi, therefore it is in a constant state of change.

7 cool Raspberry Pi 2 projects (and a sweet deal) Raspberry Pi 2 is a small and affordable computer that allows you to do just about anything you can imagine. From creating cameras to watch wildlife, to digital picture frames, to automating your home, many of these things can be achieved DIY-style with the affordable micro-computer Over on The Next Web Deals, there is a bundle deal to help you get started with Raspberry Pi 2, complete with the Raspberry Pi 2 itself, a starter kit, and give how-to videos to help you get started. You can get it all for $115 (that’s 85 percent off the original price of $804).

Display - d-torso Paper craft by Aki Co.,Ltd. The d-torso Mini ADAM & EVE Towers are constructible cardboard craft models made of precision laser-cut parts. The d-torso EVE is made of 123 pieces, and ADAM of 128. With no glue or scissors required for assembly, the models are designed for everyone’s building enjoyment. The d-torso was originally invented by Yuki Matsuoka in 1998 to support his wife’s exhibition of knitwear, and the human shape has been its driving theme ever since. We have developed original technology to shape models of objects not by their outer surfaces, but in precision slices.

Guide To Test a Remote and Remap Keys This guide will help demonstrate the process to get a remote functioning properly. Plug in your reciever and test out your remote. Two things may happen. Your remote doesn't do anything or your remote works, but you want to be able to change what the keys do. You will need to have SSH access to your box. When you log in via SSH type the command irw.