Weather Vocabulary in English – English Study Page. Words Related to “rain” and Their Meanings: Rain is drops of water from clouds. 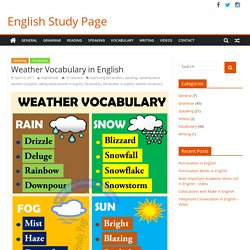 Heavy / constant / steady /pouring rain or Downpour is a lot of rain in a short time. Light / gentle rain or Drizzle means not heavy rain. Rainfall is the amount of rain which falls. Deluge is a severe flood. Rainstorm is a storm with heavy rain. A drop of rain / a droplet / a raindrop is a single drop of rain. Rainbow is a curved shape of different colours seen in the sky. Shower is a short period of rain or snow. Words Related to “snow” and Their Meanings: Snow means atmospheric water vapor frozen into ice crystals and falling in light white flakes or lying on the ground as a white layer. Parts of Human Body – English Study Page. Human Body Parts; Please follow visual expressions and expressions about human body parts; Head Meaning: The uppermost part of the body, containing the brain and the eyes, ears, nose, mouth, and jaws.Example: My head aches. 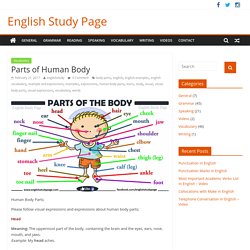 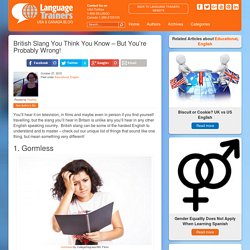 British slang can be some of the hardest English to understand and to master – check out our unique list of things that sound like one thing, but mean something very different! 1. Gormless What you might think it means: A shirt that doesn’t have any arm holes or a person with no shape. What it actually means: Completely and utterly clueless; having no idea what’s going on. How to use it: “The new guy is completely gormless – he tried to send a fax with the photocopier!” List of Transition Words. Anyone has ever received criticism about a written assignment has quite possibly been told to use more transition words, which is where a list of transition words come in handy. 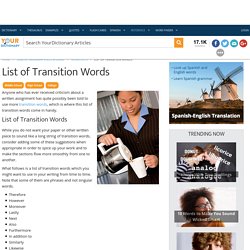 Ba Ba Dum. 45 Ways To Avoid Using The Word 'Very'. Three Telling Quotes About ‘Very’ Substitute ‘damn’ every time you’re inclined to write ‘very;’ your editor will delete it and the writing will be just as it should be.

~Mark Twain‘Very’ is the most useless word in the English language and can always come out. More than useless, it is treacherous because it invariably weakens what it is intended to strengthen. ~Florence KingSo avoid using the word ‘very’ because it’s lazy. A man is not very tired, he is exhausted. If you enjoyed this, you will love: If you want to learn how to write a book, join our Writers Write course. by Amanda Patterson © Amanda Patterson. I like the idea of having info posters like this for grown-ups around offices or homes. great art-projects.