Farnam Street - Huffington Post India - Indian News, Politics, Entertainment and Opinion. Latest news, sport and comment from the Guardian. Daily Mail Online. The Eccentric Artwork of Rebecca Horn. If Rebecca Horn is not a cult artist, it’s hard to define what we mean by ‘cult artist’. 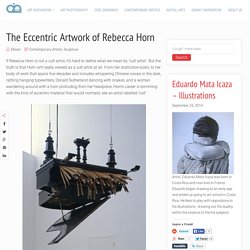 But the truth is that Horn isn’t really viewed as a cult artist at all. From her distinctive looks, to her body of work that spans five decades and includes whispering Chinese voices in the dark, rattling hanging typewriters, Donald Sutherland dancing with snakes, and a woman wandering around with a horn protruding from her headpiece, Horn’s career is brimming with the kind of eccentric material that would normally see an artist labelled ‘cult.’ Horn, born in Germany during the latter stages of the Second World War, sits alongside Joseph Beuys and Anselm Kiefer as one of her nations greatest contemporary artists.

Like Kiefer, it is easy to point to her homelands tumultuous recent history as providing a backdrop for her art, particular in light of her attempt to recreate Germany’s past for Skulptor Projekte Munster. No doubt the young artist experienced the scars of wartime defeat. Artist Inspiration - Artists Inspire Artists. The Gravity Defying Paintings of Jacek Yerka. Profile: Michael Bierut: Statement I grew up in Ohio in the 60s in a suburban milieu where design was seldom seen and never discussed. 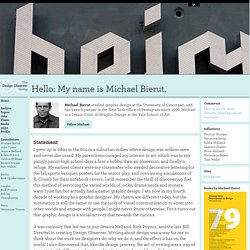 My parents encouraged my interest in art, which was in my pimply junior high school days a first a hobby, then an obsession, and finally a refuge. My earliest clients were my classmates who needed decorative lettering for the fall sports banquet, posters for the senior play, and convincing simulations of R. Crumb for their notebook covers. I still remember the thrill of discovering that this method of servicing the varied worlds of jocks, drama nerds and stoners wasn’t just fun but actually had a name: graphic design.

It was curiosity that led me to join Jessica Helfand, Rick Poynor, and the late Bill Drenttel in creating Design Observer. Design Observer was conceived in the world without Twitter or Facebook. Steampunk Art, custom metal art decoration like indoor lamps, clocks, bowls and outdoor garden lights etc. The Stories That Only Artists Can Tell  Here is a pitch for artists to write their own stories, their autobiographies, because there aren't many fine artists who have done so. 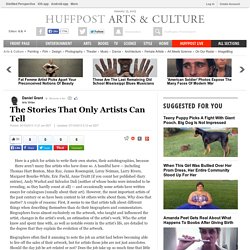 A handful have -- including Thomas Hart Benton, Man Ray, James Rosenquist, Leroy Neiman, Larry Rivers, Margaret Bourke-White, Eric Fischl, Anne Truitt (if you count her published diary entries), Andy Warhol and Salvador Dali (neither of whose books were intended to be revealing, so they hardly count at all) -- and occasionally some artists have written essays for catalogues (usually about their art). However, the most important artists of the past century or so have been content to let others write about them. Why does that matter? A couple of reasons: First, it seems to me that artists talk about different things when describing themselves than do their biographers and commentators. Biographers focus almost exclusively on the artwork, who taught and influenced the artist, changes in the artist's work, an estimation of the artist's work. Farnam Street - The Buffett Formula. 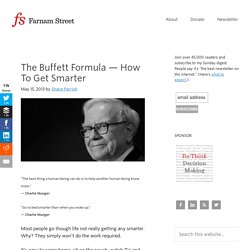 Why? They simply won’t do the work required. It’s easy to come home, sit on the couch, watch TV and zone out until bed time rolls around. Sure you can go into the office the next day and discuss the details of last night’s episode of Mad Men or Game of Thrones. But you can acquire knowledge if you want it. In fact there is a simple formula, which if followed is almost certain to make you smarter over time.

It involves a lot of hard work. SOLO - Sense of Life Objectivists. Now we're at the halfway point of our architectural debate over at my main blog 'Not PC,' here's a brief meditation on what architecture is all about. 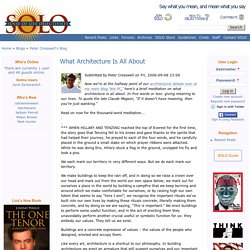 In five words or less: giving meaning to our lives. To quote the late Claude Megson, "If it doesn't have meaning, then you're just wanking. " Read on now for the thousand-word meditation... . . *** WHEN HILLARY AND TENZING reached the top of Everest for the first time, the story goes that Tenzing fell to his knees and gave thanks to the spirits that had helped their journey; he prayed to each of the four winds, and he carefully placed in the ground a small stake on which prayer ribbons were attached. SOLO - Sense of Life Objectivists. What is Objectivism? 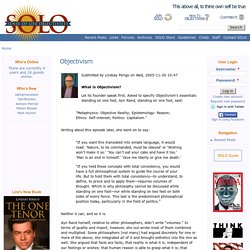 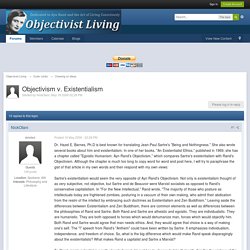