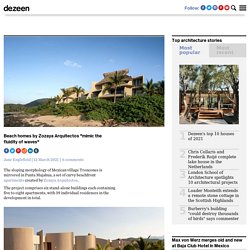 The project comprises six stand-alone buildings each containing five to eight apartments, with 39 individual residences in the development in total. Each of the buildings has distinctive curved masonry walls, take their forms from Troncones' coastal surroundings. Feldman Architecture updates 1970s residence overlooking San Francisco Bay. American studio Feldman Architecture has overhauled parts of a hillside home in the town of Sausalito for a retired couple with an extensive collection of albums, books and soda bottles. 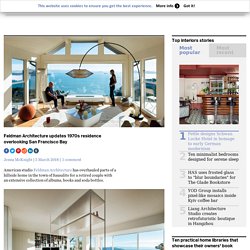 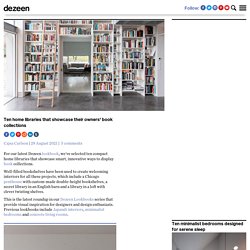 Well-filled bookshelves have been used to create welcoming interiors for all these projects, which include a Chicago penthouse with custom-made double-height bookshelves, a secret library in an English barn and a library in a loft with clever twisting shelves. This is the latest roundup in our Dezeen Lookbooks series that provide visual inspiration for designers and design enthusiasts. Previous lookbooks include Japandi interiors, minimalist bedrooms and concrete living rooms. Barn conversion, UK, by Tonkin Liu. Gui Paoliello Arquiteto completes curved house in Brazil's Morro Cavado. Brazilian architect Gui Paoliello has completed a semi-circular house elevated above the Morro Cavado valley, using simple construction techniques that are suited to the remote site. 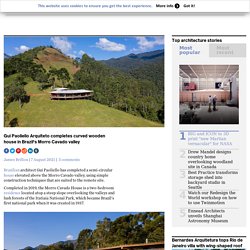 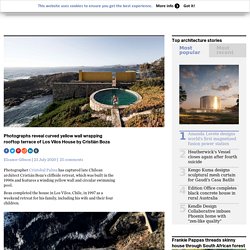 Boza completed the house in Los Vilos, Chile, in 1997 as a weekend retreat for his family, including his wife and their four children. Having only seen Los Vilos House in photos from the 1990s, Palma arranged to visit the site in September last year through Boza's son, Cristián Boza Wilson. The Chilean photographer said the late architect managed to see the new set of images just before he died this year and was pleased with them.

"I knew that Boza's health was not very good and I wanted to photograph his house while he was still around," Palma told Dezeen. CO-LAB designs Casa Areca to merge with lush landscape in Tulum. Tropical plants surround a holiday home by Mexican firm CO-LAB Design Office, which has large openings to help keep the interior "cool and fresh throughout the year". 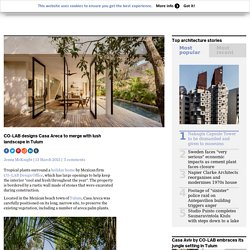 The property is bordered by a rustic wall made of stones that were excavated during construction. Located in the Mexican beach town of Tulum, Casa Areca was carefully positioned on its long, narrow site, to preserve the existing vegetation, including a number of areca palm plants. Designed and built by local firm CO-LAB Design Office, the house is meant to serve as a tranquil retreat that embraces its tropical setting.

"Light, breezy rooms frame the surrounding greenery while moving shadows decorate the walls, creating a peaceful atmosphere optimal for unwinding after a beach day," said the studio. Reinforced concrete and concrete masonry units (CMUs) were used to build the exterior walls, which are finished with white, polished cement. A House Made of Concrete Inspired by Brazilian Modernism (House Tour) Inside a Heritage Home with a New Contemporary Addition (House Tour) A Japanese-Inspired Home That Experiments with Interior Design, Space and Usability (House Tour) Girl Living Off the Grid, Build The Most Beautiful Bamboo House Near My Village. 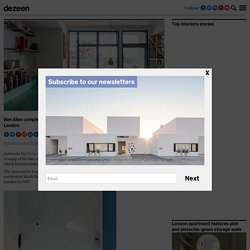 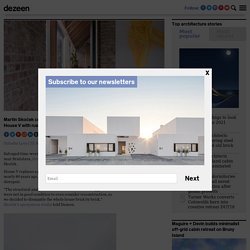 House V replaces a property that had been built on the site nearly 80 years ago, but over time had fallen into complete disrepair. "The structural analysis showed that the load-bearing parts were not in good condition to even consider reconstruction, so we decided to dismantle the whole house brick by brick," Skoček's eponymous studio told Dezeen. The new 185-square-metre home, which is occupied by a young family of four, has linear massing and a gabled titanium-zinc roof, emulating the shape of traditional agricultural buildings that dot the rural outskirts of Bratislava. It also has a smooth, white-painted facade and aluminium-framed windows. However, the studio didn't completely do away with the bricks that formed the structure of the old house – they instead have been used to line House V's interiors. Worn brick surfaces continue in the master bedroom. Timothee Mercier transforms rural French farm building into MA House.

Architect Timothee Mercier of Studio XM has converted a ruined farm building in France into an "intimate refuge" for his parents. 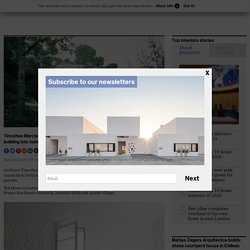 MA House is located in Vaucluse, a picturesque part of southeast France that boasts vineyards, lavender fields and quaint villages. It takes over an old farmhouse on a plot of land that architect Timothee Mercier's parents purchased back in 2001. Mercier's parents initially failed to obtain planning permission to turn the dilapidated structure into a home, so decided to build a property on a neighbouring forested hillside. Casa Flotanta by Benjamin Garcia Saxe Architecture is above a forest. A series of pillars raise the interconnected rooms of this house by Benjamin Garcia Saxe Architecture above the tree tops of the surrounding Costa Rican forest (+ slideshow). 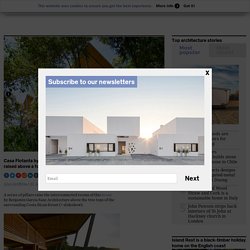 The San Jose office of Benjamin Garcia Saxe Architecture was asked to design the family home for a steeply sloping site, and chose to lift the building off the ground to optimise views of the Pacific Ocean. Unlike nearby properties, the architects also wanted to avoid cutting into the landscape to create a flat piece of land on which to build. "We essentially lifted the house up into the air on a series of piloti which gives the impression that it is floating above the hillside," explained the architects.

"By doing this we saved the immense cost of creating soil retention walls around the site. " Studio Saxe. Dezeen Daily is sent every day and contains all the latest stories from Dezeen. Dezeen Weekly is a curated newsletter that is sent every Thursday, containing highlights from Dezeen. Dezeen Weekly subscribers will also receive occasional updates about events, competitions and breaking news. We will only use your email address to send you the newsletters you have requested. We will never give your details to anyone else without your consent. You can unsubscribe at any time by clicking on the unsubscribe link at the bottomof every email, or by emailing us at privacy@dezeen.com.

For more details, please see our privacy notice. Dezeen Daily is sent every day and contains all the latest stories from Dezeen. Dezeen Weekly is a curated newsletter that is sent every Thursday, containing highlights from Dezeen. We will only use your email address to send you the newsletters you have requested. For more details, please see our privacy notice. LA couple builds backyard cottage, then moves-in from main home. Modern & Mayan craft inspire quake-proof homes, learning coop. 3-story container townhouse shines in street art vibrant alley. Apple architect picks a small prefab to savor CA countryside. Artist builds his Savannah studio with shipping containers.