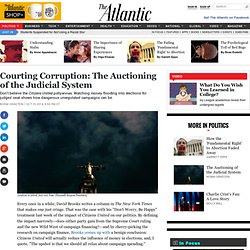 Watching money flooding into elections for judges' seat shows how dangerous unregulated campaigns can be. Justice is blind, but not free. (Russell Boyce/Reuters) Every once in a while, David Brooks writes a column in The New York Times that makes one just cringe. That was the case with his "Don't Worry, Be Happy" treatment last week of the impact of Citizens United on our politics. Without mentioning his good friend's name, E.J. I have told this story before, but it bears repeating. At the same time, the desperation to raise money means lawmakers pandering to big donors or shaking them down—trading access for favors, or threatening retribution. Lawrence Lessig v. Citizens United. Last spring, Lawrence Lessig, a fifty-three-year-old Harvard legal theorist who opposes the influence of money in politics, launched a counterintuitive experiment: the Mayday PAC, a political-action committee that would spend millions of dollars in an attempt to elect congressional candidates who are intent on passing campaign-finance reform—and to defeat those who are not. 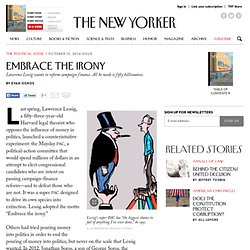 It was a super PAC designed to drive its own species into extinction. Lessig adopted the motto “Embrace the irony.” Others had tried pouring money into politics in order to end the pouring of money into politics, but never on the scale that Lessig wanted. In 2012, Jonathan Soros, a son of George Soros, the billionaire and liberal donor, raised and spent $2.7 million to help nine candidates committed to campaign-finance reform. Lessig and his co-founder, the Republican consultant Mark McKinnon, planned to spend more than four times that amount in the six months leading up to midterm elections, on November 4th. How the Koch Brothers Fleeced America. Who are the Koch Brothers? Doubling Down on Democracy - Michael Ignatieff. Francis Fukuyama is still bullish on where history is headed, but Americans should worry: republics can decay. 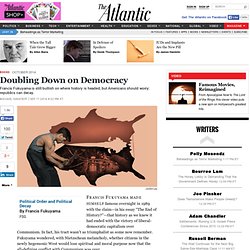 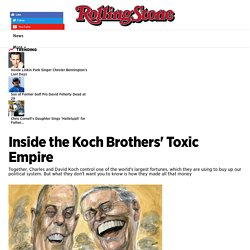 Brothers Charles and David are each worth more than $40 billion. The electoral influence of the Koch brothers is similarly well-chronicled. The Kochs are our homegrown oligarchs; they've cornered the market on Republican politics and are nakedly attempting to buy Congress and the White House. Citizens United v. Federal Election Commission. Citizens United v. 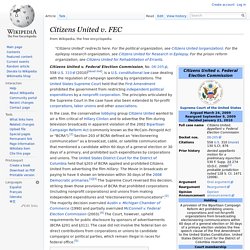 Federal Election Commission, No. 08-205, 558 U.S. 310 (2010)[dead link], is a U.S. constitutional law case dealing with the regulation of campaign spending by organizations. The United States Supreme Court held that the First Amendment prohibited the government from restricting independent political expenditures by a nonprofit corporation. The principles articulated by the Supreme Court in the case have also been extended to for-profit corporations, labor unions and other associations. Background[edit] The complainant alleged that the release and distribution of FAHRENHEIT 9/11 constituted an independent expenditure because the film expressly advocated the defeat of President Bush and that by being fully or partially responsible for the film's release, Michael Moore and other entities associated with the film made excessive and/or prohibited contributions to unidentified candidates.

Before the Supreme Court[edit] Opinions of the Court[edit] Overview[edit] Common Cause – Fighting Big Money. In a series of decisions including Citizens United v. 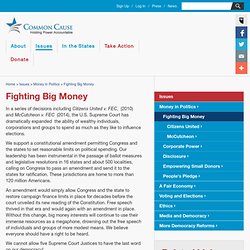 FEC, (2010) and McCutcheon v. FEC (2014), the U.S. Supreme Court has dramatically expanded the ability of wealthy individuals, corporations and groups to spend as much as they like to influence elections. We support a constitutional amendment permitting Congress and the states to set reasonable limits on political spending. Our leadership has been instrumental in the passage of ballot measures and legislative resolutions in 16 states and about 500 localities, calling on Congress to pass an amendment and send it to the states for ratification.