Inside the Koch Brothers' Toxic Empire 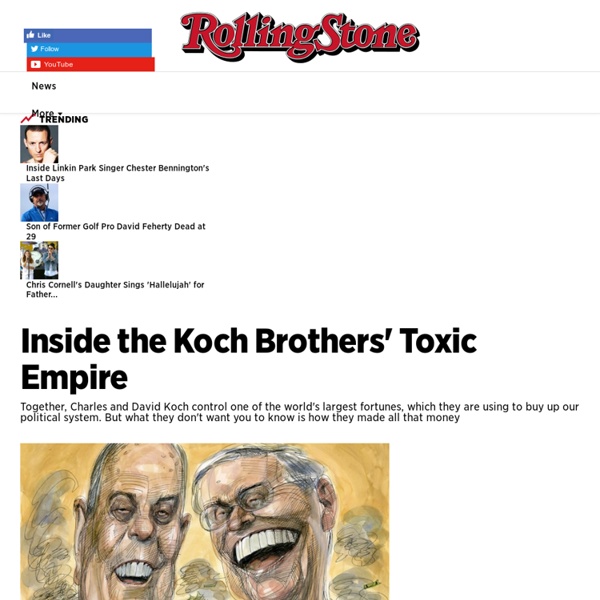 The enormity of the Koch fortune is no mystery. Brothers Charles and David are each worth more than $40 billion. The electoral influence of the Koch brothers is similarly well-chronicled. What is less clear is where all that money comes from. But Koch Industries is not entirely opaque. Under the nearly five-decade reign of CEO Charles Koch, the company has paid out record civil and criminal environmental penalties. The volume of Koch Industries' toxic output is staggering. For Koch, this license to pollute amounts to a perverse, hidden subsidy. The toxic history of Koch Industries is not limited to physical pollution. And in one of the great ironies of the Obama years, the president's financial-regulatory reform seems to benefit Koch Industries. It is often said that the Koch brothers are in the oil business. The company controls at least four oil refineries, six ethanol plants, a natural-gas-fired power plant and 4,000 miles of pipeline. It was a boom business. Arizona Sen. Related:  Koch Brothers Manipulating Policy for Profit • Koch's $ bought power - now run country

rx drugs Scott Pruitt Is Carrying Out His E.P.A. Agenda in Secret, Critics Say - The New York Times Together with a small group of political appointees, many with backgrounds, like his, in Oklahoma politics, and with advice from industry lobbyists, Mr. Pruitt has taken aim at an agency whose policies have been developed and enforced by thousands of the E.P.A.’s career scientists and policy experts, many of whom work in the same building. “There’s a feeling of paranoia in the agency — employees feel like there’s been a hostile takeover and the guy in charge is treating them like enemies,” said Christopher Sellers, an expert in environmental history at Stony Brook University, who this spring conducted an interview survey with about 40 E.P.A. employees. Such tensions are not unusual in federal agencies when an election leads to a change in the party in control of the White House. Video Allies of Mr. “E.P.A. is legendary for being stocked with leftists,” said Steven J. Mr. William D. “Reforming the regulatory system would be a good thing if there were an honest, open process,” he said. Mr.

Another Climate Alarmist Admits Real Motive Behind Warming Scare Fraud: While the global warming alarmists have done a good job of spreading fright, they haven’t been so good at hiding their real motivation. Yet another one has slipped up and revealed the catalyst driving the climate scare. We have been told now for almost three decades that man has to change his ways or his fossil-fuel emissions will scorch Earth with catastrophic warming. Scientists, politicians and activists have maintained the narrative that their concern is only about caring for our planet and its inhabitants. If they were honest, the climate alarmists would admit that they are not working feverishly to hold down global temperatures — they would acknowledge that they are instead consumed with the goal of holding down capitalism and establishing a global welfare state. Have doubts? “One has to free oneself from the illusion that international climate policy is environmental policy. So what is the goal of environmental policy? “What if global warming isn’t only a crisis?”

Why the Scariest Nuclear Threat May Be Coming from Inside the White House On the morning after the election, November 9, 2016, the people who ran the U.S. Department of Energy turned up in their offices and waited. They had cleared 30 desks and freed up 30 parking spaces. They didn’t know exactly how many people they’d host that day, but whoever won the election would surely be sending a small army into the Department of Energy, and every other federal agency. The morning after he was elected president, eight years earlier, Obama had sent between 30 and 40 people into the Department of Energy. By afternoon the silence was deafening. “Teams were going around, ‘Have you heard from them?’ “The election happened,” remembers Elizabeth Sherwood-Randall, then deputy secretary of the D.O.E. Trump’s people “mainly ran around the building insulting people,” says a former Obama official. Even in normal times the people who take over the United States government can be surprisingly ignorant about it. That had proved to be a huge undertaking. This was a loss. “Who by?

Walmart insurance The Ideologues Who Want to Destroy Democracy to Save Capitalism The Ideologues Who Want to Destroy [...] James Buchanan flashes a smile at a news conference in 1986 at George Mason University after it was announced that he is the winner of the Nobel Memorial Prize in economic science. (Photo by Don Emmert/AFP/Getty Images) Last week we presented you with historian Nancy MacLean’s fascinating story of James McGill Buchanan — the father of “public choice economics” whose writing was influential to a number of ideologues on the far right. George Monbiot, a columnist for The Guardian, has more on the history of Buchanan and his twisted ideas: He aimed, in short, to save capitalism from democracy.In 1980, he was able to put the program into action. Read more from Monbiot in The Guardian and read an excerpt from Nancy MacLean’s Democracy in Chains.

There's No Time to "Debate" Climate Change: We Need Global Transformation The reality is that we're already seeing the victims of climate change. (Photo: Erik de Haan / Flickr) Corporate mainstream media outlets are missing something very important as the general election draws closer and both Democrats and Republicans start freaking out that it'll be the end of the world if the other party gets into the White House. Media are completely ignoring the fact that unless we do something right now to fundamentally change what fuels our economy, it actually will be the end of the world as know it. For the fourth time this year, NASA announced that last month was the warmest such month on record, with sea and land temperatures at 1.11 degrees Celsius warmer in 2016 than the average April temperature between 1951 and 1980. In other words, the planet is getting warmer and warmer, and we're setting more and more planetary records with every passing month. See more news and opinion from Thom Hartmann at Truthout here.

alec-meeting-denver-conservatives?akid=15891.2675170 Photo Credit: Ken Durden / Shutterstock.com This post originally appeared at Exposed by CMD. Denver’s massive Blue Bear will be peering in the windows as US Education Secretary Betsy DeVos headlines the 44th American Legislative Exchange Council (ALEC) Annual Meeting being held at the Colorado Convention Center’s Hyatt Regency Hotel July 19-21. Other big names speaking at the event include Trump defender-in-chief Newt Gingrich, Labor Secretary Alexander Acosta, Secretary of the Interior Ryan Zinke, Republican pollster Frank Luntz and local megadonor and light beer magnate Peter Coors, who chairs the right-wing Coors Foundation. The Center for Media and Democracy reported that there will be a debate on the ALEC draft model bill to repeal the 17th Amendment, but many other controversial issues will be on the ALEC agenda as the meeting gets underway tomorrow. College Sexual Assault Takes Center Stage Sexual harassment and sexual assault have been a crisis on US college campuses for decades.

Boeing Got $7,250 In Tax Breaks For Every $1 It Spent Lobbying When it comes to great investments, it's hard to beat collecting $7,250 for every $1 you spend. That's the benefit Boeing Corp. will reap from a ramped-up lobbying push in Washington state that ended with a massive $8.7 billion tax subsidy, according to an analysis of lobbying data released Thursday. The tax break came as part of a deal to keep production of a new jet, the 777X, in the Seattle area. Lobbying data is notoriously difficult to parse -- matching individual dollars to specific legislative priorities is often impossible. It's plausible that the company could have achieved the same result with a single phone call, given how terrified state officials were that the company might ship high-paying jobs elsewhere. The governor's office had estimated that Washington would lose an estimated 20,000 jobs and more than $20 billion in economic activity if Boeing took production of the new jets elsewhere. In the aftermath, Boeing threw state lawmakers a thank-you party.

The Deep History of the Radical Right’s Stealth Plan for America Charles Koch, 79, in his office at Koch Industries in Wichita, Kansas, on July 29, 2015. (Photo by Nikki Kahn/The Washington Post via Getty Images) Author Nancy MacLean has unearthed a stealth ideologue of the American right. Kristin Miller talked with Nancy MacLean about her books and the influence of James McGill Buchanan on our politics both overt and covert. Kristin Miller: Did you know anything about Buchanan before you started your research? Nancy MacLean: I did not. KM: Just what is his theory of “public choice economics”? NM: Buchanan was trained at the University of Chicago and was part of the same milieu as Milton Friedman and Friedrich Hayek and others whose names are more well known. His theory of the motives of public actors was so cynical as to be utterly corrosive of the norms of a democratic society, as people pointed out along the way, but he would not listen. — Nancy MacLean KM: How does that theory flow into the idea that it is democracy versus liberty? NM: Yes.

Fossil Fuel Industry-Funded Attorneys General Try to Block ExxonMobil Climate Fraud Probe You could call it the battle of the attorneys general: one side representing the public interest, exactly what attorneys general are supposed to do; the other side representing the special interests, exactly what they are not supposed to do. In late March, 17 attorneys general held a press conference to announce they will defend the new federal rule curbing power plant carbon emissions and investigate energy companies that may have misled investors and the public about climate risks. They call themselves AGs United for Clean Power, and so far attorneys general from California, Massachusetts, New York and the Virgin Islands have launched investigations of ExxonMobil, the world’s largest publicly traded oil company, for fraud. In response, Texas Attorney General Ken Paxton and Alabama Attorney General Luther Strange decided to push back. Fishing expedition? Based on that preliminary evidence, there is strong justification for Walker and the other AGs to investigate further.

It Looks Like the Kochs' Dream of a Right-Wing Constitutional Convention Has Been Roadblocked Photo Credit: DonkeyHotey / Flickr Creative Commons This year's legislative season saw a strong push in the states from right-wing groups, bankrolled by the Koch brothers and other ultra-conservative billionaires, hoping to convene a national constitutional convention in order to inject rigid fiscal constraints into our country's founding document. Advocates of a federal "balanced budget amendment" (BBA) picked up two more states, Wyoming and Arizona, in their drive to win the 34 resolutions needed to bypass Congress and convene a convention to propose changes to the U.S. That momentum, however, was blunted by surprisingly successful campaigns to rescind convention calls in three states, New Mexico, Maryland, and Nevada. Two steps forward and three steps back…from the brink of a political experiment untried since 1787. While amendments proposed by Congress have been adopted 17 times since the Constitution's ratification, a constitutional convention has never been called.