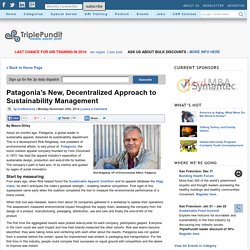 By Maura Dilley About six months ago, Patagonia, a global leader in sustainable apparel, dissolved its sustainability department. This is a development Rick Ridgeway, vice president of environmental affairs, is very proud of. Patagonia, the iconic outdoor apparel company founded by Yvon Chouinard in 1973, has lead the apparel industry’s exploration of sustainable design, production and end-of-life for textiles. The company’s path is hard won, lit by metrics and guided by sages of social innovation. Start by measuring Four years ago, when Rick helped found the Sustainable Apparel Coalition and its apparel database the Higg Index, he didn’t anticipate the index’s greatest strength – enabling creative competition. When that tool was released, teams from about 30 companies gathered in a workshop to assess their operations. The first time the aggregated results were posted side-by-side for each company, participants gasped.

The Top 10 Trends in CSR for 2012. Success of Angry Birds reflects growth of young entrepreneurship in Finland. Finnish gaming companies are having a moment. 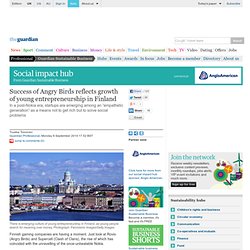 Just look at Rovio (Angry Birds) and Supercell (Clash of Clans), the rise of which has coincided with the unravelling of the once-unbeatable Nokia. This surge in successful start ups reflects an emerging culture of young entrepreneurship in Finland. Sauna, a co-working hub startup, and Slush, a startup conference now said to be the largest event of its kind in northern Europe, are new staples of the Finnish entrepreneurial scene. And thousands of young Finns are beginning to identify themselves as entrepreneurs. Finland is changing. Lack of ‘secure work’ in Finland My colleague Noritoshi Furuichi and I set out in May this year to seek some answers. Elina Uutela, 24, is a communication studies undergraduate at the University of Helsinki who works as a host at the Helsinki Think Company, a hub for academic entrepreneurship.

In the recession-hit 1990s, the situation was different. Meaning over money Young entrepeneurship in a Nordic welfare state. 20 most open, least corrupt companies in emerging markets. The Most Depressing Discovery About the Brain, Ever. Yale law school professor Dan Kahan’s new research paper is called “Motivated Numeracy and Enlightened Self-Government,” but for me a better title is the headline on science writer Chris Mooney’s piece about it in Grist: “Science Confirms: Politics Wrecks Your Ability to Do Math.” 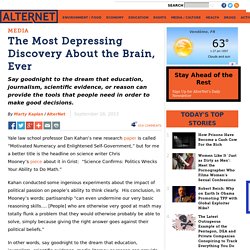 Kahan conducted some ingenious experiments about the impact of political passion on people’s ability to think clearly. His conclusion, in Mooney’s words: partisanship “can even undermine our very basic reasoning skills…. [People] who are otherwise very good at math may totally flunk a problem that they would otherwise probably be able to solve, simply because giving the right answer goes against their political beliefs.” In other words, say goodnight to the dream that education, journalism, scientific evidence, media literacy or reason can provide the tools and information that people need in order to make good decisions. It turns out that in the public realm, a lack of information isn’t the real problem. The Banality of Systemic Evil. We can be the generation … This amazing story of human progress shows what’s possible.We can be the generation that eradicates absolute poverty in our world. 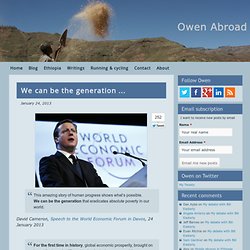 David Cameron, Speech to the World Economic Forum in Davos, 24 January 2013 For the first time in history, global economic prosperity, brought on by continuing scientific and technological progress and the self-reinforcing accumulation of wealth, has placed the world within reach of eliminating extreme poverty altogether. Jeff Sachs, Can Extreme Poverty Be Eliminated?

, Scientific American September 2005 You are right. Tony Blair, 16 April 2005, Campaign Diary But in this new century, millions of people in the world’s poorest countries remain imprisoned, enslaved, and in chains. Nelson Mandela, Trafalgar Square, February 2005 It’s an amazing thing to think that ours is the first generation in history that really can end extreme poverty, the kind that means a child dies for lack of food in its belly. The challenge is a huge one. Hunger is man’s oldest enemy.