South Pole sea ice is now vanishing at an alarming rate, too. Antarctic sea ice loss has suddenly sped ahead of the long-running decline in the Arctic. 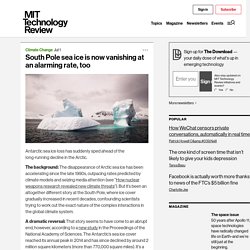 The background: The disappearance of Arctic sea ice has been accelerating since the late 1990s, outpacing rates predicted by climate models and seizing media attention (see “How nuclear weapons research revealed new climate threats”). But it’s been an altogether different story at the South Pole, where ice cover gradually increased in recent decades, confounding scientists trying to work out the exact nature of the complex interactions in the global climate system.

Planting more trees could suck up a huge share of carbon emissions. A new study found reforestation could be a far more important tool against climate change than previously believed. 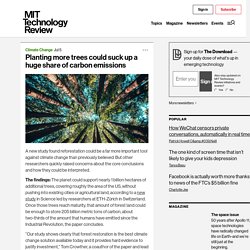 But other researchers quickly raised concerns about the core conclusions and how they could be interpreted. The findings: The planet could support nearly 1 billion hectares of additional trees, covering roughly the area of the US, without pushing into existing cities or agricultural land, according to a new study in Science led by researchers at ETH-Zürich in Switzerland. Once those trees reach maturity, that amount of forest land could be enough to store 205 billion metric tons of carbon, about two-thirds of the amount that humans have emitted since the Industrial Revolution, the paper concludes. 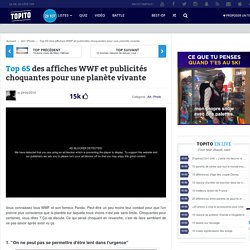 Yes, climate change made Harvey and Irma worse - CNN. It might seem premature when people in the Caribbean, Florida and Texas are still mucking out their flooded homes. 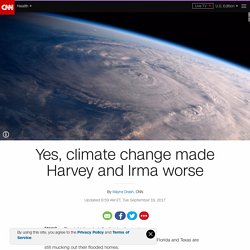 And no, changes in our planet's atmosphere did not cause Hurricanes Harvey or Irma. But the consensus among scientists is that the effects of climate change, such as rising sea levels and warmer oceans, made those storms far more destructive than they would have been in previous decades. Scientists say Miami could cease to exist in our children's lifetime.

Winds, fire, floods and quakes: A nutty run of nature. With four big hurricanes, a powerful earthquake and wildfires, it seems that nature recently has just gone nuts. 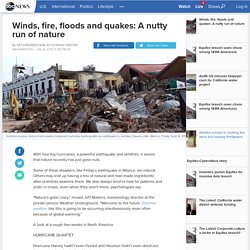 Some of these disasters, like Friday's earthquake in Mexico, are natural. Others may end up having a mix of natural and man-made ingredients after scientists examine them.

Des images et des actes. On climate change, it's all-out war. 'The carbon tax is only the first step along the path of sustainability.' Photo: Reuters The world continues to pour billions into fossil fuels. 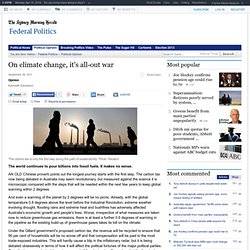 It makes no sense. British butterfly defies doom prediction to thrive in changing climate. A modest but resilient British butterfly has bucked the trend of worried predictions about the species' health, with scientists reporting it appears to have benefited rather than lost out from climate change. 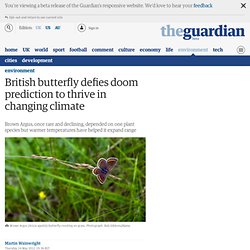 The Brown Argus, Aricia agestis, named after a 100-eyed giant in Greek mythology because of the multiple eye-like dots on its underwing, has long been dependent in the UK on a single plant species, the rockrose Helianthemum nummularium. Watch 131 Years of Global Warming in 26 Seconds. Don't Have Flash? 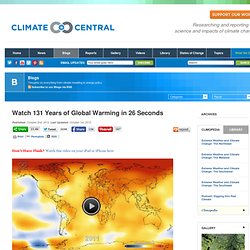 Watch this video on your iPad or iPhone here. Will Climate Change Make National Parks More Dangerous? Worst Flooding in Decades Swamps Thailand - Alan Taylor - In Focus. Heavy monsoon rains have been drenching Southeast Asia since mid-July, causing mudslides and widespread flooding along the Mekong River. Parts of Thailand are now experiencing the worst floods in half a century, as water inundates villages, historic temples, farms, and factories. At least 281 people have been killed in Thailand, and another 200 in neighboring Cambodia. Rescue workers are scrambling to prevent a humanitarian disaster, and Thailand's prime minister is warning businesses not to use the flooding as an excuse to raise prices. About 8.2 million people in 60 of Thailand's 77 provinces have been affected by the flooding, and economic losses are so far estimated to top $2 billion. Collected here are recent images of the crisis in Thailand as some 10 million residents in Bangkok keep a wary eye on the approaching surge of floodwater, due to reach the capital in a few days. [ 37 photos ] 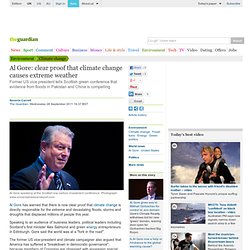 Photograph: www.universalnewsandsport.com Al Gore has warned that there is now clear proof that climate change is directly responsible for the extreme and devastating floods, storms and droughts that displaced millions of people this year.