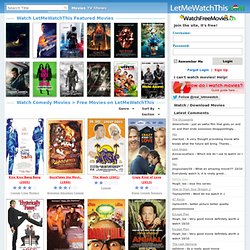 I can't watch movies! The Hollywood Issue - 14 Actors Acting - James Franco, Natalie Portman, Matt Damon and More. Year In Review: The 11 Best Short Films of 2011. Over the course of the year, curating the Short Film of the Day feature has given me a deep and affecting appreciation of the art form. 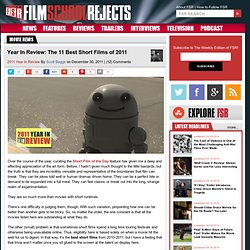 Before, I hadn’t given much thought to the little bastards, but the truth is that they are incredibly versatile and representative of the boundaries that film can break. They can be jokes told well or human dramas driven home. They can be a perfect bite or demand to be expanded into a full meal. Inception Explained - An interactive animated infographic. 25 Spectacular Movies You (Probably) Haven’t Seen.

Searching for inspiration for his incomplete novel, Owen begins taking strolls around the city at night where he discovers an unexpected group of people. I wish I could be more specific, but it would ruin the surprise. Know that it is brilliant, witty and full of mystique. 92% on Rotten Tomatoes (RT). Empire Features.