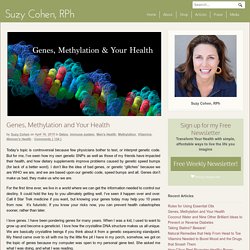 But for me, I’ve seen how my own genetic SNPs as well as those of my friends have impacted their health, and how dietary supplements improve problems caused by genetic speed bumps (for lack of a better word). I don’t like the idea of bad genes, or genetic “glitches” because we are WHO we are, and we are based upon our genetic code, speed bumps and all. Genes don’t make us bad, they make us who we are. For the first time ever, we live in a world where we can get the information needed to control our destiny. It could hold the key to you ultimately getting well. I love genes. I showed her my homozygous MTHFR gene mutation (for methylation) and then playfully said, “I don’t drink much alcohol because I have this methylation SNP and don’t want to end up dancing naked on the table!” 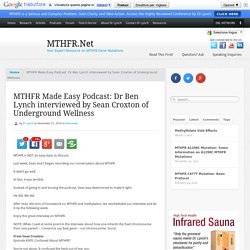 Last week, Sean and I began recording our conversation about MTHFR. It didn’t go well. In fact, it was terrible. Instead of giving in and tossing the podcast, Sean was determined to make it right. He did. After Sean did tons of homework on MTHFR and methylation, we rescheduled our interview and let it rip the following week. Enjoy this great interview on MTHFR.

NOTE: When I said at some point in the interview about how one inherits the ‘bad chromosome from one parent’ – I meant to say ‘bad gene’ – not chromosome. From Sean Croxton: Episode #305: Confused About MTHFR? You’re not alone. But this past week I spent a ton of time studying the ins and outs of the MTHFR pathway to prepare for my podcast with Dr. Undermethylation vs. Overmethylation: Causes, Symptoms, Treatments. While there are a number of potential factors that may cause mental illness, one that many people don’t consider is that of methylation. 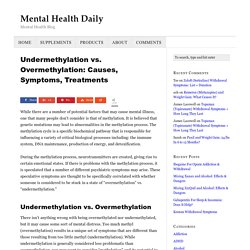 It is believed that genetic mutations may lead to abnormalities in the methylation process. The methylation cycle is a specific biochemical pathway that is responsible for influencing a variety of critical biological processes including: the immune system, DNA maintenance, production of energy, and detoxification. During the methylation process, neurotransmitters are created, giving rise to certain emotional states. Metabolic Gateways: CBS Gene Mutations & Glutathione - Metabolic Healing. It is important to address that the information regarding CBS pathway activity is still very new, and not everything is well known or understood with regards to what is actually taking place in individuals with said gene mutations, biochemically speaking. 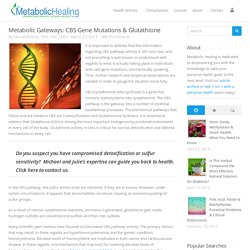 Time, further research and empirical observations are needed in order to gauge the situation more fully. CBS (cystathionine beta synthase) is a gene that converts homocysteine into cystathionine. The CBS pathway is the gateway into a number of essential biochemical processes. The biochemical pathways that follow and are linked to CBS are Transsulfuration and Glutathionine Synthesis. It is essential to address that Glutathione (GSH) is among the most important endogenously-produced antioxidants in every cell of the body.

Do you suspect you have compromised detoxification or sulfur sensitivity? In the CBS pathway, the sulfur amino acids are removed, if they are in excess. Clinical Observations Regarding CBS Up-Regulations. Histadelia (Histamine High) Histadelia. Under-methylation/HISTADELIA Individuals with high-histamine levels may be due to a metabolic imbalance that results from under-methylation. 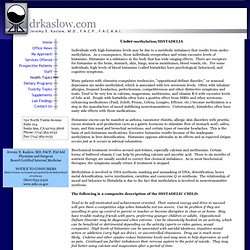 As a consequence, these individuals overproduce and retain excessive levels of histamine. Histamine is a substance in the body that has wide ranging effects. There are receptors for histamine in the brain, stomach, skin, lungs, mucus membranes, blood vessels, etc. For some individuals, high levels of blood histamine (called histadelia) have psychological, behavioral, and cognitive symptoms. Many patients with obsessive-compulsive tendencies, "oppositional-defiant disorder," or seasonal depression are under-methylated, which is associated with low serotonin levels. 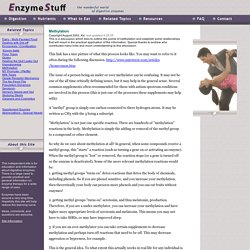 Kd. last updated 8.25.05 This is a discussion which tries to outline the points of methylation and establish some relationships that will result in the practical application of the information. Special thanks to andrew who contributed many links and much understanding to this discussion. This link has a nice picture of what this process looks like. Chapter 6: Step Two, Part One. Optimizing the Methylation Cycle Once you get the test results, you will most likely wish to move ahead with this program. 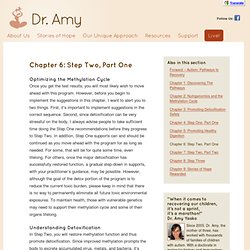 However, before you begin to implement the suggestions in this chapter, I want to alert you to two things. First, it’s important to implement suggestions in the correct sequence. Second, since detoxification can be very stressful on the body, I always advise people to take sufficient time doing the Step One recommendations before they progress to Step Two. In addition, Step One supports can and should be continued as you move ahead with the program for as long as needed.

Understanding Detoxification In Step Two, you will restore methylation function and thus promote detoxification. To understand the distinction, picture a revolving door (the kind you might see in an office building or hotel.) When you use a chelating agent, it’s like taking some of the accumulated toxins out through a side door of the building—but the revolving door remains impaired. 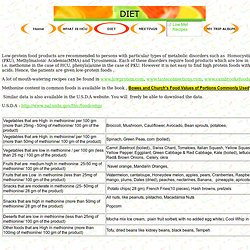