Grandma's One-Pot Slow Cooked Boiled Dinner - Page 2 of 2 - Recipe Patch. There is nothing better than walking into the house after working all day to the amazing aroma of this boiled dinner. 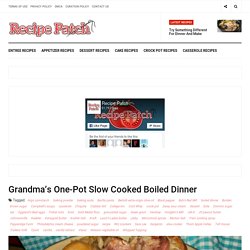 I know whenever the smell hits my nose, my stomach starts growling! On those cold winter evenings it really takes me back to when I lived with my parents and I would come in from playing to this same exact smell. I didn’t appreciate it as much then as I do now…but I’m glad I can make it for my family. Check out what they are saying about this recipe over at Just A Pinch: “This is one of my favorite slow cooked, one-pot dinners. 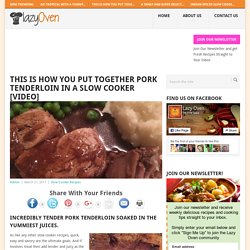 As like any other slow cooker recipes, quick, easy and savory are the ultimate goals. And if involves meat then add tender and juicy as the other top priorities. This recipe is exactly all those things in one. Pork tenderloin is actually tender meat as it is already but, how you cook it can make a big difference to the outcome of the dish. Comforting Chicken & Noodles Crock Pot – Easy Recipes. Ingredients : 1 24 ounce package – frozen egg noodles 2 – 14.7 oz cans – cream of chicken soup – sometimes i use 1 can chicken and 1 can cream of celery 1 stick (1/2) cup butter – cut into pieces 1 – 32 oz chicken broth – may want extra to thin out, if too thick. the frozen noodles thicken the broth mixed vegetables – optional – i didn’t use this time Chicken buillon to taste – optional – i add about a teaspoon of better than buillion chicken flavored paste – for a richer chicken flavor 6 small boneless, skinless chicken breasts or 4 large salt & pepper to taste – can add some parsley too if desire How to make it : Salt & pepper chicken breasts and place in the bottom of crock pot. 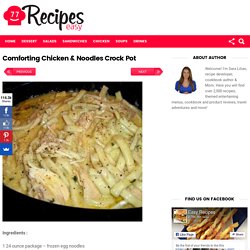 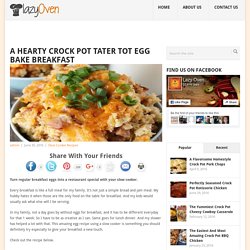 Every breakfast is like a full meal for my family. It’s not just a simple bread and jam meal. My hubby hates it when those are the only food on the table for breakfast. And my kids would usually ask what else will I be serving. In my family, not a day goes by without eggs for breakfast, and it has to be different everyday for that 1 week.

Check out the recipe below. How to make southern scalloped potatoes with ham. Noreen Lambert for Cooktop Cove Like the Slow Cooker Potatoes Facebook page. 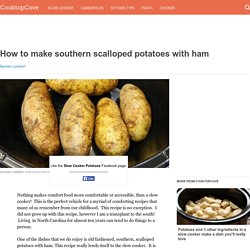 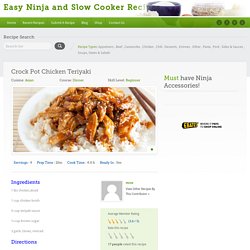 Tips for converting regular recipes for the slow cooker. Kraft / Stockpiling Moms The slow cooker truly may be the greatest invention since sliced bread. 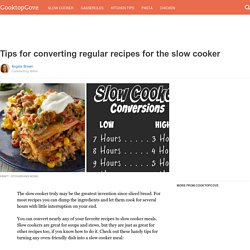 For most recipes you can dump the ingredients and let them cook for several hours with little interruption on your end. You can convert nearly any of your favorite recipes to slow cooker meals. Slow cookers are great for soups and stews, but they are just as great for other recipes too, if you know how to do it. Check out these handy tips for turning any oven-friendly dish into a slow cooker meal: Meat Matters:Meats with a lot of fat and tissue do well in the slow cooker because they break down slower, according to Bonappetit. How to make spaghetti in a slow cooker. Plus Size Clothing for Women. How to make banana cake in a slow cooker. Slow cookers have become indispensable in the kitchen, allowing you to come home after a busy day to a heavenly aroma and perfectly cooked meal. 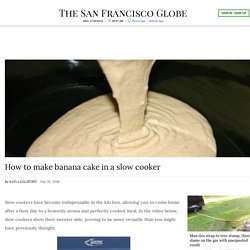 In the video below, slow cookers show their sweeter side, proving to be more versatile than you might have previously thought. Chrissie — a self-described "slightly older mum of one who drinks far too much red wine [and] is obsessed with slow cooking" -- is the brains behind the blog Mediocre Mum. 5 Potato Recipes for the Slow Cooker. 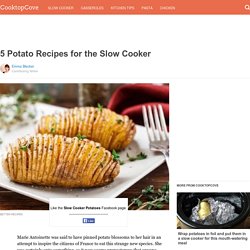 Marie Antoinette was said to have pinned potato blossoms to her hair in an attempt to inspire the citizens of France to eat this strange new species. She was certainly onto something, as it now seems preposterous that anyone might have ever needed convincing to eat one of the most delicious and varietal vegetables out there. Potatoes are the ultimate ingredient when it comes to cooking meals that are both low-cost and high-comfort. Potatoes can serve as a fantastic side dish to your favorite protein, or provide you with a hearty feast all on their own. How to make potato soup in a slow cooker. 10 Chicken Recipes for the Slow Cooker. Cooktop Cove It’s no secret that chicken is one of the most versatile ingredients out there. 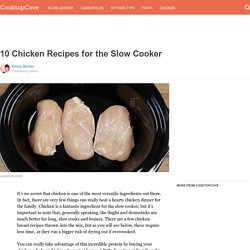 In fact, there are very few things can really beat a hearty chicken dinner for the family. Chicken is a fantastic ingredient for the slow cooker; but it’s important to note that, generally speaking, the thighs and drumsticks are much better for long, slow cooks and braises. There are a few chicken breast recipes thrown into the mix, but as you will see below, these require less time, as they run a bigger risk of drying out if overcooked. A Flavorsome Homestyle Crock Pot Pork Chops - Page 2 of 2 - Lazy Oven. Enjoy this slow cooker balsamic chicken recipe.

How to make southern scalloped potatoes with ham. Noreen Lambert for Cooktop Cove Like the Slow Cooker Potatoes Facebook page. Nothing makes comfort food more comfortable or accessible, than a slow cooker! This is the perfect vehicle for a myriad of comforting recipes that many of us remember from our childhood.

This recipe is no exception. I did not grow up with this recipe, however I am a transplant to the south! One of the dishes that we do enjoy is old fashioned, southern, scalloped potatoes with ham. When I made this dish and my teenage girls returned home from school, they said the kitchen smelled like the church potluck on a Sunday afternoon. Ingredients 2 pounds russet potatoes, scrubbed well and sliced thin1 large sweet onion, peeled and sliced thin1 pound (2 cups), boneless ham steak cubed (leftover ham is great too)2 cups shredded sharp cheddar cheese (more for the top at the end if desired)1, 12 ounce can evaporated milk1 cup heavy cream or half and halfSaltCracked black pepperpaprika (optional)

Apparently my family was so hungry from smelling what I cooked tonight that they forgot I needed to take a picture before they dove into the pork so you are getting a picture of a half eaten Balsamic Glazed Pork Tenderloins recipe. LOL. Slow Cooker Balsamic Glazed Pork Tenderloins 2 pork tenderloins (I used the Hormel Always Tender tenderloins) 3 cloves of garlic (pressed) 1 cup of water 2 tsps of sage ½ cup of brown sugar 1 tsp of salt ½ tsp of ground black pepper ¼ cup of balsalmic vinegar 2 tbsp of soy sauce 1 tbsp of corn starch 1 Reynolds slow cooker liner. Slow Cooker Garlic Roasted Baby Potatoes Recipe, Whats Cooking America. My daughter’s and I were so excited to receive our foodie friend’s new cookbook, Recipes For Busy Moms - The Magical Slow Cooker by Sarah Olson.

My youngest daughter became friends with Sarah through Facebook and we all recently met for the first time at the International Food Bloggers Conference in Seattle this past fall. Sarah is a gracious lady and gifted cook. As conference alumni, she showed us the ropes and we had the best time tasting all the wonderful food samples! Slow Cooker Baby Back Ribs. I love pork ribs no matter how you make them. Smoked from my favorite BBQ joint, baked in the oven and fall off the bone, full out grilled from start to finish or started in the oven and finished on the grill. Hang around long enough and I'll probably do a pressure cooked rib here soon, which is pretty much steaming, and a lot like boiling, which kinda makes some of y'all crazy when that word boiled is associated with a rib of any kind.

Oh yeah, I've boiled them too! And wait, if that's not shocking enough, are y'all sitting down? Because, I've actually even smoked some here recently y'all... although in all fairness to my expert Q'er friends, that's still considered fauxQ, because I did it with an electric smoker, which, frankly is very likely the only smoking you're ever gonna see outta me. It was my first ever run on smoking anything, well, other than using a smoker box on the gas grill, and, of course, I had no idea what I was doing. Here's how to make them. ☛ Are you on Facebook? Slow Cooker Cashew Chicken. Aunt Bee's Recipes: Slow Cooker Beef and Shallot Stroganoff. I am a huge fan of using the crock pot but I am super picky about what foods I like cooked in it. Slow Cooker Smothered Pork Chops Recipe.

Slow-Cooker Twenty-Garlic Chicken Dinner recipe from Pillsbury.com. Slow-Cooker Barbecue Ribs recipe from Pillsbury.com. Slow Cooker Steak Burritos - The Magical Slow CookerThe Magical Slow Cooker. This recipe for slow cooker steak burritos is actually a family recipe, but originally made on the stove top, not the slow cooker. My ethnicity is Native American Indian (and Hawaiian), but the foods I grew up on were mostly american, or hispanic.

Family friends who are from the same indian tribe as my family would visit our family often, and make homemade tortillas, and what we called Chile meat. My mom, Bea, and I would make tortillas all day, about a hundred of them (there was only 6 of us to eat them!) Crock Pot Apple Kielbasa Bites. We spent the day in San Francisco yesterday; took the kids to the aquarium, Pier 39, and Fisherman’s Wharf. Ate. Slow Cooked Triple Cheddar Mac & Cheese. When it comes to slow cooking macaroni and cheese, there are literally 1000's of recipes. They're all so similar, I couldn't begin to discuss every single method. So, I would like to show you how I make mine...yes? The Magical Slow CookerThe Magical Slow Cooker. Creamy Crock Pot Hot Chocolate.

Creamy Crock Pot Hot Chocolate recipe that is to die for! This easy hot cocoa will warm you up on those cozy, cold winter days and is a great hot drink to serve for Christmas. Roasted Garlic Chicken Puffs. Here’s one recipe which is famous in Spain. You can actually find these little bundles in bakeries and bars. Bacon Wrapped BBQ Meatloaf. This is my favorite meatloaf recipe: Barbeque Meatloaf wrapped in bacon. The flavor is outstanding and this is the best meatloaf recipe I have ever tried. It’s so easy and you won’t make it any other way after tasting this BBQ meatloaf!