Mining Firm Plans to Destroy Indigenous Australian Sites, Despite Outcry. MELBOURNE, Australia — A giant mining company on Thursday said it would go ahead with destroying at least 40 ancient Indigenous sites in the Pilbara desert in Western Australia, just days after a national outcry over revelations that other archaeological sites in the region had been razed. 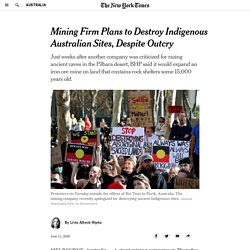 The company, BHP, received approval to destroy the sites in May after it applied to expand an iron ore mine, worth $3.2 billion, on land that contains rock shelters some 15,000 years old. But in a moment of global upheaval around race and inequality, BHP’s plan has stoked outrage and criticism in Australia. 69 Times Australians Confused The Rest Of The World With Our Slang. Photos Of Australia Before And After The Coronavirus Outbreak. The 13 best walks in Sydney. How far? 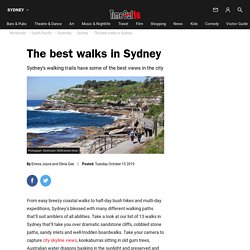 65km How long will it take? Two-five days, depending on your speed and endurance. Why go? Have you ever been driving to the foothills of the Blue Mountains and thought “hey, I’d love to hike this trip”? What's to see? Should you pack snacks? The best meals in Sydney under $15. Official Sydney Tourism Website. Manchester Museum to return artefacts to Indigenous Australians. Manchester Museum is returning a number of sacred artefacts to Indigenous Australians, nearly a century after the items came into its possession. 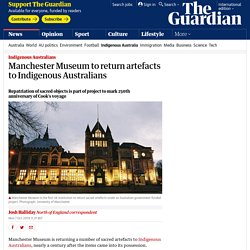 The repatriation of 43 ceremonial objects is the first of its kind from the UK under a project to mark the 250th anniversary next year of Captain James Cook’s first voyage to Australia. The artefacts range from traditional body ornaments and slippers to a churinga, a wood or stone item believed to embody the spiritual double of a relative or ancestor, and clapsticks, a musical instrument used in Aboriginal ceremonies. The first artefacts will be repatriated in a formal ceremony in November to communities including the Aranda people and the Gangalidda Garawa, whose cultural heritage is said to date back more than 70,000 years.

Mangubadijarri Yanner, a spokesman for the Gangalidda Garawa Native Title Aboriginal Corporation, said the handover was a “fundamental part of the healing and reconciliation process”. Numbers tell devastating story in latest Aboriginal youth suicide inquest. The youngest of the 13 people whose deaths formed the basis for the most recent coronial inquiry into Aboriginal youth suicides in Western Australia was just 10 years old when she took her life on 6 March 2016. 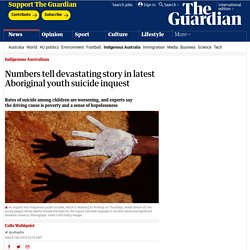 They were born between 1991 and 2006, in communities around the Kimberley region of Western Australia and in the Northern Territory. They died between 20 November 2012 and 24 March 2016 at Halls Creek, Kununurra, Broome, Wyndham and in smaller remote Aboriginal communities in between. L’Australie reconnaît Jérusalem-Ouest comme capitale d’Israël. Five Films from Cannes 2018 We Can't Wait to See in Australia - Concrete Playground. Ten Must-See Films at the 2018 Sydney Film Festival - Concrete Playground.

Two-up. Painting of 2-up game. 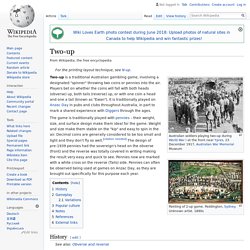 Paddington, Sydney. Unknown artist. 1890s History[edit] The exact origins of two-up are obscure, but it seems to have evolved from pitch and toss, a gambling game involving tossing a single coin into the air and wagering on the result. The 10 Most Aussie Sayings Ever. The Australian version of the English language is a rich tapestry, full of colourful words and phrases which have obvious meanings to the locals, but are basically incomprehensible to anyone else. 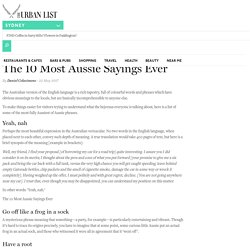 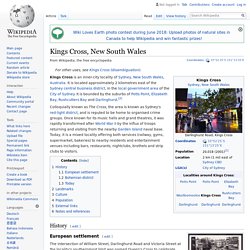 It is located approximately 2 kilometres east of the Sydney central business district, in the local government area of the City of Sydney. It is bounded by the suburbs of Potts Point, Elizabeth Bay, Rushcutters Bay and Darlinghurst.[2] Colloquially known as The Cross, the area is known as Sydney's red-light district, and is reputed to be home to organised crime groups. Once known for its music halls and grand theatres, it was rapidly transformed after World War II by the influx of troops returning and visiting from the nearby Garden Island naval base. History[edit] Snugglepot and Cuddlepie. Snugglepot and Cuddlepie is a series of books written by Australian author May Gibbs. 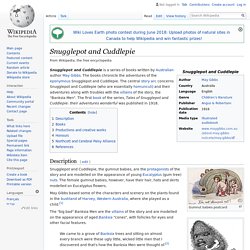 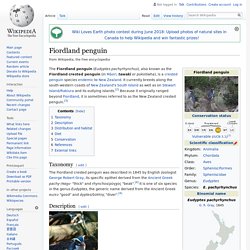 It currently breeds along the south-western coasts of New Zealand's South Island as well as on Stewart Island/Rakiura and its outlying islands.[2] Because it originally ranged beyond Fiordland, it is sometimes referred to as the New Zealand crested penguin.[3] Taxonomy[edit] The Fiordland crested penguin was described in 1845 by English zoologist George Robert Gray, its specific epithet derived from the Ancient Greek pachy-/παχυ- "thick" and rhynchos/ρύγχος "beak".[4] It is one of six species in the genus Eudyptes, the generic name derived from the Ancient Greek eu/ευ "good" and dyptes/δύπτης "diver".[4] Description[edit] Distribution and habitat[edit] This penguin nests in colonies among tree roots and rocks in dense temperate coastal forest. 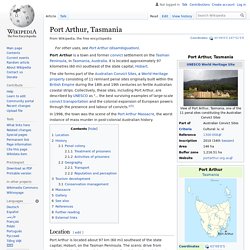 Port Arthur is one of Australia's most significant heritage areas and an open-air museum. Location[edit] Port Arthur is located approximately 97 kilometres (60 mi) south east of the state capital, Hobart, on the Tasman Peninsula. Port Stephens (New South Wales) The Karuah River drains into Port Stephens at its north-western corner. The Myall River (through the Myall Lakes) drains into the port on its northern shore, about 5.7 km (3.5 mi) from the mouth of the port. Twelve Mile Creek drains into the port's south-western corner. The town of Karuah, located at the north-western corner of the port near the mouth of the Karuah River, experiences similar geographical separation from the Tilligerry Peninsula. Despite being only 7.7 km (4.8 mi) from Tanilba Bay, the road distance between the two suburbs is 40 km (25 mi). Entrance of Karuah River into Port Stephens (seen from Tanilba Bay, approximately 7.7 km (4.8 mi) away) A number of small towns developed around the port as fishing, holiday and retirement communities.

Gardenia taitensis. Gardenia taitensis,[2] also called Tahitian gardenia or Tiaré flower, is a species of plant in the Rubiaceae family. It is an evergreen tropical shrub that grows to 4 m tall and has glossy dark green leaves (5–16 cm long) that are oppositely arranged along the stem. The flower is creamy white and pinwheel-shaped with 5–9 lobes (each lobe 2–4 cm long) and fragrant. Native to the highland shores of the South Pacific, it has the distinction of being one of the few cultivated plants native to Polynesia. It is the national flower of French Polynesia and the Cook Islands.

The name Tahitian gardenia is somewhat a misnomer because it is neither native nor naturalised in Tahiti. The plant originates from Melanesia and Western Polynesia. Plumeria. Plumeria (/pluːˈmɛriə/) is a genus of flowering plants in the dogbane family, Apocynaceae.[1] Most species are deciduous shrubs or small trees. The species variously are indigenous to Mexico, Central America, and the Caribbean, and as far south as Brazil, but are grown as cosmopolitan ornamentals in warm regions.[2][3] Common names for plants in the genus vary widely according to region, variety, and whim, but frangipani or variations on that theme are the most common.

Plumeria also is used directly as a common name, especially in horticultural circles.[4] Description[edit] Plumeria flowers are most fragrant at night in order to lure sphinx moths to pollinate them. The flowers yield no nectar, however, and simply trick their pollinators. Plumeria species may be propagated easily by cutting leafless stem tips in spring. There are more than 300 named varieties of Plumeria. Death in the sun: Australia's 88-day law leaves backpackers exploited and exposed. Martin Hand knew something was wrong as he watched a fellow backpacker stagger down the road in the searing heat of a Queensland summer. Hand, a British traveller, had been picking pumpkins on a farm near Ayr, a small country town 10km (6 miles) from the coast, along with other young backpackers including a 27-year-old Belgian, Olivier “Max” Caramin. The day was hot – the temperature had reached 35C – and the field where they were working was in a bowl; very humid with no breeze.

Nor was there any shade on the trailer that was used to take the boxes of picked pumpkins to the shed. “It was really hard to cool down,” Hand says. “We told [Max] to get into the shade of the trailer, but then I seen Max run past me. “I said what the fuck’s going on? Caramin got 50 to 80 metres up the road before he collapsed. ACTIVEWEAR. Places to go. Little Book of Sydney Villages Like all great world capitals, Sydney is a collection of villages, each with its own unique atmosphere and local characteristics, whether it’s the design culture of Surry Hills, Newtown’s indie scene or Paddington’s elegant style. The best way to discover the array of possibilities in these villages is to explore them for yourself. This collection of classic Sydney experiences will immerse you in village life, wherever you are in this wonderful, multifaceted city: Retour de l'étranger : conseils si tu ne veux pas rentrer.

The-internship-industry-why-young-people-are-now-paying-to-work-20180315-p4z4kw. Why I Love the Managed Risk, and Rewards, of Nippers. Edward (Ned) Kelly. Edward (Ned) Kelly (1855-1880), bushranger, was born in June 1855 at Beveridge, Victoria, the eldest son of John (Red) Kelly and his wife Ellen, née Quinn. His father was born in Tipperary, Ireland, in 1820 and sentenced in 1841 to seven years' transportation for stealing two pigs. He arrived in Van Diemen's Land in 1842. When his sentence expired in 1848 he went to the Port Phillip District, where on 18 November 1850 he married Ellen, the eighteen-year-old daughter of James and Mary Quinn; they had five daughters and three sons.

ABC News - With the number of older Australians set to... Triple j. Why are white people on Sunrise with no experience calling for Indigenous child removals? This morning, I woke to the continuation of a national debate about the need to place Indigenous children with white families because of sexual abuse. Man-blows-up-mount-isa-home-after-using-fly-spray-as-a-flame-thrower-20180308-p4z3ih. Australian Aboriginal Flag. Marching from Parliament House down King William Street to Victoria Square, Adelaide, to celebrate the 30th anniversary of the Aboriginal Flag, 8 July 2001. Touch (sport) Rugby league.