The Map is not the territory

This is the Most Detailed Map to Date of Our Place in the Universe. The world’s languages, in 7 maps and charts. These seven maps and charts, visualized by The Washington Post, will help you understand how diverse other parts of the world are in terms of languages. 1. 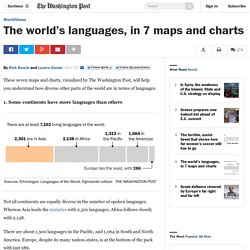 Some continents have more languages than others. The Island of Knowledge: How to Live with Mystery in a Culture Obsessed with ... By Maria Popova. 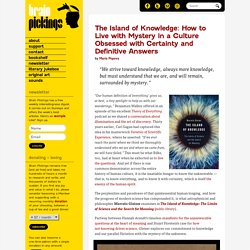 Our Favorite Maps of 2013. The digital maps we loved in 2013 didn't simply illustrate novel or useful information (how people travel, where they live, what it means to live without much money). 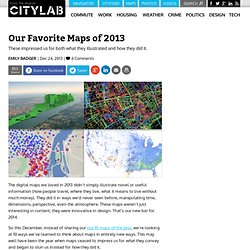 They did it in ways we'd never seen before, manipulating time, dimensions, perspective, even the atmosphere. These maps weren't just interesting in content; they were innovative in design. That's our new bar for 2014. Mapping the World's Problems. SAN FRANCISCO — Nearly a decade ago, an environmental group in Brazil grew concerned that government data and maps about Amazon deforestation were out of date and hard to view. 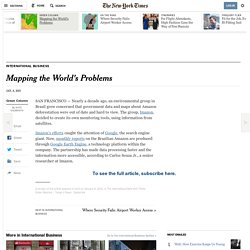 HarperCollins omits Israel from school atlas. HarperCollins, one of the world's largest publishing houses, sells English-language atlases to schools in the Middle East that omit Israel. 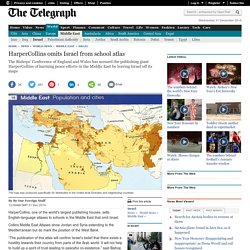 Collins Middle East Atlases show Jordan and Syria extending to the Mediterranean but do mark the position of the West Bank. “The publication of this atlas will confirm Israel’s belief that there exists a hostility towards their country from parts of the Arab world. It will not help to build up a spirit of trust leading to peaceful co-existence,” said Bishop Declan Lang, the chairman of the Bishops' Conference Department of International Affairs, to The Tablet. “Maps can be a very powerful tool in terms of de-legitimising 'the other' and can lead to confusion rather than clarity. We would be keen to see relevant bodies ensure that all atlases anywhere reflect the official United Nations position on nations, boundaries and all political features," added Dr Jane Clements, director of the Council of Christians and Jews. New data-visualisations: The quick and the dead.

How digital maps are changing the way we understand our world. The way we use maps is changing. 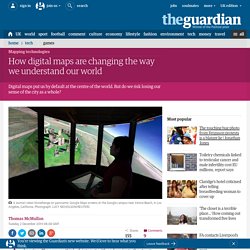 The way we think of the city is changing. The way we think of, interact with and navigate the streets, alleys, boulevards, roads, parks, lanes, hills, cracks and gutters is going through a seismic shift, not because the landscape has changed, but because of little black rectangles in our pockets. Apps such as Google Maps and Citymapper “smooth out the machine,” says Mike Duggan, researcher in Cultural Geography at Royal Holloway. Duggan has been researching how digital technologies change our experiences of everyday places, and one of the main things he’s noticed is the way new technology continues to smooth out the machine that billions of us navigate every day – the city.

“There’s a long history in ‘smoothing out the city’ via technology,” says Duggan. Having a map in your pocket at all is relatively recent development. “You are here” no longer needs to be said. But is this sense of ownership illusory? So it’s only natural to expect a reaction. Maps of London's bus journeys. Photo by Dan Kitwood/Getty Images This article originally appeared in Business Insider. 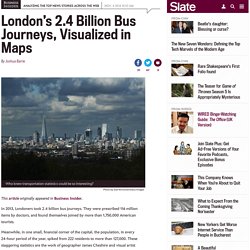 In 2013, Londoners took 2.4 billion bus journeys. They were prescribed 116 million items by doctors, and found themselves joined by more than 1,750,000 American tourists. 15 Maps That Don't Explain the Middle East at All. The Atlantic/Nick Danforth Violent upheaval in the Middle East has recently spawned all manner of maps purporting to explain how the region got this way. 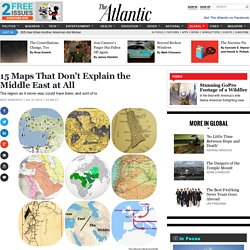 Here, instead, are 15 maps that don’t claim as much. Or rather, they do not seek, like many other maps, to capture some fixed set of core facts about the region. Instead, these maps provide a more fluid perspective on the Middle East, often by showing what didn’t happen as opposed to what did. But for all these maps don’t show, they do illustrate one thing: the sobering fact that no one map—or even set of maps—can ever explain the region’s complex history and politics. 1.

Rudyard Kipling once wrote that “East is East, and West is West, and never the twain shall meet.” 2. At a time when the Crusades still serve as the historical starting point for many discussions of the modern Middle East, this map offers perspective on how these messy medieval wars became a go-to metaphor for Christian-Muslim conflict. 3. 4. 5. 6. 7. 8. 10. 11. Mullered and 61 other words for beaten at sport. 23 June 2014Last updated at 20:25 ET Defeat is a word sport fans are all too familiar with. 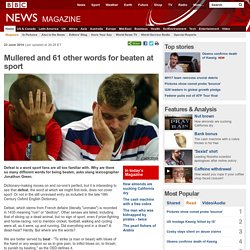 Why are there so many different words for being beaten, asks slang lexicographer Jonathon Green. Dictionary-making moves on and no-one's perfect, but it is interesting to see that defeat, the word at which we might first look, does not cover sport. Or not in the still unrevised entry as included in the late 19th Century Oxford English Dictionary. Defeat, which stems from French defaire (literally "unmake") is recorded in 1435 meaning "ruin" or "destroy". Counterterrorism and the English Language- verbal maps. The New York Times is finally calling torture by its name. 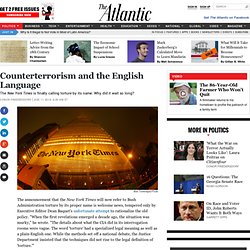 This map will change how you see the world. A new map has the power to completely change how we view the world. From the Gall-Peters’ projection that made us question Mercator’s previously-dominant version, to WorldMapper’s beautiful data representations. Equally, the map above stirs up the imagination to make us ponder how the world would look if countries with the biggest populations were matched with a corresponding land area.

JPalmz, the amateur cartographer who created the map, explained to i100: “All of the data is publicity available on Wikipedia, I just wanted to make it more visually presentable. “It’s been mentioned in some newspapers in Germany and a television show in Japan. Can you believe that? Science Graphic of the Week: NOAA's Highest-Res Weather Forecast Yet Is Also ... This image, made with NOAA’s newest weather model, shows ground temperature readings at a 2 mile resolution. Each pixel is shaded according to the temperature, ranging from 113 degrees F (the brightest yellow) to freezing (white). This colorful map of ground temperature shows the tapestry of American weather on September 30.

Undeniably beautiful, it owes its rich color gradient to a powerful new scientific tool for modeling the weather for incredibly small chunks of both time and space.