The world’s languages, in 7 maps and charts 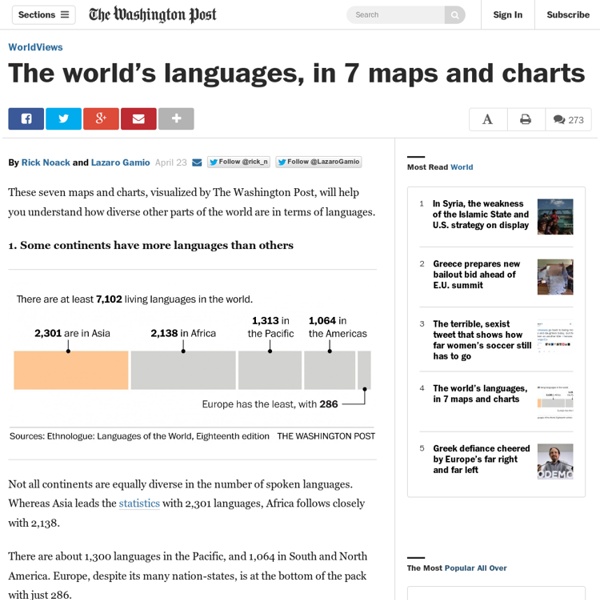 These seven maps and charts, visualized by The Washington Post, will help you understand how diverse other parts of the world are in terms of languages. 1. Some continents have more languages than others Not all continents are equally diverse in the number of spoken languages. Whereas Asia leads the statistics with 2,301 languages, Africa follows closely with 2,138. There are about 1,300 languages in the Pacific, and 1,064 in South and North America. 2. Chinese has more native speakers than any other language, followed by Hindi and Urdu, which have the same linguistic origins in northern India. The numbers are fascinating because they reflect the fact that two-thirds of the world's population share only 12 native languages. His numbers are surprising, compared with the ones featured in the CIA's Factbook. The number for Portuguese is smaller than other sources suggest because not all Brazilians are native speakers. 3. 4. 5. 6. 7. Some language skills could be more rewarding than others.

English Timeline This interactive timeline allows you to explore the evolution of English language and literature, from the 11th century to the present day. Scroll through decade by decade to investigate the richness and diversity of our poetry and prose, as well as the many social, cultural and political strands from which our language has been woven. The timeline includes a fascinating combination of texts: Anglo Saxon tales and medieval illuminations; iconic literary manuscripts and printed texts; as well as letters, newspapers, handbills, posters, charters, speeches and campaign leaflets. Launch the interactive Flash timeline above, or explore the collections within each of the centuries below. Beowulf, Anglo Saxon monsters & more... The beginnings of Middle English & more...

Why we shouldn’t judge a country by its GDP Analysts, reporters and big thinkers love to talk about Gross Domestic Product. Put simply, GDP, which tallies the value of all the goods and services produced by a country each year, has become the yardstick by which we measure a country’s success. But there’s a big, elephant-like problem with that: GDP only accounts for a country’s economic performance, not the happiness or well-being of its citizens. Map of Pangea With Current International Borders 56.1K 2935Share51 View larger The good people at Open Culture recently shared this map of Pangea with the present day country names.

Top 10 Family Days Out 8. Wrest Park, Bedfordshire Clearly one of Wrest Park's most appealing attributes is the sheer amount of space it affords families to run around, explore, discover and just simply have a bit of fun in. With over 90 acres of historic landscape surrounding the mansion, children could spend days here and never get bored! Facebook status updates reveal low self-esteem and narcissism People who post Facebook status updates about their romantic partner are more likely to have low self-esteem, while those who brag about diets, exercise, and accomplishments are typically narcissists, according to new research. Psychologists at Brunel University London surveyed Facebook users to examine the personality traits and motives that influence the topics they choose to write about in their status updates — something that few previous studies have explored. The data was collected from 555 Facebook users who completed online surveys measuring the ‘Big Five’ personality traits — extroversion, neuroticism, openness, agreeableness and conscientiousness — as well as self-esteem and narcissism. The research found: People with low self-esteem more frequently posted status updates about their current romantic partner.Narcissists more frequently updated about their achievements, which was motivated by their need for attention and validation from the Facebook community.

The Stolen Generations One of three posters produced by Batchelor Press/Batchelor Institute to commemorate the day Australian Prime Minister Kevin Rudd apologised to the stolen generation (February, 13, 2008). On May 26th, each year since 1998, people in Australia come together for National Sorry Day events, and on February 13th to commemorate the National Apology to the Stolen Generations of Indigenous Australians given by Prime Minister Kevin Rudd on behalf of the government and the nation. This is part two in a series of articles examining national apologies to those who suffered egregious wrongs, pain, suffering and death at the hands of governments and people, and an examination of national efforts towards reconciliation and the righting of wrongs. Last Sunday I examined the recent apology speech by Australian PM Julia Gillard. I was, and am, moved by the righting of wrongs inflicted on minority populations or the powerless by those in power. I am still waiting.

Oxford University Transcript Oxford should be about an hour's drive from London. It’s very popular with tourists and students. The Web Is Not a Post-Racial Utopia Rust, a 2013 indie survival game from Facepunch Studios, plays like a cross between Minecraft and Grand Theft Auto. Players find themselves “born” into a mysterious wilderness, naked and alone, forced to forage for resources and to craft clothing, supplies and shelter for themselves. They must contend with starvation, hypothermia and animal attacks, but by far the most dangerous threat comes from other players who roam the island. When the game was first opened up, all players were given the same default avatar: a bald white man. With the most recent update, Rust’s lead developer, Garry Newman, introduced different avatars of different racial origins into the mix. However, they did so with a twist — unlike typical massively multiplayer online role-playing games, Rust does not allow players to choose the race of their avatar.

Informed Teachers: Halloween Ready for Halloween ? Off we go ! Where do baby ghosts go during the day ? When is it bad luck to meet a black cat ?