Saving the Bees. The Chinese Town That Turns Your Old Christmas Tree Lights Into Slippers - Adam Minter. Every year, 20 million pounds of the discarded holiday lights make their way to Shijiao Factory workers stand over bundles of Christmas tree lights to be recycled / Adam Minter SHIJIAO, China -- A single strand of burnt-out Christmas lights weighs almost nothing in the hand. 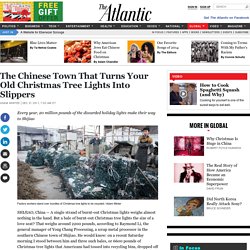 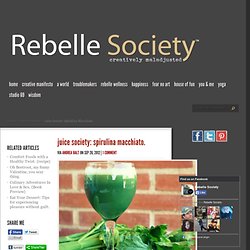 Are you tired of swimming, and sometimes drowning in your daily cup(s) of Joe? Could your adrenals be mad at you for constantly overworking them with incredible amounts of caffeine? Could your liver secretly be asking you for a well-deserved detox break? If so, lean closer, I’ve got the greenest secret. And I promise you, it is not as creepy as it looks. This quick detox, Spirulina Machiatto will clean your insides, hydrate your heart and clear your mind, after a high of morning energy. It’s a gentler, soothing, subtler, longer-lasting and more grounded energy. Don’t worry, you don’t have to quit coffee, but you can alternate it with energetic and detoxifying green sips here and there. Les Ingredients (serves two—in wine glasses): Organic is always preferable. Colorado Clean Energy Cluster. 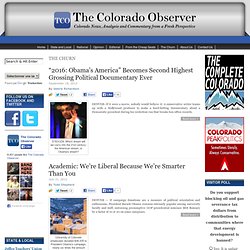 DENVER–If it were a movie, nobody would believe it: A conservative writer teams up with a Hollywood producer to make a hard-hitting documentary about a Democratic president during his reelection run that breaks box-office records. Read more » Academic: We’re Liberal Because We’re Smarter Than You University of Colorado employees donated $38,335 to President Obama’s campaign, nearly six times the amount they gave Romney (Michael Buck Image) DENVER — If campaign donations are a measure of political orientation and enthusiasm, President Barack Obama remains intensely popular among university faculty and staff, outraising presumptive GOP presidential nominee Mitt Romney by a factor of 10 or 20 on some campuses. 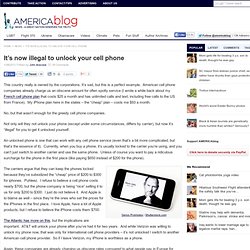 It’s sad, but this is a perfect example. American cell phone companies already charge us an obscene amount for often spotty service (I wrote a while back about my French cell phone plan that costs $25 a month and has unlimited calls and text, including free calls to the US from France). My iPhone plan here in the states – the “cheap” plan – costs me $93 a month. No, but that wasn’t enough for the greedy cell phone companies. Not only will they not unlock your phone (except under some circumstances, differs by carrier), but now it’s “illegal” for you to get it unlocked yourself. An unlocked phone is one that can work with any cell phone service (even that’s a bit more complicated, but that’s the essence of it).

The carriers argue that they can keep the phones locked because they’ve subsidized the “cheap” price of $200 to $300 for iphones. The Atlantic has more on this, but the implications are important. The Most Ridiculous Law of 2013 (So Far): It Is Now a Crime to Unlock Your Smartphone - Derek Khanna. When did we decide that we wanted a law that could make unlocking your smartphone a criminal offense? 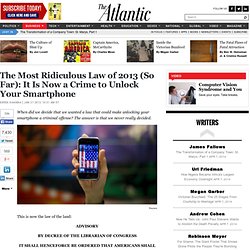 The answer is that we never really decided. Reuters This is now the law of the land:

Hemp. Sustainability. Sustainability Corporations. Supporters & Partners @ Aqueous Solutions. Water. Calendars of important eventz. Self Educate. Create. Books to build it. Coursera. Get Paid to Travel the World – The Tropical MBA — Start and Grow a Global Business From Your Laptop.