The 5 Most Clever Ways People Made Hate Groups Look Stupid. 10 Incredibly Badass Moments From The History Of Art. The Arts Compared to manly professions like logging or bear wrestling, art seems like it’s for sissies. 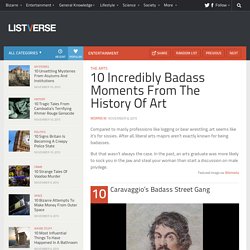 After all, liberal arts majors aren’t exactly known for being badasses. But that wasn’t always the case. In the past, an arts graduate was more likely to sock you in the jaw and steal your woman than start a discussion on male privilege. 8 Great Philosophical Questions That We'll Never Solve. 10 Totally Psychotic Fairy Tales that Hollywood Should Film Next. 10 Former Internet Trolls Explain Why They Quit Being Jerks. 6 Reasons 'Jurassic World' Brutally Killed Its Biggest Hero. If Zara Young, Bryce Dallas Howard's dark-haired assistant, had survived and become the hero, Jurassic World would be a thousand times better. 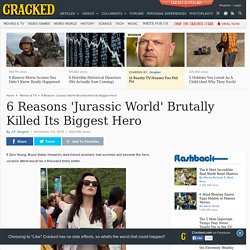 10 Books That Will Change How You Think About Fairy Tales. How and Why Heroes Fell Apart. 10 Real-Life Animal Husbandry Techniques That Alien Zoos Will Use On Us. Is 'It Follows' Paving the Way to a New Era for Indie Gen. By Eric Kohn | Indiewire May 1, 2015 at 3:42PM The indie horror film isn't the only genre title hitting it big these days. 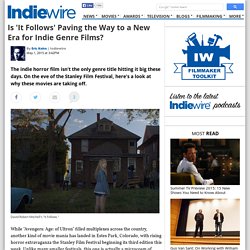 On the eve of the Stanley Film Festival, here's a look at why these movies are taking off. David Robert Mitchell's "It Follows. " While "Avengers: Age: of Ultron" filled multiplexes across the country, another kind of movie mania has landed in Estes Park, Colorado, with rising horror extravaganza the Stanley Film Festival beginning its third edition this week.

Unlike many smaller festivals, this one is actually a microcosm of growing interest in genre films nationwide. READ MORE: Here's How the Stanley Film Festival Immerses Audiences in Horror Close to 100 filmmaker guests have crowded into the creepy hilltop space, where Stephen King famously dreamed up "The Shining," to watch 20 new films, explore six retrospectives and 27 short films.

Attention, Screenwriters: 4 Tips to Help You Find Your St. By Faren Humes | Indiewire May 1, 2015 at 10:38AM "What we should be concerned with is creating full and authentic characters. 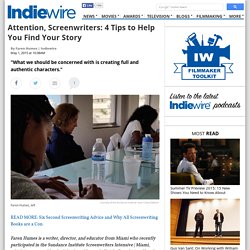 " Character Arc. Home >> Screenwriting >> Character Arc Definitely one of the most basic principles in screenwriting is character arc – the notion that characters must evolve, grow, learn, or change as the plot unfolds. 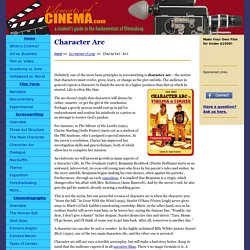 The audience in general expects a character to finish the movie in a higher position than that in which he started. Life is often like that. The arc doesn’t imply that characters will always be richer, smarter, or get the girl at the conclusion. Which Science Fiction Story Could Have Gone In A Much Darker Direction? Which Word Has The Most Fascinating Backstory Behind It? 7 TV Episodes That Resolved Age-Old Philosophical Questions. 12 Ways Humanity Could Destroy The Entire Solar System. 10 Consequences Of Being A Superhero In Real Life. Pop Culture It’s natural to say, “I wish we had a superhero here!” 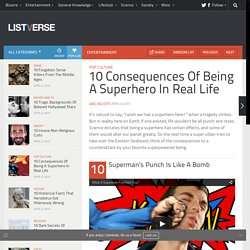 When a tragedy strikes. But in reality here on Earth, if one existed, life wouldn’t be all punch and roses. Science dictates that being a superhero has certain effects, and some of them would alter our planet greatly. 5 Creepy Mysteries With Simple Solutions No One Saw Coming. If there's one thing the news media loves more than spreading bullshit, it's a good unsolved mystery. 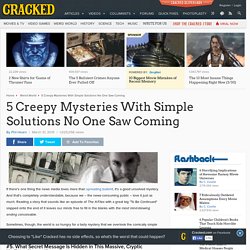 And that's completely understandable, because we -- the news-consuming public -- love it just as much. Reading a story that sounds like an episode of The X-Files with a great big "To Be Continued" slapped onto the end of it leaves our minds free to fill in the blanks with the most mind-blowing ending conceivable. Sometimes, though, the world is so hungry for a tasty mystery that we overlook the comically simple solution that's standing right there in front of us. 4 Creepy Mysteries With Hilariously Stupid Explanations. Our world is full of things no one can explain, from mysterious ancient artifacts to really, really basic stuff we totally should have figured out by now. 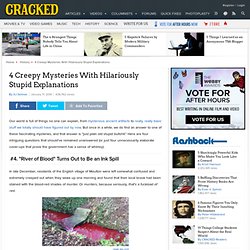 But once in a while, we do find an answer to one of these fascinating mysteries, and that answer is "just plain old stupid bullshit. " Here are four intriguing questions that should've remained unanswered (or just four unnecessarily elaborate cover-ups that prove the government has a sense of whimsy). #4. "River of Blood" Turns Out to Be an Ink Spill In late December, residents of the English village of Moulton were left somewhat confused and extremely creeped out when they woke up one morning and found that their local brook had been stained with the blood-red shades of murder.

What Would Being In A Bunker For 15 Years Really Do To Your Head? The 5 Most Terrifying Robot Advances in Recent History. Robots are terrifying. 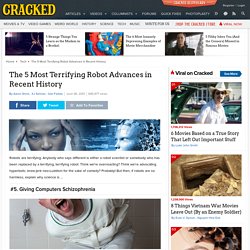 Anybody who says different is either a robot scientist or somebody who has been replaced by a terrifying, terrifying robot. 6 Shocking Ways Robots Are Already Becoming Human. Vladimir Nabokov on Writing, Reading, and the Three Qualities a Great Storyteller Must Have. By Maria Popova. 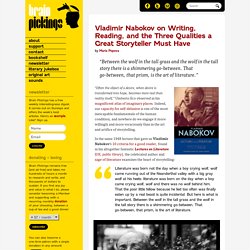 Why Hawkeye And Other Non-Powered Superheroes Are Still Amazing. Here's What The Night Sky Would Look Like With Much Better Eyes. 5 Statistics That Are Eerily Good Judges of Character. According to science fiction, future machines will be able to do just about anything except love and, ironically, the robot dance. No advanced machine in pop culture seems capable of grasping the majestic complexity of the human mind ... which is probably very embarrassing for them because real, modern-day computers can do exactly that. 5 Horrifying Ways an Ex Can Ruin Your Life With Nude Photos.

Professor Annmarie Chiarini, Anisha Vora, and Dr. Holly Jacobs have a few things in common: They've all had explicit photos of themselves shared online, and they've all decided to do something about it. In August of 2012, Jacobs started EndRevengePorn.org and quickly found out that the concept of pornography as vengeance is even stranger than it sounds when we type it out like that. Re-watching Justice League Season One: It's Really Simplistic. A few points of disagreement: SECRET ORIGINS: Genocide on the bad guys really is okay if when they're Xeno-forming Earth into a place people can't live.

The aliens were blocking out the Sun, so no photosynthesis... thus no food for vegans, and no vegans for carnivores... so No People. If there truly is a time and place for everything under Heaven, this sounds like one instance (perhaps the only one) where Genocide is OK. FURY: Even under the best of intentions, parents can alter the way their children perceive the world. Bad People are Made, not Born. /b/ - Random - 4chan. Welcome to the deepest hole in the world. Why Fake-Looking CG Space Battles Are Beautiful. How Could Disney Do This To Maleficent? This. Another Surprising Marvel Hero Joins Captain America: Civil War! Remember the time we bombed Mexico with German rockets? The German rocket scientists were also "spoils of war".

His stories are possibly one of the earliest examples of a shared world that is not driven by a recurring character like the Shadow, Northwest Smith, Conan, etc. 6 Terrible Ideas That Science Says Will Save the Planet. Sharpe (novel series) Sharpe is described as "brilliant but wayward" in Sharpe's Sword, and is portrayed by the author as a 'loose cannon'. A highly skilled leader of light troops, he takes part in a range of historical events during the Napoleonic Wars and other conflicts, including the Battle of Waterloo. The 50 Best Films Of The Decade So Far. By The Playlist Staff | The Playlist February 26, 2015 at 3:21PM. 5 Horrible Life Lessons Learned from Teen Movies.

The Difference Between A Great Twist And A Mediocre Twist. Dad Says He's Mourning His Son; WoW Community Rushes To Help. 5 Historical Figures More Terrifying Than Any Horror Villain. 5 Ways You're Accidentally Making Everyone Hate You. 6 Enlightened Ideas Brought to You by Evil Empires. How One Man Accidentally Forged An Ancient Archaeological Artifact. Which Religions Are Prepared to Accept Life in Space? Why You Should Upload Yourself to a Supercomputer. What Would Global Wealth Equality Look Like? Edge Asks The Intellects: What Do You Think About Machines That Think? Can we bring the Greek Gods back, please? ​9 Roman Gods Who Weren't Just Rip Offs Of Greek Gods. 10 Rules For Making Better Fantasy Maps. Who the fuck is my #DND character? Neil Gaiman’s 8 Rules of Writing. 5 Stupid Movie Genres (and Why They're so Popular) Why I'm Kind Of Tired Of The "Smartest Man In The Room" The Best of 2014 Movies, Books, Music and More: A List of Year-End Lists.

The Bizarre Case of the Woman Who Saw Dragons Everywhere. Top 10 Harshest Lessons That 2014 Has Taught The Entertainment Industry. How Much Money Would an Earth-Like Exoplanet Really Be Worth to Us? Great Opening Sentences From Science Fiction.