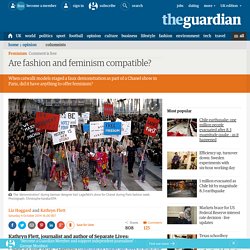 Chanel: co-opting feminism at Paris fashion week. A man in a floral shirt is trying too hard. At the heart of consumer culture is a simple and seductive lie: we are what we buy. 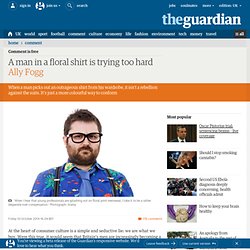 Were this true, it would seem that Britain’s men are increasingly becoming a range of floral patterned shirts. Why are NHS staff striking? Last year, the independent NHS Pay Review Body, whose judgments ministers have traditionally honoured, said that all NHS staff in England deserved a 1% pay rise from 1 April 2014 and that the service, despite growing financial pressure, could afford it. 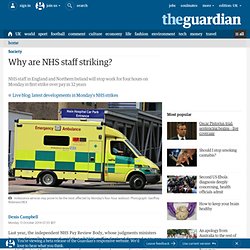 After two years of pay freezes and another year of just a 1% rise in salary, staff were grateful for, though not bowled over by, the proposed 1%. However, the health secretary, Jeremy Hunt, cancelled the recommended across-the-board increase. From whey protein to spirulina: are superfood powders set to be as popular as the Paleo diet? Do Detox Drinks Work? The Health Benefits of Tea. We’re weary of any trend that involves detoxing with just a drink. 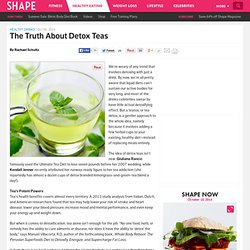 By now, we’re all pretty aware that liquid diets can’t sustain our active bodies for very long, and most of the drinks celebrities swear by have little actual detoxifying effect. But a teatox, or tea detox, is a gentler approach to the whole idea, namely because it involves adding a few herbal cups to your existing, healthy diet—instead of replacing meals entirely. The idea of detox teas isn’t new: Giuliana Rancic famously used the Ultimate Tea Diet to lose seven pounds before her 2007 wedding, while Kendall Jenner recently attributed her runway-ready figure to her tea addiction (she reportedly has almost a dozen cups of detox branded lemongrass-and-green-tea blend a day!). But when it comes to detoxification, tea alone isn’t enough for the job.

In fact, there is no hard evidence backing the claims made by tea companies that their detox teas actually purify human cells. 15-year-old boy's "magnificent" letter about Emma Watson's UN speech. Headscarf ban turns France’s Muslim women towards homeworking. Emma Watson at the HeForShe Campaign 2014 - Official UN Video. Emotional Intelligence: Why Every Brand Should Have It.

September 23, 2014: Last week, I had the opportunity to interview Jen Groover. 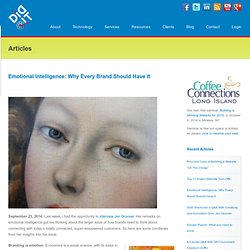 Her remarks on emotional intelligence got me thinking about the larger issue of how brands need to think about connecting with today’s totally connected, super-empowered customers. So here are some corollaries from her insights into the issue: When someone buys a Craftsman tool, they are buying the narrative of the brand. Britons spend more on drugs and hookers than on beer and wine. Last year, Britain spent £12.3 billion on illegal substances and dalliances with prostitutes – far more than the mere £11 billion we swilled down in the form of beer and wine. 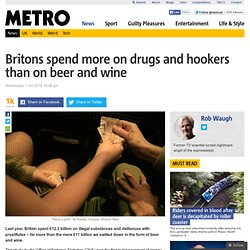 The study, by the Office of National Statistics (ONS) was the first to take account of money spent on illegal activities such as hard drugs and buying sex. The statistics body was pushed by the European Union to investigate spending on illegal activities so that the EU can compare national economies accurately. Ebola crisis: Aid workers risking all to combat virus. 2 October 2014Last updated at 12:48 ET Mark Buttle of Save the Children, back from Sierra Leone, says the Ebola crisis could "spiral out of control" The Ebola crisis is spreading rapidly. 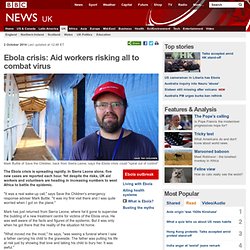 In Sierra Leone alone, five new cases are reported each hour. Yet despite the risks, UK aid workers and volunteers are heading in increasing numbers to west Africa to battle the epidemic. Why Ebola is so dangerous. Emma Watson at the HeForShe Campaign 2014 - Official UN Video. Caitlin Moran's 5 rules of feminism are excellent. In case you didn't already know, Caitlin Moran is awesome. 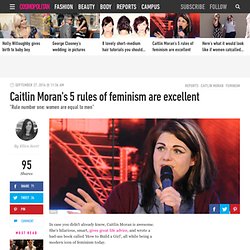 She's hilarious, smart, gives great life advice, and wrote a bad-ass book called 'How to Build a Girl', all while being a modern icon of feminism today. This week Caitlin Moran continues to be a lovely woman and an endless source of inspiration, this time by sitting down with The Huffington Post and telling us the five simple rules of being a feminist.

They're pretty easy, and seriously cannot be misinterpreted as 'man-hating' or anything else people STILL weirdly think feminism is. Top 7 social media marketing trends in 2014. A Social Summer Round Up. Monday 1st September, this can only mean one thing, summer is coming to an end. 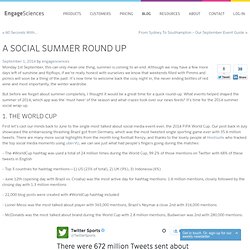 Although we may have a few more days left of sunshine and flipflops, if we’re really honest with ourselves we know that weekends filled with Pimms and picnics will soon be a thing of the past. It’s now time to welcome back the cosy night in, the never ending bottles of red wine and most importantly, the winter wardrobe. But before we forget about summer completely, I thought it would be a great time for a quick round-up. What events helped shaped the summer of 2014, which app was the ‘must have’ of the season and what crazes took over our news feeds?