עידן האינטרנט הרביעי בפתח והוא כולל פוטנציאל אדיר לסטארטאפים ישראלים. Viola Notes. Mapping the Israeli Virtual Reality and Augmented Reality Startup Landscape. Virtual and Augmented Reality are still in their infancy in terms of consumer adoption, and depending on who you ask – whether it’s VCs, analysts, skeptics, visionaries, tech enthusiasts, sociologists and so on – you’ll get different answers as to how brightly the future is shining for the VR-AR-related markets. 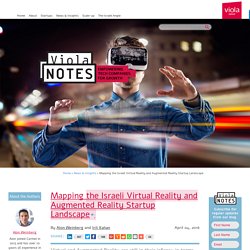 So how will the now much-shared picture of Mark Zuckerberg at last month’s Mobile World Congress 2016 be perceived five years from now: As a defining event, or a reminder of unjustified hype? And how is Israel faring in midst of all of this VR-AR innovation? Mark Zuckerberg at Mobile World Congress 2016 VCs and analysts have been trying to get a sense of the maturity of the Virtual Reality (VR) and Augmented reality (AR) market in terms of technology, cost and use cases in order to estimate its growth and total addressable market. 2016 estimates for worldwide Virtual Reality hardware install base according to SuperData (click to enlarge) The Israeli Landscape.

FuckUp Nights Tel Aviv: Where mistakes turn into lessons. Since landing in Israel in January, the Fuckup Nights global forum has taken off and is packing out the house in its monthly Tel Aviv events, and is heading next for Jerusalem. 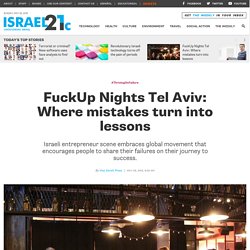 As the name suggest, Fuckup Nights enable entrepreneurs to publicly share their business flubs and faux pas. “The goal is to encourage a culture of dialogue in the entrepreneurial ecosystem in Tel Aviv on success and failure, while emphasizing the idea that failure is part of how we learn and grow,” says Leora Golomb, director of Fuckup Nights Tel Aviv.

Failure has oft been cited as one of Israel’s keys to phenomenal startup success. Even when failure seems the likeliest outcome, Israeli entrepreneurs continue to give it their best. IATI - Israel Advanced Technology Industries. Smart City & Living Accelerator Amsterdam. Startupbootcamp is the number 1 accelerator in Europe. 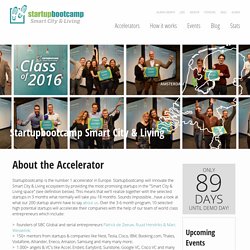 Startupbootcamp will innovate the Smart City & Living ecosystem by providing the most promising startups in the "Smart City & Living space" (see definition below). This means that we'll realize together with the selected startups in 3 months what normally will take you 18 months. Sounds impossible...have a look at what our 200 startup alumni have to say about us. Over the 3-6 month program, 10 selected high potential startups will accelerate their companies with the help of our team of world class entrepreneurs which include: > founders of SBC Global and serial entrepreneurs Patrick de Zeeuw, Ruud Hendriks & Marc Wesselink;> 150+ mentors from startups & companies like Nest, Tesla, Cisco, IBM, Booking.com, Thales, Vodafone, Alliander, Eneco, Amazon, Samsung and many many more; > 1.000+ angels & VC's like Accel, Endeit, Earlybird, Sunstone, Google VC, Cisco VC and many more.

Our Smart City & Living segments are: Startupbootcamp - Best Startup Accelerator 2014. The Spark (@TheSparkMaalot) My co-founder wants >50% equity as he develops the tech. I finance the company and bring in all our clients. What is fair? Neither could exist alone. - Quora. German utility RWE to hold Israel startup competition. German company RWE, the third largest electricity and energy supplier in Europe, is announcing its first startup competition in Israel. 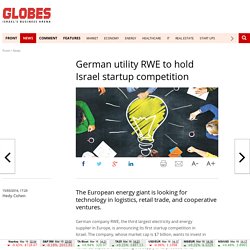 The company, whose market cap is $7 billion, wants to invest in Israeli technologies, mainly in logistics, retail trade, and cooperative ventures, capable of increasing the supply of its products to its European customers. The winning entrepreneurs will take part in the company's innovation program in Germany, and begin cooperating with the company and its customers. Exactly one year ago, "Globes" revealed that RWE was looking for investments in Israeli technologies as part of its strategy of expanding its global business. The company plans to invests tens of millions of euros in finding technologies that will enable it to provide added value to its customers. In addition to Israel, the company is also seeking investments in Silicon Valley.

At New York City’s newest university, the Ivory Tower is being declared dead before it even gets built. 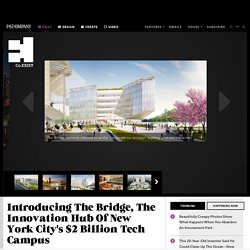 That’s the philosophy embodied in the name the Bridge, one of three buildings slated to open in 2017 during the first phase of construction of Cornell Tech’s new $2 billion, 12-acre campus on Roosevelt Island. The graduate school—a pillar of New York City’s efforts to grow its tech economy—is not shy about its desire to knock down traditional barriers between academia and industry collaboration.

The Bridge, formerly referred to as the "corporate co-location" building, is where the action will happen. "It's taking this notion of the commercialization of academia to a higher plane," says MaryAnne Gilmartin, CEO of Forest City Ratner Companies, the owner and developer of the building. Incubatenergy Network. זה נשמע הזוי - אבל זה יכול לשנות את המציאות - מגזין TheMarker. 4 Key Ingredients For Creating An Ideas Incubator.

There’s a crazy game played in Japan that looks like a cross between rugby, wrestling, and capture the flag. 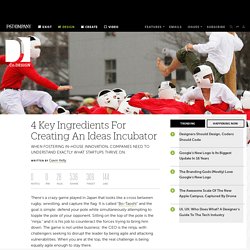 How To Make The Most Of Your Startup Accelerator Program Experience. Editor’s note: Lyle Stevens is the CEO and co-founder of Mavrck. 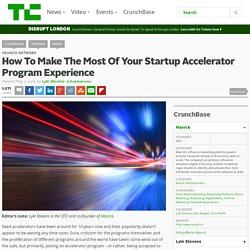 Seed accelerators have been around for 10 years now and their popularity doesn’t appear to be waning any time soon. Sure, criticism for the programs themselves and the proliferation of different programs around the world have taken some wind out of the sails, but primarily, joining an accelerator program – or rather, being accepted to an accelerator – is still considered valuable and an endorsement of the concept and business model. The best accelerators are incredibly competitive – Y Combinator and TechStars have application acceptance rates as low as 1 to 3 percent. מקאן אריקסון תשקיע 15 מיליון דולר נוספים ב-TheTime של אילן שילוח. Why the Motto 'If You Build It, They Will Come' is BS. "If you build it, they will come. 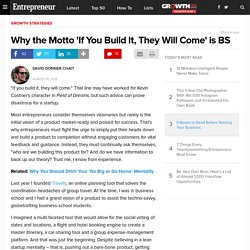 " That line may have worked for Kevin Costner's character in Field of Dreams, but such advice can prove disastrous for a startup. Most entrepreneurs consider themselves visionaries but rarely is the initial vision of a product market-ready and poised for success. That's why entrepreneurs must fight the urge to simply put their heads down and build a product to completion without engaging customers for vital feedback and guidance. Instead, they must continually ask themselves, "who are we building this product for? Good Company Ventures – Home. Join.anyguide. At AnyGuide, a multicultural company based in San Francisco and Athens, we’re on a mission to give professional guides and small business owners a competitive edge in the world of modern tourism – for free! 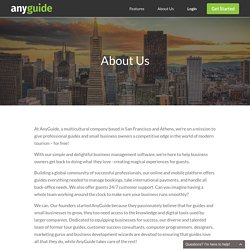 With our simple and delightful business management software, we're here to help business owners get back to doing what they love - creating magical experiences for guests. Building a global community of successful professionals, our online and mobile platform offers guides everything needed to manage bookings, take international payments, and handle all back-office needs. We also offer guests 24/7 customer support. Can you imagine having a whole team working around the clock to make sure your business runs smoothly? James Currier And Stan Chudnovsky Take The Wraps Off Their New Incubator, NFX Guild. A new Bay Area accelerator, NFX Guild, has emerged on the scene with plans to run a three-month-long program twice a year for between 10 and 15 companies. 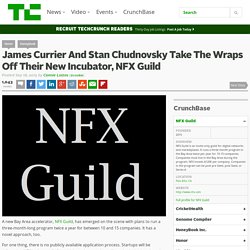 It has a novel approach, too. For one thing, there is no publicly available application process. Startups will be referred to NFX by “scouts,” after which a select number will receive invitations into the program.