Intellectual Freedom and Censorship For Students

These resources may be of interest to high school students curious to know more about intellectual freedom, censorship, and their rights to freedom of expression, including the freedom to read.

Your Right to Free Expression - ACLU. Getting an education isn't just about books and grades - we're also learning how to participate fully in the life of this nation. 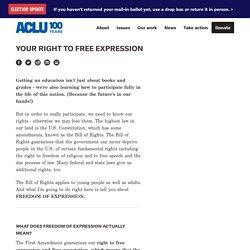 (Because the future's in our hands!) But in order to really participate, we need to know our rights - otherwise we may lose them. The highest law in our land is the U.S. Constitution, which has some amendments, known as the Bill of Rights. The Bill of Rights guarantees that the government can never deprive people in the U.S. of certain fundamental rights including the right to freedom of religion and to free speech and the due process of law. The Bill of Rights applies to young people as well as adults. The First Amendment guarantees our right to free expression and free association, which means that the government does not have the right to forbid us from saying what we like and writing what we like; we can form clubs and organizations, and take part in demonstrations and rallies. Yes. Also, school officials may not censor only one side of a controversy. No. Children's Rights to Read - ILA.

Censorship and Your Freedom to Read - ReadWriteThink. About Banned & Challenged Books - ALA. Does ALA ban books? 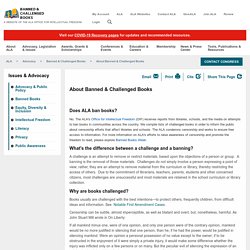 No. The ALA's Office for Intellectual Freedom (OIF) receives reports from libraries, schools, and the media on attempts to ban books in communities across the country. The Fiery History of Banned Books (Feat. Princess Weekes) Banned Books Week. Top 10 Most Challenged Books of 2019. Top 10 Challenged Books of 2019 - ALA OIF. ALA Releases List of Top 100 Most Banned and Challenged Books - Publisher's Weekly. As part of the American Library Association's annual Banned Books Week (which this year runs from September 27 to October 3), the organization has released a list of the 100 most banned and challenged books of the last decade, 2010-2019. 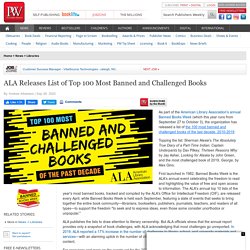 Topping the list: Sherman Alexie's The Absolutely True Diary of a Part-Time Indian; Captain Underpants by Dav Pilkey; Thirteen Reasons Why by Jay Asher, Looking for Alaska by John Green, and the most challenged book of 2019, George, by Alex Gino. First launched in 1982, Banned Books Week is the ALA's annual event celebrating the freedom to read and highlighting the value of free and open access to information.

ALA publishes the lists to draw attention to literary censorship. But ALA officials stress that the annual report provides only a snapshot of book challenges, with ALA acknowledging that most challenges go unreported. 8 Quotes from YA Authors on Banned Books - EpicReads. Kid's Right to Read Action Kit - NCAC. Penguin Presents: Authors Stand Up for Free Speech. Banned Websites Awareness Day - AASL. To raise awareness of the overly restrictive blocking of legitimate, educational websites and academically useful social networking tools in schools and school libraries, AASL has designated one day during Banned Books Week as Banned Websites Awareness Day. 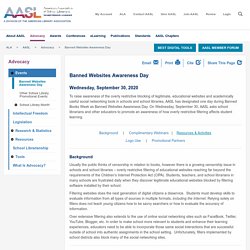 On Wednesday, September 30, AASL asks school librarians and other educators to promote an awareness of how overly restrictive filtering affects student learning. Background | Complimentary Webinars | Resources & Activities Logo Use | Promotional Partners Background Usually the public thinks of censorship in relation to books, however there is a growing censorship issue in schools and school libraries – overly restrictive filtering of educational websites reaching far beyond the requirements of the Children’s Internet Protection Act (CIPA). Filtering websites does the next generation of digital citizens a disservice. Resources Intellectual Freedom related posts on Knowledge Quest AASL White Paper on Educational Technology in Schools. Special Interest: TikTok, Intellectual Freedom, and Privacy. By: Lisa Hoover China has been receiving media attention for free speech issues again this month, with the focus on Hong Kong this time. 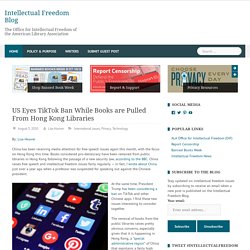 Books considered pro-democracy have been removed from public libraries in Hong Kong following the passage of a new security law, according to the BBC. China raises free speech and intellectual freedom issues fairly regularly — in fact, I wrote about China just over a year ago when a professor was suspended for speaking out against the Chinese president.

At the same time, President Trump has been considering a ban on TikTok and other Chinese apps. I find these two issues interesting to consider together. The removal of books from the public libraries raises pretty obvious concerns, especially given that it is happening in Hong Kong, a “special administrative region” of China that maintains a fairly high level of independence from mainland China. Reference list: BBC News (2020) Hong Kong security law: Pro-democracy books pulled from libraries.