The power of words

Words Have Power. Words have power. 101 Anti Bullying Slogans That Have An Impact. You are in the right place for some awesome anti bullying slogans. 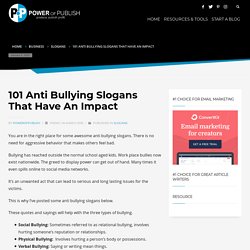 There is no need for aggressive behavior that makes others feel bad. Bullying has reached outside the normal school aged kids. What is the Difference Between Online Hate and Free Speech? When concerns are raised about ‘Hate Speech’, a standard response is to argue that it is simply someone exercising an entitlement to free speech. 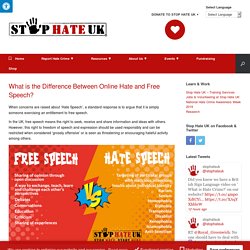 In the UK, free speech means the right to seek, receive and share information and ideas with others. However, this right to freedom of speech and expression should be used responsibly and can be restricted when considered ‘grossly offensive’ or is seen as threatening or encouraging hateful activity among others. Resultado de imágenes de Google para. 20 Words That Helped Define The Decade. There are many factors that define a decade ― news events, works of entertainment, technological advancements, fashion trends and more. 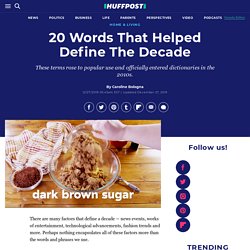 Perhaps nothing encapsulates all of these factors more than the words and phrases we use. As the decade comes to a close, we rounded up 20 words and phrases that rose to popular use and even entered dictionaries between 2010 and 2019. While many obviously relate to technology, others point to social movements, pop culture events and even food trends. 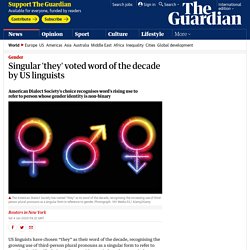 The American Dialect Society also bestowed its word of the year honours on the increasingly common practice of introducing oneself in correspondence or socially by the set of pronouns one prefers to be called by – declaring in an email, for example, “pronouns: she/her”. The two awards were decided on Friday in New Orleans by about 350 member of the society at its annual meeting of academics, graduate students and word lovers who voted by a show of hands, said Ben Zimmer, a linguist and lexicographer who chairs the group’s new words committee. The same trend was behind the selection of “they” as the word of the decade, recognising its growing use to refer to a person whose gender identity is non-binary.

Other decade nominees considered on Friday included: The words and phrases that defined the decade. Oxford Languages. How the Media Uses Language to Manipulate Us - The Writer's Cookbook. Orwell Got it Right: How Language Manipulates and Controls. 12-year-old commits suicide after months of online torment. Trump's “77-Word” Vocabulary Makes Him Smarter Than We Realize. There’s not much variety to the words President Donald Trump spits out, but we know which ones are his: To Americans, words like “loser”, “sad”, and “stupid” have become ubiquitous with Trump in 2017. 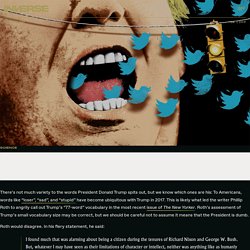 Trump speaks at level of 8-year-old, new analysis finds. Donald Trump may call himself a genius on Twitter, but his spoken statements say otherwise. 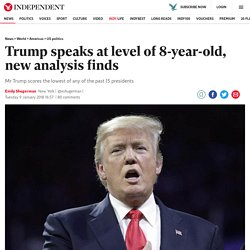 An analysis of the President's first 30,000 words uttered in office found Mr Trump speaks at a third- to seventh-grade reading level – lower than any other President since 1929. Mr Trump’s vocabulary and grammatical structure is “significantly more simple, and less diverse” than any President since Herbert Hoover, the analysis found. The comparison is based on interviews, speeches and press conferences for every president dating back to 1929, compiled by online database Factba.se.

Analysts at Factba.se studied the “off-script” remarks of all 15 men – essentially, everything but their prepared speeches – to compare and contrast their speaking skills. Download the new Indpendent Premium app Sharing the full story, not just the headlines Analysts ran the records through eight different tests for vocabulary complexity, diversity, and comprehension level. Banned Books Week: Here are the 11 most challenged books last year. In 2018, at least 347 challenges were filed seeking to remove 483 books from libraries or schools, according to a recent news release from the American Library Association (ALA), a sponsor of Banned Books Week, which runs September 22-28. 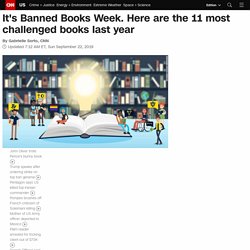 The annual event started in 1982, the same year the Supreme Court ruled that students' First Amendment rights were violated when Kurt Vonnegut's "Slaughterhouse-Five" and eight other books were removed from school libraries. Since then, books such as the "Harry Potter" series and "The Adventures of Captain Underpants" have made the list. Despite the legal precedent, schools and libraries still receive formal challenges to remove books from library shelves or nix them from reading lists to protect children from material some people see as inappropriate. In 2018, more than half the books that drew complaints did so because they contained LGBTQIA+ content, the ALA said. September 22-28, 2019. FAHRENHEIT 451 Official Trailer #2 (2018) Michael B. Jordan, Michael Shannon Sci-Fi Movie HD.

The Power of Words. Giving teens a second chance. On Sept. 9, 2013, after enduring years of horrific cyberbullying at the hands of her Lakeland, Fla., classmates, 12-year-old Rebecca Sedwick climbed to the top of a water tower and leapt to her death. 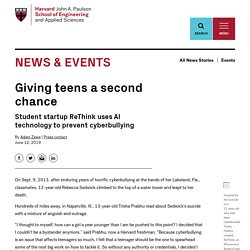