Australian Explorers. In 1788, with the arrival of the first fleet, little was known about this wide brown land which we now call Australia. 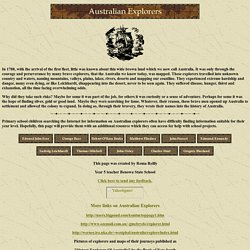 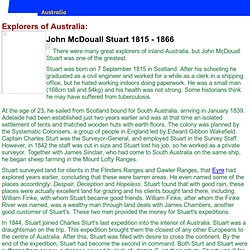 Charles Sturt - easier version. The western rivers of New South Wales had been discovered, but no one knew where they flowed. 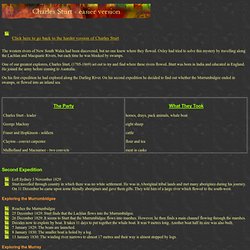 Oxley had tried to solve this mystery by travelling along the Lachlan and Macquarie Rivers, but each time he was blocked by swamps. One of our greatest explorers, Charles Sturt, (1795-1869) set out to try and find where these rivers flowed. Sturt was born in India and educated in England. He joined the army before coming to Australia. On his first expedition he had explored along the Darling River. Third Expedition For 14 years, Sturt gave up exploring. Sturt spent the next 8 years in Adelaide as colonial treasurer and later as colonial secretary.

Australian Explorers. John Oxley. Explorers of AustraliaJohn Oxley (1785 - 1828) John Oxley was born in England and sailed to Australia as a surveyor with the Royal Navy in 1801. 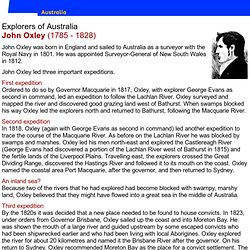 He was appointed Surveyor-General of New South Wales in 1812. John Oxley led three important expeditions. First expedition Ordered to do so by Governor Macquarie in 1817, Oxley, with explorer George Evans as second in command, led an expedition to follow the Lachlan River. Oxley surveyed and mapped the river and discovered good grazing land west of Bathurst. Second expedition In 1818, Oxley (again with George Evans as second in command) led another expedition to trace the course of the Macquarie River. An inland sea? Third expedition By the 1820s it was decided that a new place needed to be found to house convicts. Last days Oxley became a farmer and sheep breeder. A map of Oxley's expeditions can be seen here Acknowledge this source in your bibliography like this: Sydenham & Thomas, John Oxley. 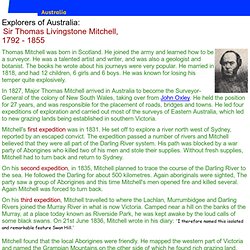 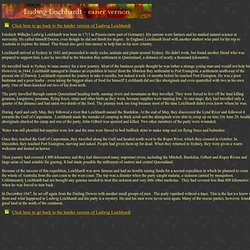 His parents were farmers and he studied natural science at university. He called himself Doctor, even though he did not finish his degree. In England Leichhardt lived with another student who paid for his trip to Australia to explore the inland. This friend also gave him money to help him in his new country. Edmund Kennedy - easier version. Hume and Hovell. Explorers of Australia:Hamilton Hume (1797- 1872) and William Hovell (1786-1875) Hamilton Hume was born in Parramatta,New South Wales on 18 June 1797. 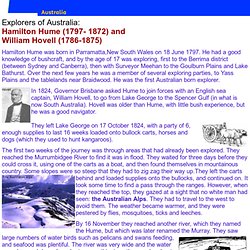 He had a good knowledge of bushcraft, and by the age of 17 was exploring, first to the Berrima district (between Sydney and Canberra), then with Surveyor Meehan to the Goulburn Plains and Lake Bathurst. Over the next few years he was a member of several exploring parties, to Yass Plains and the tablelands near Braidwood. John Forrest - easier version. 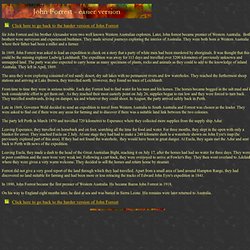 Later, John forrest became premier of Western Australia. Both brothers were surveyors and experienced bushmen. They made several journeys exploring the interior of Australia. They were both born is Western Australia where their father had been a miller and a farmer. Edmund Kennedy: Australian Explorer. Advertisement. 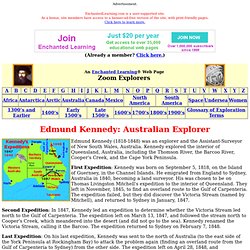 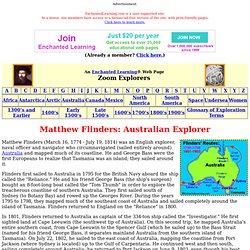 EnchantedLearning.com is a user-supported site. As a bonus, site members have access to a banner-ad-free version of the site, with print-friendly pages.Click here to learn more. (Already a member? Click here.) James Cook: British Explorer. James Cook: British Explorer James Cook (October 27, 1728 - February 14, 1779) was a British explorer and astronomer who went on many expeditions to the Pacific Ocean, the Antarctic, the Arctic, and around the world. Cook's first journey lasted from August 26,1768 to July 13, 1771, when he sailed to Tahiti on the Endeavor in order to observe Venus as it passed between the Earth and the Sun (this is called the transit of Venus, when Venus is visible as a small black dot moving across the Sun; the time of transit was used to calculate a more accurate distance between the Earth and the Sun).

Cook was also searching for a large, southern continent that was thought to exist (but does not). Many scientists accompanied him on the voyage, including the botanist Joseph Banks. He then sailed to and mapped eastern Australia (the Endeavor was stuck for a day on the Great Barrier Reef off northeastern Australia; the ship was damaged by coral and almost sank). Explorers of Australia.

James Cook (October 27, 1728- February 14, 1779) was a British explorer and astronomer who went on many expeditions to the Pacific Ocean, Antarctic, Arctic, and around the world. Cook's first journey was from 1768 to 1771, when he sailed to Tahiti in order to observe Venus as it passed between the Earth and the Sun (in order to try to determine the distance between the Earth and the Sun).