Burlington Contemporary - Reviews - Orlando at the present time. ‘Yesterday morning I was in despair. 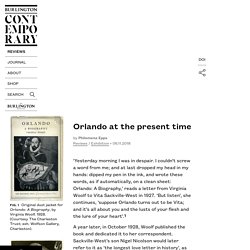 I couldn’t screw a word from me; and at last dropped my head in my hands: dipped my pen in the ink, and wrote these words, as if automatically, on a clean sheet: Orlando: A Biography,’ reads a letter from Virginia Woolf to Vita Sackville-West in 1927. ‘But listen’, she continues, ‘suppose Orlando turns out to be Vita; and it’s all about you and the lusts of your flesh and the lure of your heart’. ‘Different sex. Same person’: how Woolf’s Orlando became a trans triumph. Virginia Woolf and Vita Sackville-West were lovers. 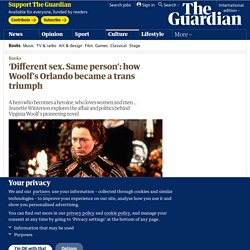 Does that mean they had sex? It probably does, because Vita liked sex and was a pursuer of women. She also enjoyed a long and successful marriage to Harold Nicolson. He too had his affairs. Virginia and Leonard Woolf were largely compatible and certainly affectionate. Had the love affair not happened Orlando would never have been written. Orlando is not the first piece of fiction about a sex change. It is likely that the title of Woolf’s novel comes out of As You Like It, where the heroine Rosalind disguises herself as Ganymede, and in that guise teaches the man she loves – Orlando – how to love in return. 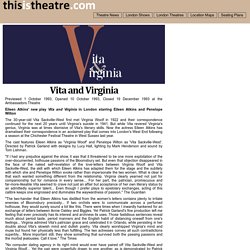 But while Vita revered Virginia's genius, Virginia was at times dismisive of Vita's literary skills. Now the actress Eileen Atkins has dramatised their correspondence in an acclaimed play that comes into London's West End following a season at the Chichester Festival Theatre in West Sussex last year. The cast features Eileen Atkins as 'Virginia Woolf' and Penelope Wilton as 'Vita Sackville-West'. "If I had any prejudice against the show, it was that it threatened to be one more exploitation of the over-documented, hothouse passions of the Bloomsbury set. 'I felt kind of promiscuous': Gemma Arterton on Vita and Virginia.

Gemma Arterton and Chanya Button are frolicking for the camera in a female-only London club. 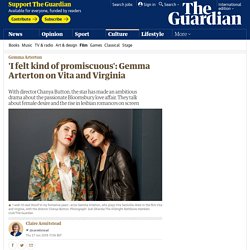 Behave as if you would normally, orders the photographer. “We could cuddle up,” quips Arterton, “but that would give the wrong impression.” She has just rushed up from Chichester, where she is staying with her boyfriend Rory Keenan, while he performs in a play. It’s a reminder – if any were needed – that both women are busy, busy, busy. They have arrived late, creating a comic road-drama of their own as their respective assistants monitored their cars converging from different directions. Virginia Woolf Love Story. A Short History of LGBT Rights in the UK. This article traces the journey of the LGBT community from 1533 to today, looking at the battles for equality that were fought and legislative changes made. 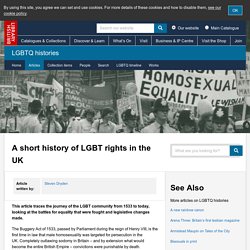 The Buggery Act of 1533, passed by Parliament during the reign of Henry VIII, is the first time in law that male homosexuality was targeted for persecution in the UK. Completely outlawing sodomy in Britain – and by extension what would become the entire British Empire – convictions were punishable by death. It was not until 1861 with the passing of the Offences Against the Person Act, that the death penalty was abolished for acts of sodomy – instead being made punishable by a minimum of 10 years imprisonment. The Criminal Law Amendment Act 1885 however, went a step further once again, making any male homosexual act illegal – whether or not a witness was present – meaning that even acts committed in private could be prosecuted.

Female homosexuality was never explicitly targeted by any legislation. The True Story of Virginia Woolf and Vita Sackville-West. Afterwords: Moving Letters of Condolence on Virginia Woolf's Death. On March 28, 1941, shortly after the gruesome onset of WWII, Virginia Woolf (January 15, 1882–March 28, 1941) filled the pockets of her overcoat with rocks, treaded into the River Ouse behind the house in East Sussex where she lived with her husband Leonard, and drowned herself. 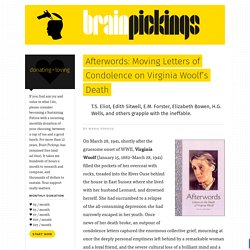 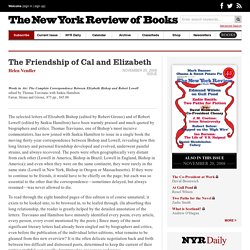 The Curious Friendship of Elizabeth Bishop and Robert Lowell. Influenced both by Bishop’s conversational tone and, as Jamison points out, by his therapist’s urgings to explore his childhood, Lowell shifted register in Life Studies. 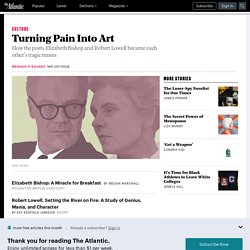 The volume traces an arc from formal historical poems to autobiographical free verse describing his hospitalizations, the strains that manic depression placed on his marriage, and his shame—offering up what the critic M. L. Rosenthal dubbed “the most naked kind of confession,” a form of “soul’s therapy.” The revelations were his, but the emotional clarity seems learned from Bishop. Review: Words In Air: The Complete Correspondence Between Elizabeth Bishop and Robert Lowell. Like another Elizabeth and Robert before them, Elizabeth Bishop and Robert Lowell were in love; but they had more formidable obstacles to cope with than Elizabeth Barrett's and Robert Browning's comparatively tame encounters with Victorian respectability. 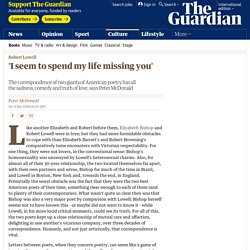 For one thing, they were not lovers, in the conventional sense: Bishop's homosexuality was unswayed by Lowell's heterosexual charms. Also, for almost all of their 30-year relationship, the two located themselves far apart, with their own partners and wives, Bishop for much of the time in Brazil, and Lowell in Boston, New York and, towards the end, in England. Potentially the worst obstacle was the fact that they were the two best American poets of their time, something clear enough to each of them (and to plenty of their contemporaries).

If these letters had a motto, it would be the last line of Bishop's poem "The Bight": "Awful but cheerful". Dear Elizabeth. E_lizabeth Bishop and Robert Lowell were introduced to each other in New York in 1947, by the poet and critic Randall Jarrell. 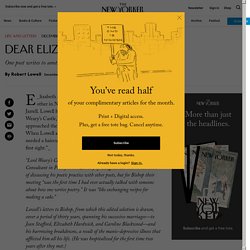 Lowell had just published his second book of poems, “Lord Weary’s Castle,” and Bishop her first, “North & South.” Bishop approached the evening, she later wrote, “in fear and trembling.” When Lowell arrived, in a wrinkled suit, and looking as though he needed a haircut and a new pair of shoes, she said, “I loved him at first sight.”_ “Lord Weary’s Castle” won the Pulitzer Prize, and Lowell was named Consultant in Poetry to the Library of Congress. A Great Poetic Twosome: The Elizabeth Bishop-Robert Lowell Letters. The poets Elizabeth Bishop and Robert Lowell met in 1947 at a New York dinner party held by Randall Jarrell. She was 36 and had just published her first book of poems. He was 30 and had just won a Pulitzer Prize. Later, she wrote that she’d gone to the party with “fear and trembling.”

“Then Lowell arrived and I loved him at first sight. . . . My shyness vanished and we started talking at once. . . . 11 Beautiful Friendships Between Classic Authors. Great writers tend to want to be at the top of their field, so literature can be a cutthroat community. It’s hard to imagine wanting to hang out with a direct rival, and indeed, plenty of authors have feuded with each other or publicly derided each other’s work. But this doesn’t tell the whole story; writers can also glean considerable benefits from spending time around other writers. As any author who’s spent time in an MFA program or writing workshop can tell you, the opportunity to provide mutual support and feedback can ease the creative process. Even aside from these practicalities, writers often share experiences and interests others don’t -- and sharing something few others understand can truly draw people together.