Garbage City: The scavengers making a fortune from other people's rubbish. New research considers 'growing' drones. Can you chemically "grow" a military drone? 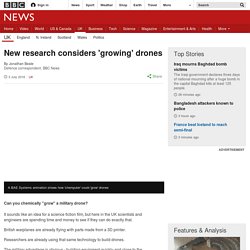 It sounds like an idea for a science fiction film, but here in the UK scientists and engineers are spending time and money to see if they can do exactly that. British warplanes are already flying with parts made from a 3D printer. Researchers are already using that same technology to build drones. The military advantage is obvious - building equipment quickly and close to the battlefield - without long waits and long supply chains - gives you an enormous advantage over any enemy. 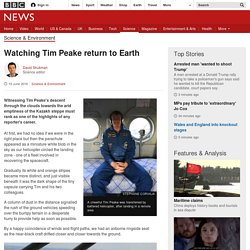 At first, we had no idea if we were in the right place but then the parachute appeared as a miniature white blob in the sky as our helicopter circled the landing zone - one of a fleet involved in recovering the spacecraft. Gradually its white and orange stripes became more distinct, and just visible beneath it was the dark shape of the tiny capsule carrying Tim and his two colleagues. A column of dust in the distance signalled the rush of the ground vehicles speeding over the bumpy terrain in a desperate hurry to provide help as soon as possible.

By a happy coincidence of winds and flight paths, we had an airborne ringside seat as the near-black craft drifted closer and closer towards the ground. Rolls-Royce shows 'floating' future car. Creating the world's new chess capital. Chess is a global game, enjoyed by millions around the world. 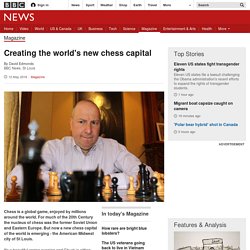 For much of the 20th Century the nucleus of chess was the former Soviet Union and Eastern Europe. But now a new chess capital of the world is emerging - the American Midwest city of St Louis. It's a beautiful spring evening and Chuck is sitting opposite me, outside the St Louis chess club. He's an African-American in late middle age who, during the day, runs a business selling meat. But this is where he comes after work. Building the world's largest radio telescope. Mozart of Chess: Magnus Carlsen. Children should be allowed to get bored, expert says. 22 March 2013Last updated at 20:38 ET By Hannah Richardson BBC News education reporter Dr Belton said children needed time to stand and stare Children should be allowed to get bored so they can develop their innate ability to be creative, an education expert says. 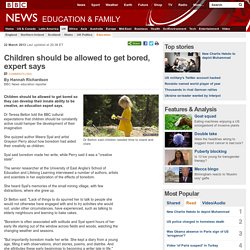 Dr Teresa Belton told the BBC cultural expectations that children should be constantly active could hamper the development of their imagination. Eureka! How to make discoveries at the speed of light. Image copyright Thorbjorn Hansen/Rockphoto The Roskilde music festival in Denmark is a huge logistical undertaking, attracting 130,000 visitors each year. 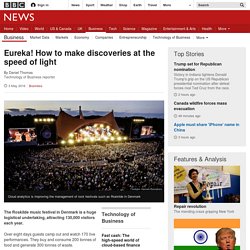 Over eight days guests camp out and watch 170 live performances. They buy and consume 200 tonnes of food and generate 300 tonnes of waste. BBC iWonder - Can singing in a choir make me healthier? Borrower returns library book 67 years late – but escapes $24,000 fine. A woman has brought back a book to a New Zealand library 67 years after it was due to be returned. 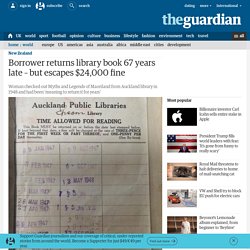 Myths and Legends of Maoriland by AW Reed was checked out by a girl in 1948 and not seen again. But on Thursday a woman returned the book to a startled librarian at Auckland library and asked how much her late fines would be for returning the book 24,605 days past its due date. “She told me she had checked out the book as a child and been meaning to return it for years,” said librarian Zoe Cornelius. What Jobs "Game Of Thrones" Characters Would Have If They Worked At An Ad Agency. Future - We went to Nasa to float on the world’s flattest floor. I am sitting on a sofa, floating through the void. 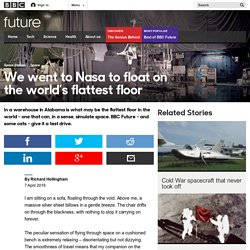 Above me, a massive silver sheet billows in a gentle breeze. The chair drifts on through the blackness, with nothing to stop it carrying on forever. The peculiar sensation of flying through space on a cushioned bench is extremely relaxing – disorientating but not dizzying. The smoothness of travel means that my companion on the sofa – a Nasa spacecraft engineer – is sitting with her legs crossed and eyes shut in an apparent zen-like trance as we spin gently through the dark. Sadly, all too soon our space sofa bumps up against the boarding platform and we step back onto the solid ground of Nasa’s – literally named – Flat Floor Facility at the Marshall Spaceflight Center in Huntsville Alabama.

Future - What can a lemon tell you about your personality? Do you think you’re an extravert or an introvert? 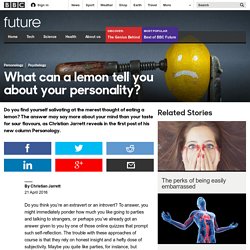 To answer, you might immediately ponder how much you like going to parties and talking to strangers, or perhaps you’ve already got an answer given to you by one of those online quizzes that prompt such self-reflection. The trouble with these approaches of course is that they rely on honest insight and a hefty dose of subjectivity. Maybe you quite like parties, for instance, but nowhere near as much your best friend – does that make you an extravert or not? A completely different approach that gets round these problems involves using a lemon – more specifically, concentrated lemon juice.

This is a test with a long history in personality psychology and it’s really easy to try out at home. How big data is helping us understand mental illness.