3.6 - If Your Boss Could Do Your Job, You’re More Likely to Be Happy at Work. “People don’t quit bad jobs, they quit bad bosses,” according to an old saw. 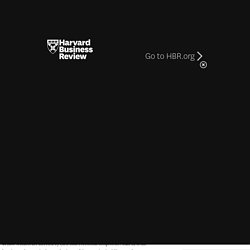 Our research suggests there’s truth behind this saying: bosses matter far more for employee job satisfaction than any other factor we measured. But what makes someone a great boss? Studies of leaders often focus on their style or charisma, but we wanted to look at how workers are affected by their boss’s technical competence. That is, is the boss is a real expert in the core business of the organization?

How much expertise does he or she have? Whether the supervisor could, if necessary, do the employee’s job. Using these three measures of supervisor competence, we found that employees are far happier when they are led by people with deep expertise in the core activity of the business. Research into the topic of expert leadership is recent but burgeoning. In our project, we studied 35,000 randomly selected employees and workplaces. When we look closely at the data, a striking pattern emerges.

3.6.5 Unions into Schools. 3.6.4 - Marginal gains: Nutritional revolution at Liverpool FC. Had Klopp detailed exactly what she had been hired to do, they might have been skeptical. 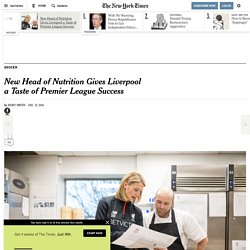 Nemmer’s plans — for individualized, scientifically planned diets, for food sourced as locally and as organically as possible, for four compulsory meals a day and even for cooking lessons — would have been revelatory even to seasoned pros, far in advance of what most soccer clubs offer. Photo He did not need to go into all of that, though. The food had done his job for him. A couple of days of Nemmer’s meals were all the recommendation his players needed. Six months into her new job, Nemmer, regarded within the club as one of Klopp’s biggest summer signings, is far too modest to claim much credit for her part in third-place Liverpool’s blistering start to the season. She certainly does not regard herself as a guru. Her colleagues, though, are more forthcoming. 3.6.4 - Motivating the Workforce. None of those accounts are wholly satisfactory, of course; none offer a full picture of Chelsea’s eye-catching reversal. 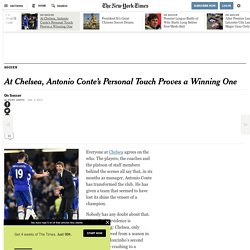 But neither are any of them wrong. Conte has turned around Chelsea not with one grand gesture but with countless small ones. Only Pedro erred slightly: Whatever Conte has done, it most certainly has not been easy. Conte’s work as Chelsea’s manager started long before his first day in the job. In April, after he had accepted the Chelsea job but while he was still preparing Italy for the summer’s European Championship, he made a number of brief visits to London on his days off. He visited Cobham — Chelsea’s training center, in a well-heeled, cosseted corner of Surrey — to speak with players, asking them if they wanted to remain at the club and detailing his plans for the season ahead.

3.6.4 Government review to order zero-hours contracts overhaul. Image copyright Getty Images The government-commissioned inquiry into controversial working practices is set to call for employees on zero-hours contracts to be given the right to request a move onto fixed hours. 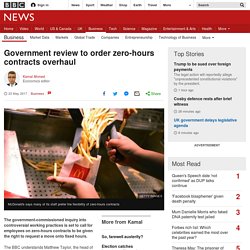 The BBC understands Matthew Taylor, the head of the Royal Society of Arts who is leading the inquiry, will say that some workers might be being exploited by businesses. The "right to request" fixed hours will be similar to the present right to request flexible hours - after having a child for example. Employers would have to respond "seriously" to the request and give reasons for their decision. The move comes as the employers group, the Confederation of British Industry, revealed it backed the idea. In its submission to the Taylor review, the CBI also said that all employees should have their terms and conditions set out in a written statement. Flexibility 'appreciated' 3.6.4 Designing a Motivating Work Environment. 3.6.3 Top tier recruitment policy for Amazon. 3.6.3 Sophi Tranchell on the importance of external recruitment. 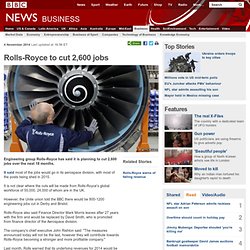 It said most of the jobs would go in its aerospace division, with most of the posts being shed in 2015. It is not clear where the cuts will be made from Rolls-Royce's global workforce of 55,000, 24,000 of whom are in the UK. However, the Unite union told the BBC there would be 800-1200 engineering jobs cut in Derby and Bristol. Rolls-Royce also said Finance Director Mark Morris leaves after 27 years with the firm and would be replaced by David Smith, who is promoted from finance director of the Aerospace division. The company's chief executive John Rishton said: "The measures announced today will not be the last, however they will contribute towards Rolls-Royce becoming a stronger and more profitable company.

" Last month, Rolls warned that its underlying revenues for 2014 would be 3.5-to-4% lower than expected. Analysis: Kamal Ahmed, BBC business editor. 3.6.2 Why is there a shortage of workers in agriculture? 3.6.1 Training staff to meet customer expectations.