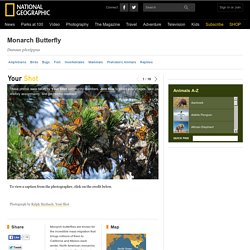 North American monarchs are the only butterflies that make such a massive journey—up to 3,000 miles (4,828 kilometers). The insects must begin this journey each fall ahead of cold weather, which will kill them if they tarry too long. Monarch butterflies begin life as eggs and hatch as larvae that eat their eggshells and, subsequently, the milkweed plants on which they were placed. (Monarchs are dependent on milkweed plants, which larvae eat nearly exclusively.) Fattening larvae become juicy, colorful caterpillars, then create a hard protective case around themselves as they enter the pupa stage. Butterflies that emerge from chrysalides (pupa state) in late summer and early fall are different from those that do so during the longer days and warmer weather of summer. Monarch butterfly.

The monarch butterfly (Danaus plexippus) is a milkweed butterfly (subfamily Danainae) in the family Nymphalidae. 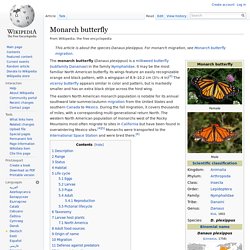 It may be the most familiar North American butterfly. Its wings feature an easily recognizable orange and black pattern, with a wingspan of 8.9–10.2 cm (3½–4 in)[3] The viceroy butterfly appears similar in color and pattern, but is markedly smaller and has an extra black stripe across the hind wing. The eastern North American monarch population is notable for its annual southward late-summer/autumn migration from the United States and southern Canada to Mexico. During the fall migration, it covers thousands of miles, with a corresponding multi-generational return North. The western North American population of monarchs west of the Rocky Mountains most often migrate to sites in California but have been found in overwintering Mexico sites.[4][5] Monarchs were transported to the International Space Station and were bred there.[6] Monarch Butterfly Site: Life Cycle, Migration, Pictures, News, More! Exploring Nature Educational Resource. Return to the Life Cycles - Plants & Animals Index. 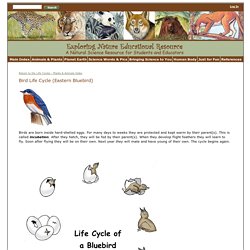 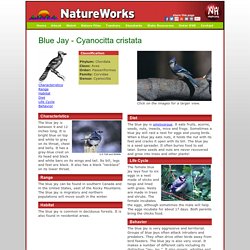 It eats fruits, acorns, seeds, nuts, insects, mice and frogs. Sometimes a blue jay will raid a nest for eggs and young birds. When a blue jay eats nuts, it holds the nut with its feet and cracks it open with its bill. The blue jay is a seed spreader. Life Cycle The female blue jay lays four to six eggs in a nest made of sticks and twigs and lined with grass. Animal Life Cycles. © Contributed by Leanne Guenther Animals that Grow Up (Simple Life Cycle): Most animals including fish, mammals, reptiles and birds have very simple life cycles: 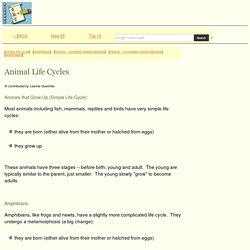 Before It's Too Late - Croaking Frogs. Glass Frogs: Crystals of the Rainforest. New species of glass frog has transparent skin and Kermit's eyes. Hyalinobatrachium dianae was found in the mountains of east Costa RicaIt's lime-coloured on top but has translucent skin on its underside Glass frog has a distinctive mating call that resembles a tin whistleDistinguished from other glass frogs by its eyes, which look like Kermit's By Sarah Griffiths for MailOnline Published: 15:52 GMT, 17 April 2015 | Updated: 20:58 GMT, 17 April 2015 A new species of glass frog has been discovered with translucent skin so you can see its insides. 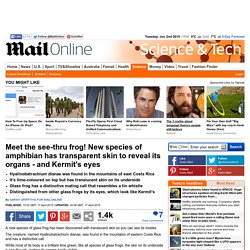 The creature, named Hyalinobatrachium dianae, was found in the mountains of eastern Costa Rica and has a distinctive call. New Species of See-Through Frog Found, Looks Like Kermit. Calling all Muppets fans: A new species of see-through glass frog found in Costa Rica looks just like Kermit. 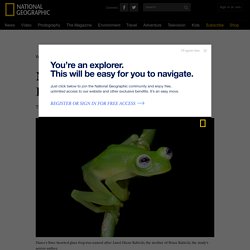 The lime-green amphibian, which took the Internet by storm this week, has bulging white eyes with perfect black pupils, much like Jim Henson's musical puppet. (Also see "See-Through Frogs With Green Bones Discovered in Peru. ") But this frog can't carry a tune. In fact, it has a long whistle like that of an insect, which, according to a new study, may be why scientists didn't notice it for so long—Costa Rica's last glass frog discovery occurred in 1973. Dubbed Diane's Bare-hearted glass frog (Hyalinobatrachium dianae), the inch-long (2.5 centimeter) amphibian is described February 19 in the journal Zootaxa. Frozen Frogs. PBS Airdate: April 1, 2005 ROBERT KRULWICH: Well, as we all know, it is finally springtime. 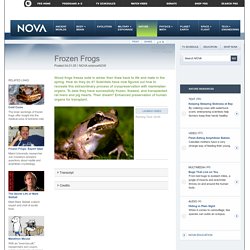 So before we go, I wanted to celebrate the season. And I can think of no better way than to introduce you to a creature who is, again, very, very small, and lives down here somewhere, close to the ground, doing things that I think you will find very surprising. Here's the thing about North American wood frogs. They're small... JOHN COSTANZO: So it might be difficult to spot a frog.

Blue Jay, Life History, All About Birds - Cornell Lab of Ornithology. Ground Forager This common, large songbird is familiar to many people, with its perky crest; blue, white, gray, and black plumage; and noisy calls. 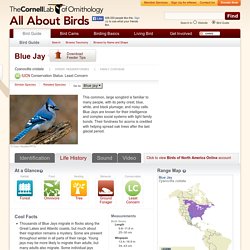 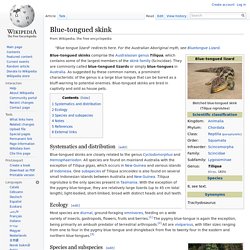 For the Australian Aboriginal myth, see Bluetongue Lizard. Systematics and distribution[edit] Blue-tongued skinks are closely related to the genus Cyclodomorphus and Hemisphaeriodon. All species are found on mainland Australia with the exception of Tiliqua gigas, which occurs in New Guinea and various islands of Indonesia. One subspecies of Tiliqua scincoides is also found on several small Indonesian islands between Australia and New Guinea.

Ecology[edit] 15 Most Venomous Snakes in the World. Daboia russelii, the deadly Russell's Pit-viper. Two Russell’s vipers resting between shed leaves. Family Viperidae (true vipers) True vipers can be distinguished from pitvipers by the absence of a heat-sensing pit-organ and some other features. Like the pitvipers, they have long tubular fangs, but no other teeth on the short maxillary bone. During a strike, the latter is rotated through an angle of about 90 degrees, swinging the fangs from a horizontal to a vertical position. Russell's viper. Click anywhere inside the article to add text or insert superscripts, subscripts, and special characters. You can also highlight a section and use the tools in this bar to modify existing content: We welcome suggested improvements to any of our articles.

You can make it easier for us to review and, hopefully, publish your contribution by keeping a few points in mind: Encyclopaedia Britannica articles are written in a neutral, objective tone for a general audience. You may find it helpful to search within the site to see how similar or related subjects are covered. Any text you add should be original, not copied from other sources. Russell's Viper - world's most lethal snake. Its name is identical to the herpetologist who published the first description of it in a scientific journal in the 18th century. In India the Russel's Viper is responsible for many fatalities and they call it Daboia. It is a fast and vicious snake. It can reach a length of about five feet. Daboia. Russell's Viper (Daboia russelli) in a sensing moment Daboia are commonly known as Russell's viper and chain viper, among other names.[5][6] Description[edit] Russell's viper in Pune Zoo This snake can grow to a maximum total length (body + tail) of 166 cm (5.5 ft) and averages about 120 cm (4 ft) on mainland Asian populations, although island populations do not attain this size.[5] It is more slenderly built than most other vipers.[7] Ditmars (1937) reported the following dimensions for a "fair sized adult specimen":[8]

The Leisurely Life of Spider Monkeys. Spider Monkeys, Spider Monkey Pictures, Spider Monkey Facts. Spider monkeys (of several species) live in the tropical rain forests of Central and South America and occur as far north as Mexico. They have long, lanky arms and prehensile (gripping) tails that enable them to move gracefully from branch to branch and tree to tree. These nimble monkeys spend most of their time aloft, and maintain a powerful grip on branches even though they have no thumbs. These New World primates are social and gather in groups of up to two- or three-dozen animals. Why Sharks Attack. Why Sharks Attack. Lethal Seas. Sally Ingleton. Big Four of india ( Most venomous snakes of India ) and their venom extraction for making polyvalent. 15 Most Venomous Snakes in the World. KRAIT SNAKE: THE NOCTURNAL NINJA KILLER. India's feared snake no. 1 - the Krait. The Jungle Book by Rudyard Kipling features the well-known story ofRikki-Tikki-Tavi, where a krait threatens a boy but is defeated by a mongoose.

The story takes place in India, where kraits (Bungarus spp.) are common. The common krait, Bungarus caeruleus is a relatively small (3 foot) venomous snake and one of the most venomous snakes in India. Kraits have colors ranging from black to grey with white stripes that are more prominent on the lower part of the body. Kraits can be found in a number of habitats. Common krait. Description[edit] The average length is 0.9 m (3.0 ft), but they can grow to 1.75 m (5 ft 9 in).[1] Males are longer, with proportionately longer tails.

The head is flat and the neck hardly evident. Animals for Kids: Blue and Yellow Macaw Bird. Back to Animals for Kids The Blue and Yellow Macaw is a type of Parrot with the scientific name Ara ararauna. It gets its nickname from its beautiful bright yellow and blue feathers. Macaws, Macaw Pictures, Macaw Facts - National Geographic. Scarlet Macaw. Macaw documentary part 3.flv. Scarlet Macaws - Costa Rica. Parrots - Look Who's Talking [THE COMPLETE DOCUMENTARY] Parrots: Majestic Birds (Nature Documentary) Little Einsteins - Blue Footed Booby Bird Ballet - SUBSCRIBE. What in the World is a Blue Footed Booby? Dance of the Blue-Footed Booby. Blue-footed Booby, Life History, All About Birds - Cornell Lab of Ornithology. Blue-footed Booby, Identification, All About Birds - Cornell Lab of Ornithology.