Amazing Creatures of the Deep Ocean HD. The Life Cycle of a Frog. Life Cycle of frogs. The Egg Frogs lay their eggs in water or wet places. 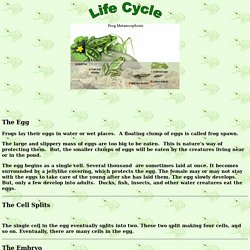 A floating clump of eggs is called frog spawn. The large and slippery mass of eggs are too big to be eaten. This is nature's way of protecting them. But, the smaller clumps of eggs will be eaten by the creatures living near or in the pond. The egg begins as a single cell. The Cell Splits The single cell in the egg eventually splits into two. The Embryo The mass of cells in the egg come to form an embryo. The Tadpole After its 21 day development period, the embryo leaves its jelly shell, and attaches itself to a weed in the water. The tadpole has a long tail, and lives in the water. 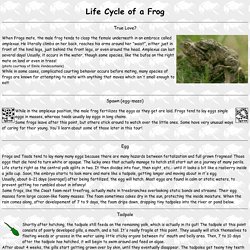 When Frogs mate, the male frog tends to clasp the female underneath in an embrace called amplexus. He literally climbs on her back, reaches his arms around her "waist", either just in front of the hind legs, just behind the front legs, or even around the head. Amplexus can last several days! Usually, it occurs in the water, though some species, like the bufos on the right mate on land or even in trees! (photo courtesy of Emile Vandecasteele) While in some cases, complicated courting behavior occurs before mating, many species of frogs are known for attempting to mate with anything that moves which isn't small enough to eat! Spawn (egg-mass) While in the amplexus position, the male frog fertilizes the eggs as they get are laid. Egg Frogs and Toads tend to lay many many eggs because there are many hazards between fertalization and full grown frogness! Tadpole. Reef Life of the Andaman (full marine biology documentary)

Glass frog Facts. Glass Frog, Costa Rica - information, where to see it, and photos. HabitatThis glass frog lives near rapid streams, both in cleared areas as well as the canopy level of trees. 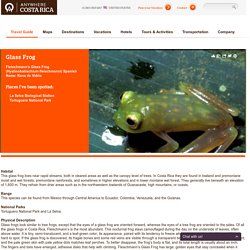 In Costa Rica they are found in lowland and premontane moist and wet forests, premontane rainforests, and sometimes in higher elevations and in lower montane wet forest. They generally live beneath an elevation of 1,600 m. They refrain from drier areas such as in the northwestern lowlands of Guanacaste, high mountains, or coasts. RangeThis species can be found from Mexico through Central America to Ecuador, Colombia, Venezuela, and the Guianas.

National ParksTortuguero National Park and La Selva. Physical Description Glass frogs look similar to tree frogs, except that the eyes of a glass frog are oriented forward, whereas the eyes of a tree frog are oriented to the sides. Biology and Natural HistoryMore than 100 species of glass frogs live throughout Central and South America. Males are not tentative though, especially not with their territories. Glass frogs, the beautiful transparent frogs from the amazon. The Glass frog is a beautiful frog species that has a semi-transparent skin Among the many weird and fascinating amphibians on our planet, very special are the Glass Frogs. 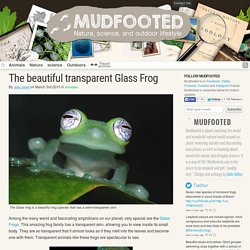 This amazing frog family has a transparent skin, allowing you to view inside its small body. They are so transparent that it almost looks as if they melt into the leaves and become one with them. Transparent animals like these frogs are spectacular to see. A glass frog allows you to see its internal organs Glass frogs live in and among the trees and plants of humid mountain forests in Central and South America. Glass frogs and their eggs. During the breeding season they live along rivers and streams where they lay their eggs on leaves that overhang the water. Conservationists are especially interested in these beautiful frogs because they may be good bioindicators. Glass frogs have a lime green skin that is semitransparent, allowing you to peek inside their body. Glass Frogs. Last Updated: Jan 03, 2013 Nature's original X-ray machine, the Fleischmann's glass frog has a transparent underbelly that reveals a complex web of veins, organs and tiny white bones. 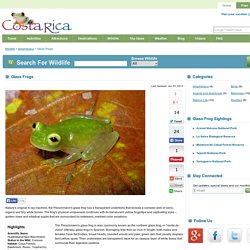