The Arctic (cooler than a polar bear's toenails)

Ice melt endangers Arctic mammals. The narwhal, beluga and bowhead whales, the ringed, bearded, spotted, ribbon, harp and hooded seals, the walrus, and the polar bear are 'particularly vulnerable due to their dependence on sea ice.' 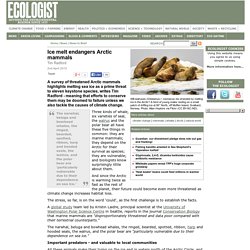 A second giant blob of Antarctic ice is getting ready to drown us. Remember when we found out last year that the West Antarctic ice sheet had started to collapse, that the collapse more or less can’t be stopped, and that it will eventually result in 10 to 15 feet of sea-level rise? 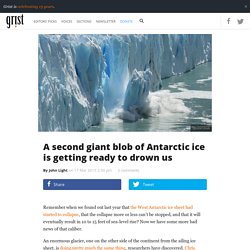 Now we have some more bad news of that caliber. An enormous glacier, one on the other side of the continent from the ailing ice sheet, is doing pretty much the same thing, researchers have discovered. Record ice low could quicken Arctic thaw. West Antarctic melt rate has tripled: UC Irvine-NASA. Berkeley Lab Scientists ID New Driver Behind Arctic Warming. 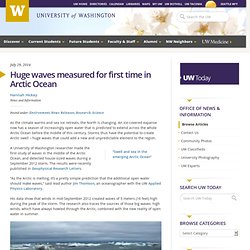 Virginia Institute of Marine Science - Study reveals strong links between Antarctic climate, food web. A long-term study of the links between climate and marine life along the rapidly warming West Antarctic Peninsula reveals how changes in physical factors such as wind speed and sea-ice cover send ripples up the food chain, with impacts on everything from single-celled algae to penguins. 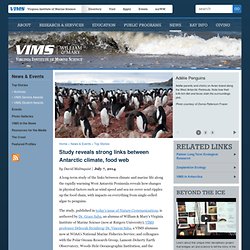 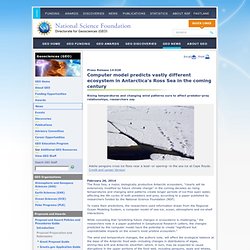 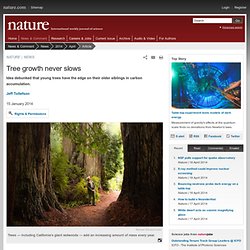 Many foresters have long assumed that trees gradually lose their vigour as they mature, but a new analysis suggests that the larger a tree gets, the more kilos of carbon it puts on each year. Global warming could upset Antarctic food chain. Resting near the bottom of the food chain, Antarctic krill (Euphausia superba) underpin much of the Southern Ocean's ecosystem. 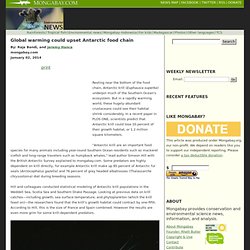 But in a rapidly warming world, these hugely-abundant crustaceans could see their habitat shrink considerably. In a recent paper in PLOS ONE, scientists predict that Antarctic krill could lose 20 percent of their growth habitat, or 1.2 million square kilometers. "Antarctic krill are an important food species for many animals including year-round Southern Ocean residents such as mackerel icefish and long-range travelers such as humpback whales," lead author Simeon Hill with the British Antarctic Survey explained to mongabay.com. Some predators are highly dependent on krill directly, for example Antarctic krill make up 85 percent of Antarctic fur seals (Arctocephalus gazella) and 76 percent of grey headed albatrosses (Thalassarche chrysostoma) diet during breeding seasons. 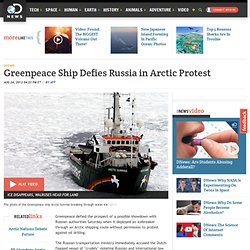 The Russian transportation ministry immediately accused the Dutch-flagged vessel of "crudely" violating Russian and international law. Earlier this week Greenpeace said Russia had refused the permission to enter the Northern Sea Route on several occasions citing concerns about the icebreaker's ability to withstand thick ice. PHOTOS: Devastating Oil Spill Disasters. Beneath Greenland's ice, a grand canyon. A 460-mile canyon up to half a mile deep lies beneath Greenland's iceThe discovery was reported in a scientific journal Thursday"It looks like it was a pretty extensive river system millions of years ago," scientist says (CNN) -- British and American scientists watching Greenland's massive ice sheet have found what appears to be a 460-mile "megacanyon" far beneath the frozen surface of the world's largest island. 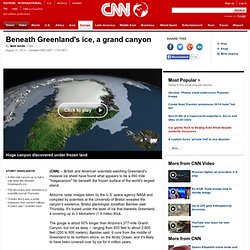 Airborne radar images taken by the U.S. space agency NASA and compiled by scientists at the University of Bristol revealed the canyon's existence, Bristol glaciologist Jonathan Bamber said Thursday. It's buried under the layer of ice that blankets Greenland, a covering up to 3 kilometers (1.9 miles) thick. The gouge is about 50% longer than Arizona's 277-mile Grand Canyon, but not as deep -- ranging from 650 feet to about 2,600 feet (200 to 800 meters), Bamber said. "It's a continuous canyon. "We're used to change,'' said Greenlander Pilu Neilsen. Why 2012 Was a Bad Year for the Arctic and All of Us. During 2012, the Arctic broke several climate records, including a level of unprecedented warmth that created rapid ice loss. 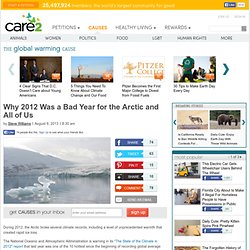 The National Oceanic and Atmospheric Administration is warning in its “The State of the Climate in 2012″ report that last year was one of the 10 hottest since the beginning of recording global average temperatures. In addition to this, Arctic sea ice melted to reach record lows during the annual summer thaw. To illustrate this, the report points out that in Greenland, around 97% of the region’s ice sheet melted: this a figure that is four times the expected figure based on the melt in previous years. We’re still feeling the effects of this and continued warming today, with the North Pole Environmental Agency issuing a warning that the summer ice has melted so fast and by so much that a shallow lake has formed. Also, greenhouse gas emissions rose to worrying levels. Shell suspends Arctic oil drilling for the year. Royal Dutch Shell announced today that it was setting "pause" on its exploratory drilling activities in the Arctic for 2013.

Shell's operations are currently under review by the federal government after the oil company suffered numerous setbacks during last year's opening attempt to drill exploratory wells in the Beaufort and Chukchi Seas, including running its drilling rig aground on Sitkalidak Island in southern Alaska in late December. "We've made progress in Alaska, but this is a long-term program that we are pursuing in a safe and measured way," said the director of Shell's Upstream Americas, Marvin Odum. If You Think Climate Change Is Boring, Watch This Video. Study Sheds New Light on Arctic Sea Ice Volume Losses. Deep ice cores show past Greenland warm period may be ‘road map’ for continued warming of planet.

A new study by an international team of scientists analyzing ice cores from the Greenland ice sheet going back in time more than 100,000 years indicates the last interglacial period may be a good analog for where the planet is headed in terms of increasing greenhouse gases and rising temperatures. The new results from the NEEM deep ice core drilling project led by the University of Copenhagen and involving the University of Colorado Boulder show that between 130,000 and 115,000 years ago during the Eemian interglacial period, the climate in north Greenland rose to about 14 degrees Fahrenheit warmer than today. Climate events drive High-Arctic vertebrate community into synchrony: Extreme weather potent force for Arctic overwintering populations. Climate change is known to affect the population dynamics of single species, such as reindeer or caribou, but the effect of climate at the community level has been much more difficult to document.

Now, a group of Norwegian scientists has found that extreme climate events cause synchronized population fluctuations among all vertebrate species in a relatively simple high arctic community. These findings may be a bellwether of the radical changes in ecosystem stability that could result from anticipated future increases in extreme events. The findings are published in the 18 January issue of Science. 8 Reasons Why Shell Can’t be Trusted in the Arctic. Chasing down the world's vanishing glaciers. Birthday Canyon, Greenland Ice Sheet, Greenland, June 2009. Courtesy of James Balog EIS time lapse cameras at Columbia Glacier, Alaska, Aug 2009.

"I never really expected to see this magnitude of change. Strawberries....from Greenland? I don't want to go to bed thinking about strawberries growing in Greenland I don't want to see neat little rows of budding lettuce plants growing outside a polytunnel. OUTSIDE a polytunnel; over-wintering under the snow but come the Spring, still alive and sprouting new shoots; cabbage and potatoes to follow.

And I don't want to hear a Greenlander livestock farmer telling me that (once again, thanks to Global Warming) he now has enough newly ice-free pasture land to double the size of his 20,000-strong flock of sheep. None of this is what I want to hear or see. Two new emperor penguin colonies in Antarctica. ScienceDaily (Nov. 8, 2012) — While about 2500 chicks of emperor penguins are raised this year at the colony close to the French Dumont d'Urville Station, two new colonies totalling 6000 chicks have just been observed about 250 km away, near Mertz Glacier by the scientists Dr André Ancel and Dr Yvon Ancel, from the Institut Pluridisciplinaire Hubert Curien in Strasbourg (CNRS and Université de Strasbourg).

Probe of Antarctica's hidden lakes may yield clues to extraterrestrial life. A British team of scientists is leading an effort to drill down to a subglacial lake deep below Antarctica's frozen wilderness. News Story - Scientists discover new mechanism at work breaking-up icebergs. Date: 29 Oct 2012 Findings to be featured on BBC Two series Operation Iceberg airing this week. Will we need to pull carbon out of the atmosphere to save ourselves? Arctic expert predicts final collapse of sea ice within four years. Prof Peter Wadhams calls for “urgent” consideration of new ideas to reduce global temperatures. Photograph: John Mcconnico/AP. Paleoclimatology Program - Perspective on Abrupt climate Change.

Arctic Microbes Sleep for 100 Million Years. Heat-loving bugs at the bottom of the Arctic Ocean may spend a hundred million years waiting for things to warm up, according to a new study. As Arctic Sea Ice Melts Thanks to Climate Change, Drilling for Oil. Dear Mr. President: Why on Earth Are You Letting Shell Drill in the Arctic? Agulhas Current is said to attenuate the effect of melting ice. Why The Arctic Sea Ice Death Spiral Matters.