Cookies are Not Accepted - New York Times. What if Uber kills off public transport rather than cars? L’école 42 sacrée meilleure école de code du monde - Le Figaro Etudiant. Mark Zuckerberg's 2017 plan to visit all US states hints at political ambitions. Mark Zuckerberg has given more weight to the idea that he could move into politics with the announcement of a statesmanly personal challenge for 2017. 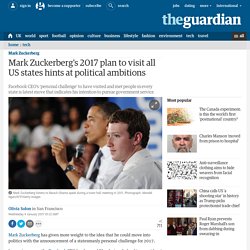 In previous years the Facebook CEO has learned Mandarin, pledged to run at least a mile each day and built a virtual assistant called Jarvis to control his home. This year he wants to have visited and met people in every state in the US. He’s already visited about 20 states, which means he has to travel to about 30 states by the end of the year. Germans Can Now Pay For A Subway Ticket By Watching Ads On Their Phones. If the internet is as least partially to blame for the degree of political division between Americans now—with the filter bubble of social media screening out opposing viewpoints via algorithm, and amplifying existing beliefs—maybe it makes sense that the solution might be offline. 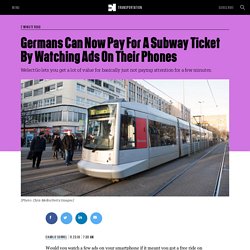 One new project aims to reconnect Americans the old-fashioned way—as pen pals. Pens Plus Pals, a pen pal matching service, is linking conservatives and liberals in an attempt to build understanding through its Red Plus Blue project. Forbes Welcome. Brazil looks at Blockchain for citizen participation. A Brazilian research institute is building a voting platform on Blockchain, to gather the public to participate in government decisions and policy-making. 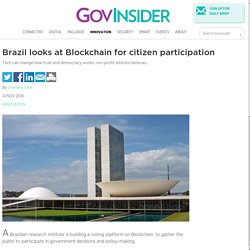 Blockchain is a digital platform that records transactions in real time and distributes the data across a network of computers. This feature has made it foolproof to hacks, as records once made, are immutable. ITS Rio, a non-profit think tank, is currently building a voting system using Blockchain for the Brazilian government. The platform will gather digital signatures and link them directly to voters’ unique identification numbers. 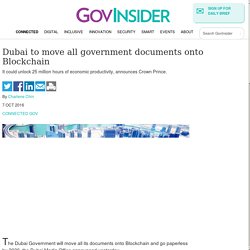 Blockchain is a digital ledger that is held across a distributed network of computers. Records are logged in real-time and are irreversible. “The strategy aims to make life and work easier for people in Dubai; users will only need to enter personal data or business credentials once”, tweeted Hamdan bin Mohammed, the Crown Prince of Dubai. “The Dubai Blockchain Strategy also aims to unlock 25 million hours of economic productivity annually in saved document processing time”, he added. In February, Dubai’s Museum of the Future Foundation – the country’s innovation incubator – first established a “Global Blockchain Council” among private firms, government agencies and startups to research the potentials of the technology. Entire Singapore Public Service to use Facebook for Work in 2017 - Peter Ong. Radical Realism About Climate Change by Lili Fuhr. BERLIN – Mainstream politics, by definition, is ill equipped to imagine fundamental change. 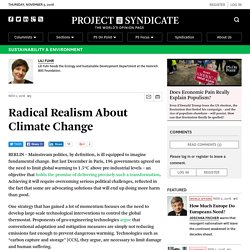 But last December in Paris, 196 governments agreed on the need to limit global warming to 1.5°C above pre-industrial levels – an objective that holds the promise of delivering precisely such a transformation. Achieving it will require overcoming serious political challenges, reflected in the fact that some are advocating solutions that will end up doing more harm than good. One strategy that has gained a lot of momentum focuses on the need to develop large-scale technological interventions to control the global thermostat. Proponents of geo-engineering technologies argue that conventional adaptation and mitigation measures are simply not reducing emissions fast enough to prevent dangerous warming. Technologies such as “carbon capture and storage” (CCS), they argue, are necessary to limit damage and human suffering. Does Economic Pain Really Explain Populism? Les facteurs vont aussi s'occuper des personnes âgées. La Poste lance son offre d'aide aux seniors «Veiller sur mes parents», accélérant ainsi son virage dans les services à la personne. 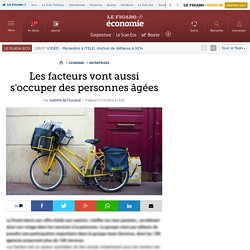 Cognitive Computing and Government Social Programs: Bridging the gap between data quantity and data insights. Singapore to use intelligent 'chatbots' to deliver public service. Singapore has announced a new partnership with Microsoft to create a digital government services platform that will shift towards conversational computing. 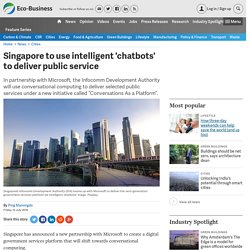 Researchers Confront an Epidemic of Loneliness. Untitled. Soonsoonsoon. The Pokemon Go Effect: Why Augmented Reality Is Finally Taking Hold in Government. Basketball was pretty lame when it started out. 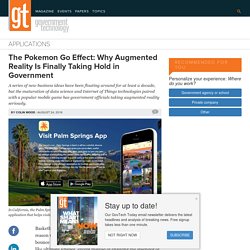 Half of the reason was the rules — players used a soccer ball, which didn’t bounce well, and they weren’t allowed to dribble. It was sort of like ultimate Frisbee, except instead of enjoying the splendor of nature, they played in a big room that smelled like armpits. The False Economic Promise of Global Governance by Dani Rodrik. CAMBRIDGE – Global governance is the mantra of our era’s elite. 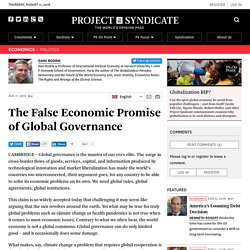 The surge in cross-border flows of goods, services, capital, and information produced by technological innovation and market liberalization has made the world’s countries too interconnected, their argument goes, for any country to be able to solve its economic problems on its own. We need global rules, global agreements, global institutions. This claim is so widely accepted today that challenging it may seem like arguing that the sun revolves around the earth. Yet what may be true for truly global problems such as climate change or health pandemics is not true when it comes to most economic issues.

Can robots help us navigate the complex world of public services? A few months ago, the Guardian reported on the story of 19 year old Joshua Browder, who had created ‘the world’s first robot lawyer’ to help people appeal against parking fines. 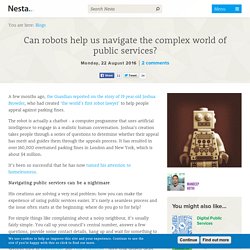 The robot is actually a chatbot - a computer programme that uses artificial intelligence to engage in a realistic human conversation. Joshua’s creation takes people through a series of questions to determine whether their appeal has merit and guides them through the appeals process. It has resulted in over 160,000 overturned parking fines in London and New York, which is about $4 million. It’s been so successful that he has now turned his attention to homelessness. Navigating public services can be a nightmare. Denver police (with the help of a tech company) create 3D image of killers face only using his DNA : Futurology. The biggest threat to democracy? Your social media feed.

Over the past two decades, the internet has rewired civil society in unprecedented ways, propelling collective action to a radically new level of citizen autonomy. Engineering Will Soon Be 'More Parenting Than Programming' "What's a crazy idea you believe in that others don't agree with? " Peter Diamandis posed this classic question (which originated with Peter Thiel) during an interview with Steve Jurvetson at Singularity University's first ever Global Summit. A successful venture capital investor, Jurvetson is known as someone with a keen ability to spot important technological trends before others catch on.

He was early investor in both Tesla and SpaceX as well as sitting on the boards of Synthetic Genomics, Planet Labs, and D-Wave, among other companies. Can cities be publicly traded? The Charging Bull, a Wall Street symbol (Credit: Epyonmx, Flickr Creative Commons) Apparently so. The city of Nashville can now be bought and sold on the New York Stock Exchange.

Could "Google Urbanism" Help Fund Public Space With A Cut Of Online Ad Dollars? If you're sitting in a public square and you see a location-based ad on your phone—nudging you to go in a local store—someone is making some money. But that company is a faceless behemoth many miles away, with no connection to the local business, neighborhood, and commerce that is making it money. So what if some of the ad revenue should go back to the public square itself? That's the proposal of a group of designers who call themselves "hybrid urbanists," working in both the urban and digital worlds. "We adapted a concept from the tech sector: the controversial idea that citizens are 'users' of the city, and as users their presence represents a 'resource' that is currently disproportionately tapped into by digital platforms such as Google or Facebook, at huge financial gains, but without any benefit for the original platform that hosts their activity—this being the city," says designer Nicolay Boyadjiev from the Strelka Institute for Media Architecture and Design.

The data revolution enables governments to radically improve quality of service. Imagining a new mindset: the Policy Designer. Chatbot offers free legal aid to the homeless. A Stanford undergrad's AI-based chatbot has already helped us with our parking tickets and various legal issues, but now his DoNotPay bot is taking on an even bigger, trickier issue. The New Science of Building Great Teams. Can We Meaningfully Improve Government With Experimentation?

The End of Globalization? The International Security Implications. Introducing Ulex: Towards Open Source Law for New Nations — Voice & Exit. Bringing data to urban governance. Centre for Public Impact. Hillary Clinton's new mobile app offers real-world rewards to her biggest supporters. Hillary Clinton might be namedropping Pokémon Go on the campaign trail, but she'll also be hoping her supporters have some smartphone battery left for another app — her own. Clinton supporters Hillary for America launched Hillary 2016 on the App Store last night, an app that offers daily challenges and quizzes to Clinton supporters, as well as providing digital and physical rewards to volunteers who help organize and canvas for the Democratic candidate. Mayor Bloomberg’s Geek Squad. The app developers trying to get Jill Stein elected president. A small community of programmers have started organizing across a range of platforms in order to get Jill Stein elected president of the United States.

In the future you will own nothing and have access to everything / Boing Boing. Theconversation. Exclusive: U.S. and Chinese labor groups collaborated before China Wal-Mart strikes. The Rebirth of the City-State — How We Get To Next. Directorate for Public Governance and Territorial Development. New Zealand Crowdfunds $1.7 Million To Buy A Private Beach And Give It To The Public.

Liquid Democracy: True Democracy for the 21st Century. « Pokemon Go », le jeu de réalité augmentée déjà très envahissant. République Numérique - La République numérique en actes. Digital democracy - where to next? Canada 2020 EN FINAL S. Rebuilding Public Trust: Open Government & Open Dialogue in the Government of Canada - Canada 2020. We Owe Most Of Our Greatest Tech To The Government, Here’s What It Should Do Next - BuzzFeed News. Good Judgment® Open. Good Judgment Project: How I became a superforecaster for the intelligence community.

Amazon. How Brexit and the Rise of Donald Trump Reflect the Changing Lines Between Left and Right on Both Sides of the Atlantic. Where Revolutions Begin. Why We Need Government to Evolve as Fast as Technology. Des tribunaux anglais vont utiliser la réalité virtuelle pour plonger les jurés au cœur de scènes de crime.