5 things you need to know about the global pension crisis. At what age are you planning to retire? 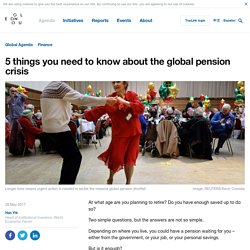 Do you have enough saved up to do so? Two simple questions, but the answers are not so simple. Depending on where you live, you could have a pension waiting for you – either from the government, or your job, or your personal savings. A new report from the World Economic Forum, We’ll Live to 100 – How Can We Afford It? Takes a closer look at the global pension crisis. 1. The chart below illustrates the retirement ages for the six countries with the largest pension systems. Retirement age for most of these countries is 65 (with Japan the exception, at age 60). When Your Best Friend Is Younger Than Your Daughter. Don’t Call Me a Millennial — I’m an Old Millennial.

There’s a sensation you get when you hear the name of a group you’re a member of. 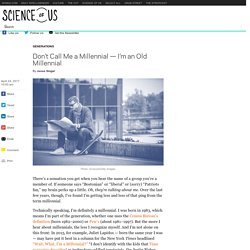 If someone says “Bostonian” or “liberal” or (sorry) “Patriots fan,” my brain perks up a little. Oh, they’re talking about me. Over the last few years, though, I’ve found I’m getting less and less of that ping from the term millennial. Technically speaking, I’m definitely a millennial. I was born in 1983, which means I’m part of the generation, whether one uses the Census Bureau’s definition (born 1982–2000) or Pew’s (about 1981–1997). VICE - Original reporting and documentaries on everything that matters in the world. Explicit cookie consent. Prof. David Sinclair - What Is Ageing? Why It Happens. Stem cell therapy reverses age-related osteoporosis in mice. Toronto, ON - Imagine telling a patient suffering from age-related (type-II) osteoporosis that a single injection of stem cells could restore their normal bone structure. 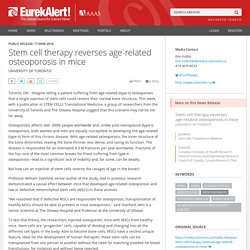 This week, with a publication in STEM CELLS Translational Medicine, a group of researchers from the University of Toronto and The Ottawa Hospital suggest that this scenario may not be too far away. Too Old for Sex? Not at This Nursing Home. But intimacy in nursing homes also raises questions about whether some residents can consent to sex.

Henry Rayhons, a former Iowa state legislator, was charged with sexual abuse in 2014 after being accused of having sex with his wife, who had severe Alzheimer’s disease and was in a nursing home. A jury found him not guilty. The Second Careers of the Healthy Elderly. You don’t take any medications?” 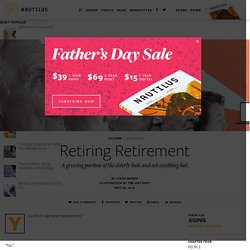 “No.” The doctor stared at me dolefully, then reframed the question. “So, when you get up in the morning, what do you put in your mouth?” He asked with an air of exasperation, as if I was the one who wasn’t getting it. If We Could Put King Solomon in an MRI Machine, Could We See the Wisdom in his Brain? At the 2010 Cannes Film Festival premiere of You Will Meet A Tall Dark Stranger, director Woody Allen was asked about aging. 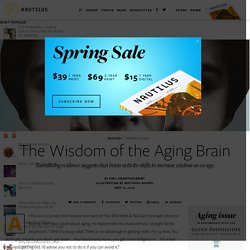 He replied with his characteristic, straight-faced pessimism. “I find it a lousy deal. Designing housing to build companionship in later life - Demos. How Jellyfish, Nanobots, and Naked Mole Rats Could Make Humans Immortal. All photos by Chris Bethell except when noted Dr. 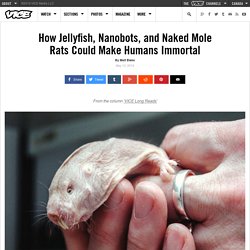 Chris Faulkes is standing in his laboratory, tenderly caressing what looks like a penis. It's not his penis, nor mine, and it's definitely not that of the only other man in the room, VICE photographer Chris Bethell. But at four inches long with shrivelled skin that's veiny and loose, it looks very penis-y. Then, with a sudden squeak, it squirms in his hand as if trying to break free, revealing an enormous set of Bugs Bunny teeth protruding from the tip. En Chine, vous pouvez expérimenter…la mort. Cirque du Soleil founder wants to breathe new life into how we honour the dead. MONTREAL―What could an encore possibly entail for a man who has reinvented the modern circus, travelled to space and banked a few billion dollars? 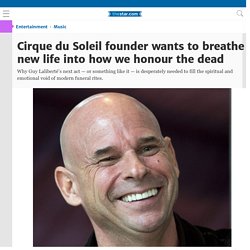 This Company Wants To Turn You Into A Tree When You Die. Conscious Aging Alliance. Novescence June 2014. Grandparental leave introduced in the UK. The Conservative Government in the United Kingdom has extended its policy for parental leave to include working grandparents, starting in October 2015. 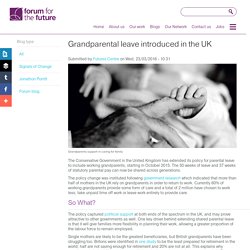 The 50 weeks of leave and 37 weeks of statutory parental pay can now be shared across generations. The policy change was instituted following government research which indicated that more than half of mothers in the UK rely on grandparents in order to return to work. Currently 60% of working grandparents provide some form of care and a total of 2 million have chosen to work less, take unpaid time off work or leave work entirely to provide care.

The policy captured political support at both ends of the spectrum in the UK, and may prove attractive to other governments as well. One key driver behind extending shared parental leave is that it will give families more flexibility in planning their work, allowing a greater proportion of the labour force to remain employed. Dementia cases in the UK have gone down in the last 20 years. The number of people in the UK who get dementia each year may be decreasing, a trend that breaks with many researchers' predictions. 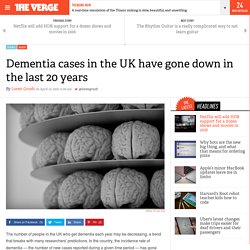 In the country, the incidence rate of dementia — the number of new cases reported during a given time period — has gone down by 20 percent since the 1990s, according to a new paper in Nature Communications. It suggests that today's aging population may not be as prone to cognitive problems as those of the past. Immortality Begins at Forty. I discovered something a couple of years ago: Almost all culture, old or new, is designed for consumption by people under 40. People between 40 and Ω (an indeterminate number defined as “really, just way too old”), are primarily employed as meaning-makers for the under-40 set. This is because they are mostly good for nothing else, and on average not valuable enough themselves for society to invest meaning in.

Fade to grey: why women should stop dyeing their hair. Almost 15 years ago, Anne Kreamer looked at a picture of herself, didn’t like her “brown helmet”, and stopped colouring her hair. She was a 46-year-old businesswoman working in the US. Her subsequent book was the chirpily titled Going Gray: How to Embrace Your Authentic Self With Grace and Style; she says it’s been liberating in every aspect of her life. “There are so many myths about going grey that, when you get through the undeniably difficult growing-out phase, you realise are total hogwash,” she says.

“About how you’ll look old. Future - Facebook is a growing and unstoppable digital graveyard. The day after my Aunt’s passing, I discovered she’d written me a lovely note on the front page of the Shakespeare collection she’d given me. “I know how important the written word is to you,” it read, “this then is my gift to you.” With all of my love, as always, Will spoiled boomers bankrupt the millennials? Probably not. Design Thinking Can Help Improve Care for the Elderly. A crisis in Vancouver: The lifeblood of the city is leaving. Watch This Hilarious Short Film About Escaping from an Old Folks' Home. À 60 ans, Yasmina Rossi est mannequin pour des maillots de bain (et sublime) MODE - Qui a dit qu'il y avait un âge limite pour faire du mannequinat et être belle en maillot de bain? Surtout pas la top modèle Yasmina Rossi, qui brise les préjugés et les règles du jeunisme en prouvant qu'on peut être la splendide égérie d'une marque, et tout ça à 60 ans.

What growing life expectancy gaps mean for the promise of Social Security. Smaller Share of Women Ages 65 and Older Are Living Alone. Why Baby Boomers Refuse To Retire. Even Transhumanist Elites Are Worried Only the Rich Will Be Able to Hack Death. Eldercare: The Crisis Facing America's Working Daughters. The Center for the Future of Aging. The future of ageing: it's time for marketers to stop being myopic about millennials. Service civique pour seniors : "Les retraités ont tout à y gagner" Craig Venter's new longevity startup will make "100 the new 60" 15% of American adults use online dating sites or mobile apps. A Mammal’s Brain Has Been Cryonically Preserved and Recovered. Un mannequin de 56 ans pour la première fois dans les pages de "Sports Illustrated" What the world's best cities will look like in 2030. Older Drivers Hit the Road for Uber and Lyft.