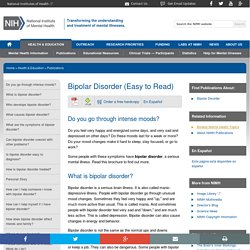 Do you feel very happy and energized some days, and very sad and depressed on other days? Do these moods last for a week or more? Medicating Mania. Transcript Question: Why did you finally turn to medication? 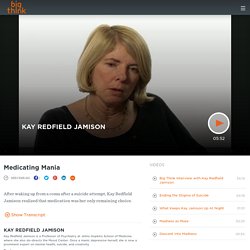 Kay Redfield Jamison: I, quite literally, woke up from a coma, from having tried to kill myself and it was very clear to me what my psychiatrist had been saying for years. The choice is not between a drug that has side effects or not, life is not ideal. Yes, your drug has side effects and yes if you don't take it you're going to die. And I—that had been clear to me, but there is something really crystal clear about actually nearly dying. Question: Could you have coped with manic depression if you hadn’t been a doctor? Kay Redfield Jamison: It's hard to say. Question: How do you identify manic depression?

Kay Redfield Jamison: Again, it's hard. So I think there is more education out there. Question: Are anti-depressants over-prescribed? Preventing Bipolar Disorder In High Risk People May Begin With Neuroplasticity, A Natural Rewiring Of The Brain. A family history of illness increases a person’s risk of developing bipolar disorder, yet many people at high genetic risk never develop this mental illness. 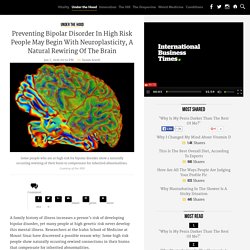 Researchers at the Icahn School of Medicine at Mount Sinai have discovered a possible reason why: Some high risk people show naturally occurring rewired connections in their brains that compensate for inherited abnormalities. "Our findings suggest that resilience to genetic risk of bipolar disorder may reflect the capacity to adapt network connectivity to ameliorate the effects of underlying network dysfunction," wrote the researchers. Someday, this new research suggests, neuroplasticity may become the basis for new and innovative treatments to help those who suffer from this often debilitating illness. Bipolar disorder, also known as manic-depressive illness, causes fluctuations in mood, energy, and activity levels, explain the researchers. In severe cases, patients may lose their ability to carry out day-to-day tasks. Big Think Interview with Kay Redfield Jamison. Transcript Question: What was your experience of living with your husband after his diagnosis? 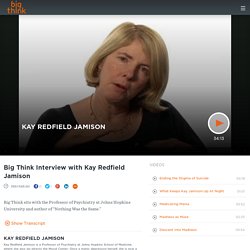 Kay Redfield Jamison: I think that one of the many advantages of death accruing over a long period of time, in the case of my husband and with many people who have cancer or other chronic illnesses, is that you do have time to meet a lot of other people who are going through similar situations and one of the great delights of our life actually was sitting around in labs waiting for the results of tests and talking to other people who were waiting to find out whether their cancer numbers were going in the right direction or not.

I think it makes you very aware of just the acute pain and anxiety that people do go through. What I had not been aware of and what I was very interested in writing about was how extraordinary grief is. I mean people talk about grief as if it's kind of an unremittingly awful thing, and it is. Translational Psychiatry - Connectomic markers of disease expression, genetic risk and resilience in bipolar disorder. Inherited sleep and activity traits linked to bipolar disorder identified. Representational Image. 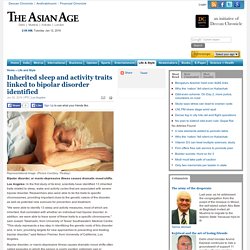 (Picture Courtesy: Pixabay) Bipolar disorder, or manic-depressive illness causes dramatic mood shifts. Los Angeles: In the first study of its kind, scientists have identified 13 inherited traits related to sleep, wake and activity cycles that are associated with severe bipolar disorder. Researchers also were able to tie the traits to specific chromosomes, providing important clues to the genetic nature of the disorder, as well as potential new avenues for prevention and treatment. Changes in brain connectivity protect against developing bipolar disorder. Naturally occurring changes in brain wiring can help patients at high genetic risk of developing bipolar disorder avert the onset of the illness, according to a new study led by researchers at the Icahn School of Medicine at Mount Sinai and published online today in the journal Translational Psychiatry. 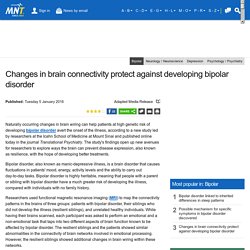 The study's findings open up new avenues for researchers to explore ways the brain can prevent disease expression, also known as resilience, with the hope of developing better treatments. Bipolar disorder, also known as manic-depressive illness, is a brain disorder that causes fluctuations in patients' mood, energy, activity levels and the ability to carry out day-to-day tasks. Possible mechanism for specific symptoms in bipolar disorder discovered. Researchers at Karolinska Institutet, and the Sahlgrenska Academy at Gothenburg University in Sweden have identified a gene variant linked to psychotic symptoms and cognitive impairment in people with bipolar disorder. 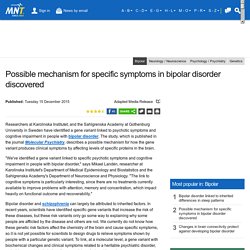 The study, which is published in the journal Molecular Psychiatry, describes a possible mechanism for how the gene variant produces clinical symptoms by affecting levels of specific proteins in the brain. Could protein levels help diagnose bipolar disorder? Protein levels may help assist in the diagnosis of bipolar disorder. 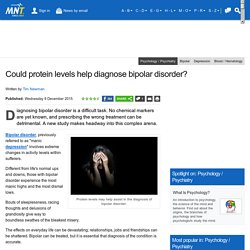 Bipolar disorder, previously referred to as "manic depression" involves extreme changes in activity levels within sufferers. Different from life's normal ups and downs, those with bipolar disorder experience the most manic highs and the most dismal lows. Bouts of sleeplessness, racing thoughts and delusions of grandiosity give way to boundless swathes of the bleakest misery. The effects on everyday life can be devastating; relationships, jobs and friendships can be shattered.

Bipolar can be treated, but it is essential that diagnosis of the condition is accurate.