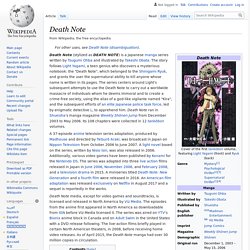 Misa makes a deal with Rem for Shinigami eyes, which allows her to kill knowing only the face at the cost of half her lifespan. Misa commits numerous murders, sends taped recordings to the police, and eventually uncovers Light's identity as the original Kira. Infatuated with Light, she demands Light be her boyfriend. Although he does not love Misa, Light agrees, intending to use Misa's Shinigami eyes to discern L's true name. Concepts[edit] The notebooks[edit] The core plot device of the story is the "Death Note" itself, a black notebook with instructions (known as "Rules of the Death Note") written on the inside. 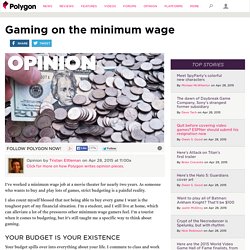 As someone who wants to buy and play lots of games, strict budgeting is a painful reality. I also count myself blessed that not being able to buy every game I want is the toughest part of my financial situation. I’m a student, and I still live at home, which can alleviate a lot of the pressures other minimum wage gamers feel. I’m a tourist when it comes to budgeting, but it’s still taught me a specific way to think about gaming. Your budget is your existence Your budget spills over into everything about your life. Many low-income gamers have to marginalize their hobby in order to pay for more important things, such as food and bills. Still, I struggle to stay current.

This is also the reason many low-income gamers stick to the AAA, annualized release schedule when they spend big money on a game. I find it hard to justify regular purchases of expensive games It's about completion, and value That’s not the case. Why Generation Y Yuppies Are Unhappy. Say hi to Lucy.

Lucy is part of Generation Y, the generation born between the late 1970s and the mid 1990s. She’s also part of a yuppie culture that makes up a large portion of Gen Y. I have a term for yuppies in the Gen Y age group—I call them Gen Y Protagonists & Special Yuppies, or GYPSYs. A GYPSY is a unique brand of yuppie, one who thinks they are the main character of a very special story. So Lucy’s enjoying her GYPSY life, and she’s very pleased to be Lucy. Lucy’s kind of unhappy. To get to the bottom of why, we need to define what makes someone happy or unhappy in the first place.

It’s pretty straightforward—when the reality of someone’s life is better than they had expected, they’re happy. To provide some context, let’s start by bringing Lucy’s parents into the discussion: Lucy’s parents were born in the 50s—they’re Baby Boomers. Lucy’s Depression Era grandparents were obsessed with economic security and raised her parents to build practical, secure careers. GYPSYs Are Delusional. 2002-09-11_paradox_dragon.jpg (JPEG Image, 940 × 455 pixels) J. 4 Multiplicities. 4 Others. Is Depression Just Bad Chemistry?

A commercial sponsored by Pfizer, the drug company that manufactures the antidepressant Zoloft, asserts, “While the cause [of depression] is unknown, depression may be related to an imbalance of natural chemicals between nerve cells in the brain. 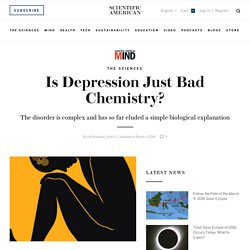 Prescription Zoloft works to correct this imbalance.” Using advertisements such as this one, pharmaceutical companies have widely promoted the idea that depression results from a chemical imbalance in the brain. The general idea is that a deficiency of certain neurotransmitters (chemical messengers) at synapses, or tiny gaps, between neurons interferes with the transmission of nerve impulses, causing or contributing to depression. One of these neurotransmitters, serotonin, has attracted the most attention, but many others, including norepinephrine and dopamine, have also been granted supporting roles in the story. Much of the general public seems to have accepted the chemical imbalance hypothesis uncritically. Are Your Chemicals out of Balance?