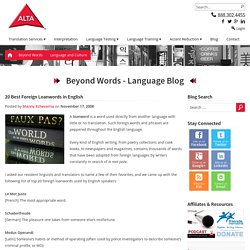 Such foreign words and phrases are peppered throughout the English language. Every kind of English writing, from poetry collections and cook books, to newspapers and magazines, contains thousands of words that have been adopted from foreign languages by writers constantly in search of le mot juste. I asked our resident linguists and translators to name a few of their favorites, and we came up with the following list of top 20 foreign loanwords used by English speakers: Le Mot Juste [French] The most appropriate word. Schadenfreude [German] The pleasure one takes from someone else’s misfortune. 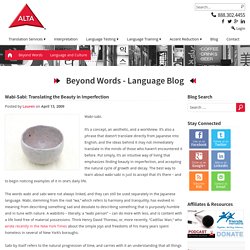 It’s a concept, an aesthetic, and a worldview. It’s also a phrase that doesn’t translate directly from Japanese into English, and the ideas behind it may not immediately translate in the minds of those who haven’t encountered it before. Put simply, it’s an intuitive way of living that emphasizes finding beauty in imperfection, and accepting the natural cycle of growth and decay. The best way to learn about wabi-sabi is just to accept that it’s there – and to begin noticing examples of it in one’s daily life. The words wabi and sabi were not always linked, and they can still be used separately in the Japanese language. Sabi by itself refers to the natural progression of time, and carries with it an understanding that all things will grow old and become less conventionally beautiful. FAUST - Feedback Analysis for User adaptive Statistical Translation. 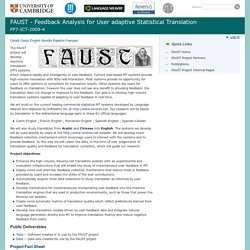 Current web-based MT systems provide high-volume translation with little real interaction. Most systems provide no opportunity for users to offer opinions or corrections for translation results. Other systems ask users for feedback on translation, however the user does not see any benefit to providing feedback: the translation does not change in response to the feedback. Why Did the "Riot Act" First Get Read? Words at Play : Top 10 Words Born in Conflict These days, if someone "reads the riot act" to you, they probably aren't actually reading anything. 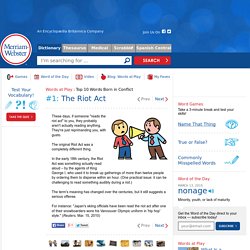 They're just reprimanding you, with gusto. The original Riot Act was a completely different thing. In the early 18th century, the Riot Act was something actually read aloud – by the agents of King George I, who used it to break up gatherings of more than twelve people by ordering them to disperse within an hour. Ignominious Pasquinade. A Trending Word Even We Had to Look Up Late last month the word pasquinade popped to the top of the most frequently looked-up word list. 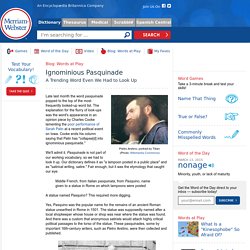 The explanation for the flurry of look-ups was the word's appearance in an opinion piece by Charles Cooke lamenting the poor performance of Sarah Palin at a recent political event on Iowa. Cooke ends his column saying that Palin has "collapse[d] into ignominious pasquinade. " We'll admit it. Pasquinade is not part of our working vocabulary, so we had to look it up.

Middle French, from Italian pasquinata, from Pasquino, name given to a statue in Rome on which lampoons were posted A statue named Pasquino? Yes, Pasquino was the popular name for the remains of an ancient Roman statue unearthed in Rome in 1501. A word about this Pietro Aretino fellow, courtesy of Encyclopaedia Britannica: He was born in the town of Arezzo, in the Republic of Florence, in 1492.

Wrought with meaning. Language Etymology. Tip of My Tongue. Thinkmap Visual Thesaurus - An online thesaurus and dictionary of over 145,000 words that you explore using an interactive map. WordVis, the visual dictionary. Poiemaeia. Histoire. Once Upon A Time. Quotatio. Plume. Rhapsodos. The Top 10 Relationship Words That Aren't Translatable Into English. Here are my top ten words, compiled from online collections, to describe love, desire and relationships that have no real English translation, but that capture subtle realities that even we English speakers have felt once or twice. 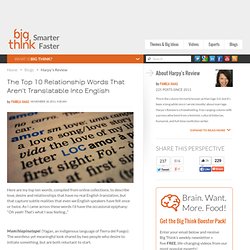 As I came across these words I’d have the occasional epiphany: “Oh yeah! That’s what I was feeling...” Mamihlapinatapei (Yagan, an indigenous language of Tierra del Fuego): The wordless yet meaningful look shared by two people who desire to initiate something, but are both reluctant to start. Oh yes, this is an exquisite word, compressing a thrilling and scary relationship moment. It’s that delicious, cusp-y moment of imminent seduction. Yuanfen (Chinese): A relationship by fate or destiny.

From what I glean, in common usage yuanfen means the "binding force" that links two people together in any relationship. But interestingly, “fate” isn’t the same thing as “destiny.” Retrouvailles (French): The happiness of meeting again after a long time. Things SA'cans say.... Le Mot Juste: A Dictionary of Classical and Foreign Words and Phrases: John Buchanan-Brown: 9780679734550: Amazon.com.

Related:  history   -  Tip of My Tongue   -  Thinkmap Visual Thesaurus - An online thesaurus and dictionary of over 145,000 words that you explore using an interactive map.   -  WordVis, the visual dictionary   -  The Top 10 Relationship Words That Aren't Translatable Into English   -  Education   -  Enterprise