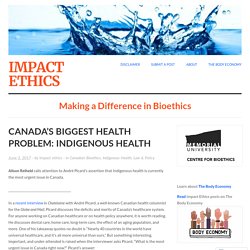 In a recent interview in Chatelaine with André Picard, a well-known Canadian health columnist for the Globe and Mail, Picard discusses the deficits and merits of Canada’s healthcare system. For anyone working on Canadian healthcare or on health policy anywhere, it is worth reading. He discusses dental care, home care, long-term care, the effect of an aging population, and more. One of his takeaway quotes no doubt is “Nearly 40 countries in the world have universal healthcare, and it’s all more universal than ours.” But something interesting, important, and under-attended is raised when the interviewer asks Picard, “What is the most urgent issue in Canada right now?”

Canadian Nurses Association: Why we are worried. Indigenous-led health care partnerships in Canada. The Indian Act. In this section Introduction to the Indian Act To be federally recognized as an Indian either in Canada or the United States, an individual must be able to comply with very distinct standards of government regulation… The Indian Act in Canada, in this respect, is much more than a body of laws that for over a century have controlled every aspect of Indian life. 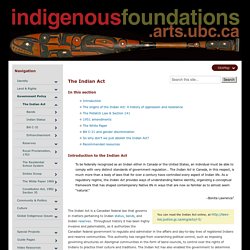 As a regulatory regime, the Indian Act provides ways of understanding Native identity, organizing a conceptual framework that has shaped contemporary Native life in ways that are now so familiar as to almost seem “natural.” –Bonita Lawrence1 You can read the Indian Act online, at The Indian Act is a Canadian federal law that governs in matters pertaining to Indian status, bands, and Indian reserves. 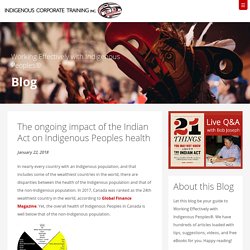 In 2017, Canada was ranked as the 24th wealthiest country in the world, according to Global Finance Magazine. Yet, the overall health of Indigenous Peoples in Canada is well below that of the non-Indigenous population. The Truth and Reconciliation Commission of Canada Summary Report includes 94 calls to action. Of those calls to action, seven are dedicated to health. Here’s #18. A systematic review of physical activity interventions to improve physical fitness and health outcomes among Indigenous adults living in Canada. Indigenous approaches to healing in critical care settings: Addressing the Truth and Reconciliation Report’s calls to action.

This month, Indigenous leaders have had a lot to say about actions taken by the federal government. 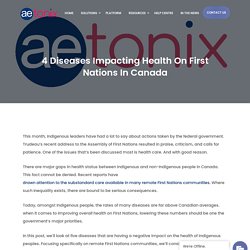 Trudeau’s recent address to the Assembly of First Nations resulted in praise, criticism, and calls for patience. One of the issues that’s been discussed most is health care. Why do Indigenous people in Canada face worse health outcomes than non-Indigenous people? – The Varsity. Menu Search Close The University of Toronto’s Student Newspaper Since 1880 Facebook-f Twitter Instagram. 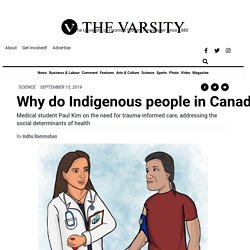 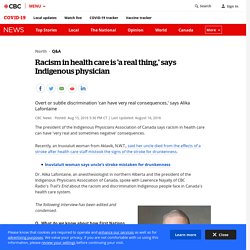 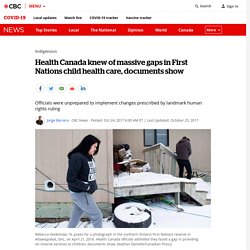 The Health Canada documents reveal the department knew it faced serious shortfalls in the level of health services provided to First Nations children and was unprepared to implement changes prescribed by the human rights ruling. The Canadian Human Rights Tribunal ruled in January 2016 that Ottawa discriminated against First Nation children by underfunding on-reserve child welfare services and by failing to apply Jordan's Principle, which places the needs of First Nations children ahead of jurisdictional disputes between governments. Creating conditions for Canadian aboriginal health equity: the promise of healthy public policy. First Nations Health Authority. Origins The lands in BC have been populated by the ancestors of First Nations since time immemorial. 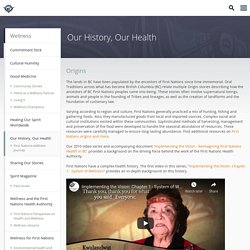 Oral Traditions across what has become British Columbia (BC) relate multiple Origin stories describing how the ancestors of BC First Nations peoples came into being. These stories often involve supernatural beings, animals and people in the founding of Tribes and lineages, as well as the creation of landforms and the foundation of customary law. Varying according to region and culture, First Nations generally practiced a mix of hunting, fishing and gathering foods. Also, they manufactured goods from local and imported sources. Closing the indigenous health gap in Canada:Results from the TransFORmation of IndiGEnousPrimAry HEAlthcare delivery (FORGE AHEAD)program. 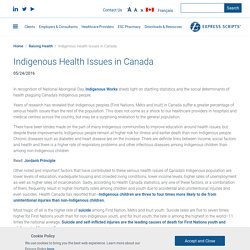 Years of research has revealed that Indigenous peoples (First Nations, Métis and Inuit) in Canada suffer a greater percentage of serious health issues than the rest of the population. This does not come as a shock to our healthcare providers in hospitals and medical centres across the country, but may be a surprising revelation to the general population. There have been strides made on the part of many Indigenous communities to improve education around health issues, but despite these improvements, Indigenous people remain at higher risk for illness and earlier death than non-Indigenous people. Chronic diseases such as diabetes and heart disease are on the increase. Read: Jordan’s Principle. Institute of Indigenous Peoples' Health - CIHR. Indigenous health.

The state if knowledge. Select health indicators of First Nations people living off reserve, Métis and Inuit. View the most recent version. Archived Content Information identified as archived is provided for reference, research or recordkeeping purposes. It is not subject to the Government of Canada Web Standards and has not been altered or updated since it was archived. Please "contact us" to request a format other than those available. This page has been archived on the Web. Mental Wellness and Substance Use. Why is this important? 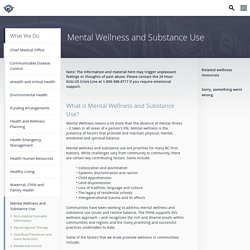 When it comes to mental wellness, BC First Nations deserve the best care and support services. That’s why FNHA works with communities to deliver programs and services - such as treatment centres, counselling and crisis lines - and with partners across the province to address service gaps. And change is happening. Wellness indicators continue to improve, showing the strength and resilience of First Nations and Aboriginal people. Mental health and wellness in First Nations and Inuit communities. Aboriginal Mental Health: The statistical reality.

Saman Khan Reprinted from the "Aboriginal People" issue of Visions Journal, 2008, 5 (1), pp. 6-7 It’s well known that the Aboriginal people of Canada face a unique set of mental health challenges.2 But what may not be so well known is that, in a 2002/03 survey, about 70% of First Nations adults living on reserves felt in balance physically, emotionally, mentally and spiritually. And, among Aboriginal people living both on and off reserve, those who did experience a mental health problem were much more likely than the rest of Canadians to seek professional help—a positive step towards healing. In some groups, the number of Aboriginal people seeking help was as high as 17%—compared to the Canadian average of 8%. These numbers would probably have been even higher if more mental health professionals were available in isolated areas. The mental health of Indigenous peoples in Canada: A critical review of research. Highlights Most research addresses colonialism; more nuanced approaches are recommended.

Overemphasis of substance use problems and suicide can have negative implications. Mental health services developed by Indigenous communities are most effective. Inuit are overrepresented in research; Métis are drastically underrepresented. Urban and off-reserve Indigenous populations are dramatically underrepresented. Abstract Many scholars assert that Indigenous peoples across the globe suffer a disproportionate burden of mental illness. Gender variations in the relationshipbetween social capital and mental healthoutcomes among the Indigenouspopulations of Canada.

Helping to close the gap in Indigenous health. Everyone in Canada deserves a healthy life free from heart disease and stroke. Yet the determinants of health and access to health care are not equal for everyone. Indigenous people now face some of the worst health outcomes in Canada. The need. Express Scripts Canada. Simply put, “Jordan’s Principle” is a child-first principle calling on the government of first contact to ensure First Nations children can access public services on the same terms as other children. The principle was a result of Jordan River Anderson, who was a First Nations child from Norway House Cree Nation in Manitoba. He was born with complex medical needs that could not be treated on-reserve. This resulted in Jordan spending more than two years in a hospital in Winnipeg, after which hospital doctors agreed that he could leave the hospital to be cared for in a family home.

The Ontario government is directing children's aid societies to stop sending "birth alerts" — the controversial practice of notifying hospitals about newborns they believe may need protection, which has led to babies being seized from new mothers. These so-called birth or hospital alerts disproportionately affect racialized parents, particularly Indigenous and Black mothers, Associate Minister of Children and Women's Issues Jill Dunlop said. The Ontario Native Women's Association applauded the announcement on Tuesday, saying Indigenous women have pushed for years for an end to the discriminatory practice. The ministry doesn't specifically track birth alerts, Dunlop said. But in the past year, she said, 442 children were removed from their mother between seven days and 12 months of being born, with 50 per cent of those referrals coming from medical staff.

She said Tuesday's announcement is one way that the province is fighting systemic racism in the child welfare system. SOGC: Indigenous Women's Health. The SOGC is committed to advancing women’s sexual and reproductive health and rights by addressing health inequities and promoting timely access to quality, culturally safe care. ABORIGINAL WOMEN IN CANADA. Centre of Excellence for Women's Health. 2007 Social Determinants of Health and Canada’s Aboriginal Women NWAC Submission to WHO Commission. Canadian Indigenous Womens Perspectives of Maternal Health and Health Care Services: A Systematic Review. Keywords. Why are Canada’s First Nations women dying at such an alarming rate? In Canada, Status First Nations persons—those listed in the country’s Indian Register—are significantly more likely than the average Canadian to meet an untimely death. When it comes to wellness outcomes, disparities along racial and ethnic lines are well documented across many metrics.

What is often overlooked, however, is what those data look like at the intersection of race and gender. 'They wouldn't do anything': Indigenous woman who lost baby alleges negligence, racism in B.C. hospitals. TORONTO -- An Indigenous woman in northern British Columbia is speaking out after she was allegedly mistreated at two hospitals while in labour, which she says lead to the death of her baby daughter. In an interview with the Aboriginal Peoples Television Network, Sarah Morrison from Haisla Nation said she was denied proper care at two B.C. hospitals and was denied an ambulance trip, which forced her father to drive her 45 minutes to a different hospital. “I think if all lives were held the same value this wouldn’t have happened,” Morrison told APTN. “The ambulance attendant asked if we could pay, I said: ‘I don’t care how much it is, I will pay it.”