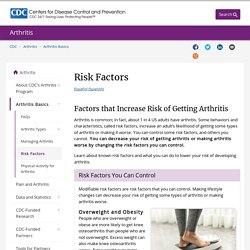 Making lifestyle changes can decrease your risk of getting some types of arthritis or making arthritis worse. Extra weight puts more stress on joints. Overweight and Obesity People who are overweight or obese are more likely to get knee osteoarthritis than people who are not overweight. Excess weight can also make knee osteoarthritis worse. What you can do: Maintain a healthy weight. Infection Many microbial agents, like bacteria and viruses, can infect joints and potentially cause the development of some types of arthritis.

What you can do: See your doctor right away if your joints are swollen, warm, or red. Joint Injuries. Arthritis. View the most recent version. 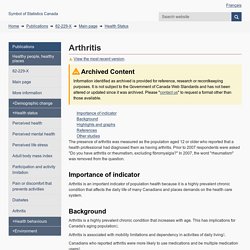 Archived Content Information identified as archived is provided for reference, research or recordkeeping purposes. It is not subject to the Government of Canada Web Standards and has not been altered or updated since it was archived. Please "contact us" to request a format other than those available. This page has been archived on the Web. The presence of arthritis was measured as the population aged 12 or older who reported that a health professional had diagnosed them as having arthritis.

Arthritis. The term arthritis is used to describe more than 100 conditions that affect joints, the tissues which surround joints, and other connective tissue. 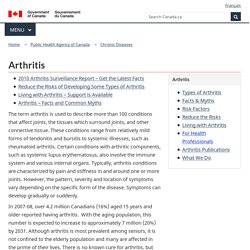 These conditions range from relatively mild forms of tendonitis and bursitis to systemic illnesses, such as rheumatoid arthritis. Certain conditions with arthritic components, such as systemic lupus erythematosus, also involve the immune system and various internal organs. Typically, arthritis conditions are characterized by pain and stiffness in and around one or more joints. However, the pattern, severity and location of symptoms vary depending on the specific form of the disease. Provincial Comparisons 2018. Mortality Due to Diabetes - Health Provincial Ranking - How Canada Performs. Key Messages Nunavut is the only Canadian region to place at the top of the rankings—but its low mortality rate due to diabetes is likely a result of high premature mortality from other diseases. 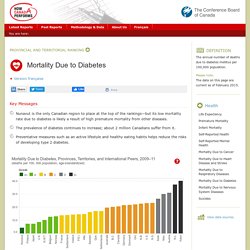 The prevalence of diabetes continues to increase; about 2 million Canadians suffer from it. Preventative measures such as an active lifestyle and healthy eating habits helps reduce the risks of developing type 2 diabetes. Putting mortality due to diabetes in context Diabetes is a global epidemic and, according to the International Diabetes Federation, “one of the most challenging health problems in the 21st century.” Diabetes has also shifted down a generation—from a disease of the elderly to one that affects those of working age or younger. Why Is Diabetes Mellitus a Risk Factor for Contrast-Induced Nephropathy? 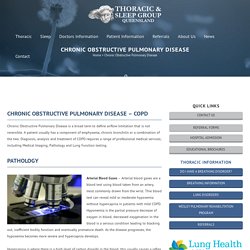 Spirometry is a very simple test and measure inhalation and exhalation volumes of a patients breath. In COPD FEV1/FVC ratio should be below 0.7. This figure is determined from a vast number of studies which have tested lung function in healthy patient and then compared the results to patients confirmed to have COPD. The studies will compare data on sexes, ages and various other demographic variables to identify a range of “normal” functioning. 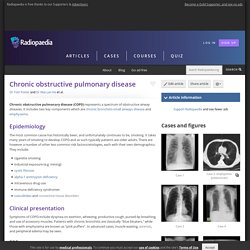 It includes two key components which are chronic bronchitis-small airways disease and emphysema. The most common cause has historically been, and unfortunately continues to be, smoking. It takes many years of smoking to develop COPD and as such typically patients are older adults. There are however a number of other less common risk factors/etiologies, each with their own demographics. They include: National Lung Health Framework. COPD - Diagnosis, Evaluation and Treatment. Taking action chronic diseases.

Determinants of Health. What makes some people healthy and others unhealthy? 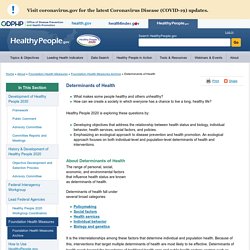 How can we create a society in which everyone has a chance to live a long, healthy life? Healthy People 2020 is exploring these questions by: Developing objectives that address the relationship between health status and biology, individual behavior, health services, social factors, and policies.Emphasizing an ecological approach to disease prevention and health promotion. Chronic Diseases and Conditions. Individual and social determinants of multiple chronic disease behavioral risk factors among youth. Chronic Diseases Social Determinants e. Information archivée dans le Web. The lung association. Chronic Obstructive Pulmonary Disease (COPD) is a slowly progressive respiratory disorder that causes the airways of the lungs to be inflamed and become “obstructed” or blocked. 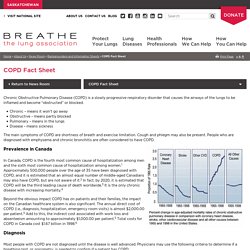 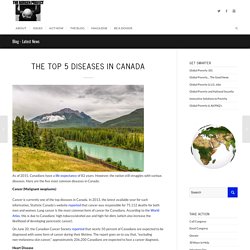 However, the nation still struggles with various diseases. Here are the five most common diseases in Canada: Cancer (Malignant neoplasms) Cancer is currently one of the top diseases in Canada. In 2013, the latest available year for such information, Statistic Canada’s website reported that cancer was responsible for 75,112 deaths for both men and women. Lung cancer is the most common form of cancer for Canadians. On June 20, the Canadian Cancer Society reported that nearly 50 percent of Canadians are expected to be diagnosed with some form of cancer during their lifetime. Heart Disease Heart disease killed 49,891 Canadians in 2013. Stroke (Cerebrovascular diseases) In 2013, strokes also claimed 13,400 Canadian lives. 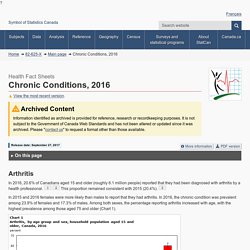 In 2016, the chronic condition was prevalent among 23.9% of females and 17.3% of males. Among both sexes, the percentage reporting arthritis increased with age, with the highest prevalence among those aged 75 and older (Chart 1). In 2016, life satisfaction was lower amongst those with arthritis. High blood pressure. Morrison March8 CDPreventionChallengesinCanda. Chronic Disease Facts and Figures. Canadian Chronic Disease Indicators The Canadian Chronic Disease Indicators (CCDI) provide information on chronic diseases, their determinants, and their risk and protective factors in Canada. Using an intuitive Data Tool, pan-Canadian estimates, time trends and data breakdowns by demographic and socioeconomic variables are provided for each indicator and their specific measures. Positive Mental Health Indicator Framework The Positive Mental Health Surveillance Indicator Framework (PMHSIF) is a pan-Canadian resource on positive mental health outcomes and associated risk and protective factors.

Positive mental health is a state of well-being that allows us to feel, think, and act in ways that enhance our ability to enjoy life and deal with the challenges we face. Chronic Diseases. Chronic Disease Prevention and Management. March 2007 ISBN 978-0-662-45024-5 (PDF version) Cat. H21-286/1-2007E-PDF (PDF version) This report is one in a series of five syntheses of Primary Health Care Transition Fund (PHCTF) initiative results addressing the following topics: Chronic Disease Prevention and Management, Collaborative Care, Evaluation and Evidence and Information Management and Technology.

The fifth report is an overall analysis on the role and impact of the PHCTF in primary health care renewal entitled Laying the Groundwork for Culture Change: The Legacy of the Primary Health Care Transition Fund. The Social Determinants of Chronic Disease.