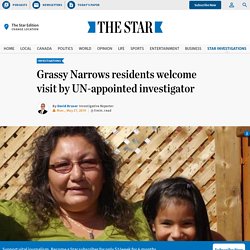 The 58-year-old suspects the mercury that has poisoned her community for decades is to blame. She believes mercury also contributed to her granddaughter Robyn Fiddler’s suicide two years ago. The girl, only 11 years old when she died, was born with an underdeveloped brain and later developed seizures, Swain said. “The majority of my whole family was hunters, fishers, trappers because that was our way of life. When the mercury came in, people were told to quit all fishing activities and more or less our people were forced out of the river system. Swain told her story to the United Nations Special Rapporteur on toxics, Baskut Tuncak.

The mercury contaminated the walleye downstream and poisoned the people who ate the fish. Canada Suicide Prevention Service. Death Resulting From Gasoline "Sniffing": A Case Report - Centre for Suicide Prevention. Fire and suicide: a three-year study of self-immolation deaths - PubMed. Thirty-two self-immolation deaths by fire, representing about 1% of suicides, occurred in the province of Ontario (population 9 million), Canada, from 1986 through 1988. 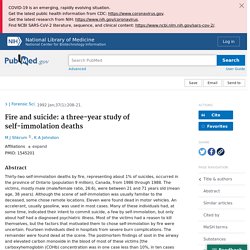 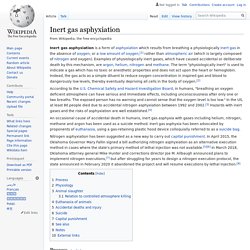 Chemical Safety and Hazard Investigation Board, in humans, "breathing an oxygen deficient atmosphere can have serious and immediate effects, including unconsciousness after only one or two breaths. The exposed person has no warning and cannot sense that the oxygen level is too low. " Mental Health and Wellness Services for Indigenous Children and Youth. Wellness in Indigenous communities and cultures is about being in balance and harmony. 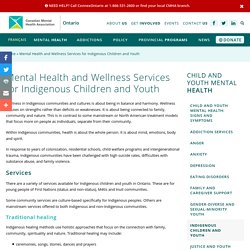 Wellness focuses on strengths rather than deficits or weaknesses. It is about being connected to family, community and nature. This is in contrast to some mainstream or North American treatment models that focus more on people as individuals, separate from their community. Within Indigenous communities, health is about the whole person. It is about mind, emotions, body and spirit. The Federal and State Role in Mental Health. The Federal Role in Mental Health The federal government works in partnership with the states to address mental health. 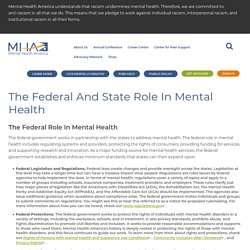 The federal role in mental health includes regulating systems and providers, protecting the rights of consumers, providing funding for services, and supporting research and innovation. As a major funding source for mental health services, the federal government establishes and enforces minimum standards that states can then expand upon. Federal Legislation and Regulations. Federal laws create changes and provide oversight across the states.

Brave Heart [18] stated that although post-traumatic stress disorder (PTSD) is adequate to describe the depth and effects of cumulative trauma, it is too narrow in scope and therefore fails to adequately address complex Aboriginal experiences. Error - Cookies Turned Off. This paper reviews literature on self‐harm and suicide among Indigenous populations in four nations with histories of British colonization, with a more detailed exploration of patterns and primary care considerations in Australian Aboriginal and Torres Strait Islander populations. 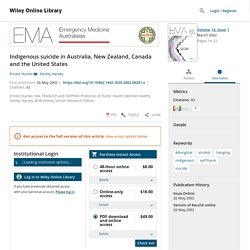 Issues of definition, under‐reporting, lack of reporting, varying coronial practices and the influence of race on investigative procedures make comparisons of suicide rates among indigenous populations problematic. However, international interpretations highlight the impact of the breakdown of cultural structures and historical processes associated with colonization. Free Grassy » River Run 2019: Walk with Grassy Narrows for Mercury Justice!

Wrap-up videoPhotos Audio of speechesCoverage on CTV Rain or Shine! 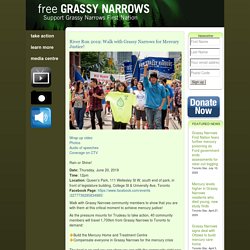 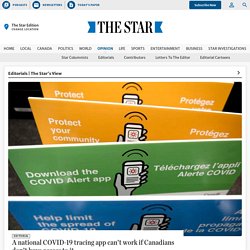 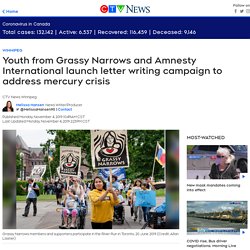 The annual Write for Rights event, which takes place around International Human Rights Day Dec. 10, will highlight 10 cases of young people around the world experiencing human rights abuses, including the Indigenous Anishinaabe youth from the northwestern Ontario First Nation. The community, also known as Grassy Narrows First Nation, has been impacted by mercury poisoning since the heavy metal was dumped into a local river system by a paper mill in Dryden, Ont., in the 1960s. The campaign says those living in the community continue to be affected by health problems, the loss of jobs, and the erosion of their cultural traditions. Singh targets Liberal record on Indigenous issues as government challenges human rights ruling.

NDP Leader Jagmeet Singh attacked the Liberals' record on Indigenous issues, saying the government's decision to appeal the latest ruling on compensation for Indigenous children demonstrates the kind of inaction that can be expected if they're re-elected. 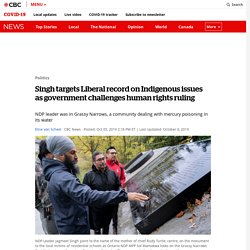 This week the Liberal government announced it would challenge a landmark human rights ruling to compensate apprehended First Nations children harmed by the on-reserve child welfare system and under-funded child and family services. Singh reacted to the news on Saturday while he was campaigning in Grassy Narrows, an Indigenous community in northern Ontario that has been dealing with mercury poisoning in its water supply for years, and has been under a water advisory since 2013. On Friday, the Attorney General of Canada filed an application for a judicial review and for a stay of the ruling with the Federal Court — just over two weeks before the federal election and days before the Oct. 7 deadline for filing an appeal.

Amnesty International Canada. Supreme Court rules companies are responsible for cleanup of Grassy Narrows site. Two forest-product companies are on the hook for looking after a mercury-contaminated site near Ontario’s Grassy Narrows First Nation, the Supreme Court of Canada has ruled. The 4-3 decision Friday brought some clarity to a long-running dispute over one element of the legacy of environmental poisoning that has caused significant health problems for many residents. Eight years ago, the Ontario government ordered Weyerhaeuser Co. and a firm that later became Resolute Forest Products to care for a mercury waste-disposal site in Dryden, Ont., where toxic material from a pulp-and-paper mill’s operations entered the English-Wabigoon river system in the 1960s. Free Grassy. Asubpeeschoseewagong First Nation. Indian reserve in Ontario, Canada Asubpeeschoseewagong First Nation (also known as Grassy Narrows First Nation or the Asabiinyashkosiwagong Nitam-Anishinaabeg in the Ojibwe language) is an Ojibwe First Nations band government who inhabit northern Kenora in Ontario, Canada.

Their landbase is the 4,145 ha (10,240 acres) English River 21 Indian Reserve. It has a registered population of 1,595 as of October 2019, of which the on-reserve population was 971[2] They are a signatory to Treaty 3. Governance[edit] Grassy narrows first nation website. Free Grassy. Grassy Narrows gets funds to build mercury poisoning care home – now they need money to run it - APTN News. Ottawa has made yet another promise to Grassy Narrows as the community is one step closer to realizing a vision for an on-reserve care home for those dealing with the devastating effects of mercury poisoning. There is no money for long-term operations and maintenance included in the $19.5-million framework agreement to build the facility, which was signed on April 2 by Asubpeeschoseewagong Netum Anishinabek, commonly called Grassy Narrows First Nation, and the federal government. The minister of Indigenous Services (ISC) who signed on behalf of the government promised to get that money.

Rudy Turtle, chief of Grassy Narrows, hopes he keeps that promise. “$19.5 million is just for the building itself, but we are in the process of securing another, I think, $68 million and that still has to go to cabinet for approval,” said Turtle, who talked to APTN News from his Grassy Narrows home. Grassy Narrows First Nation releases health report detailing fallout from poisoned fish. Officials with Grassy Narrows First Nation are scheduled to publicly release findings of a new report linking a number of "grave" health problems in the community linked to eating contaminated fish. The study was done by environmental health expert Donna Mergler, a member of a World Health Organization-affiliated research group. Grassy Narrows mercury victims up to 6 times more likely to have debilitating health problems, report says. Residents of a northwestern Ontario First Nation who have been diagnosed with mercury poisoning are up to six times more likely to suffer from a wide range of debilitating health problems, a new report finds.

Furthermore, according to the United States Department of Transportation, these records must be readily available if requested by law enforcement. Drivers must be able to present their duty reports from the past seven days, plus the current day. What is the Electronic Logging Device Mandate? E-Laws. Bill 120, Highway Traffic Amendment Act (Ignition Interlock Device), 2000 - Legislative Assembly of Ontario.