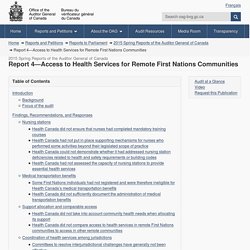 Contribution—A transfer payment subject to performance conditions specified in a funding agreement. A contribution is to be accounted for and is subject to audit. Source: Policy on Transfer Payments, Treasury Board, 2012 Clinical and client care services—Services provided by Health Canada that consist of urgent and non-urgent care. Urgent care involves immediately assessing a patient to determine the severity of a serious illness or injury and the type of care needed. 4.1 Health Canada (the Department) supports First Nations through various health programs based on the 1979 Indian Health Policy. 4.2 Health Canada also supports First Nations individuals by providing medical transportation benefits when health services are not available within the community.

Context. Indigenous Peoples Atlas of Canada. How Indigenous midwives help reconnect women with culture and pregnancy care. More than a century ago, access to an Indigenous midwife was common practice in First Nations communities. 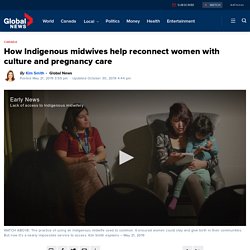 However, accessing an Indigenous midwife in Canada today is now nearly impossible, according to Carol Couchie, an Indigenous midwife and co-chair of the National Aboriginal Council of Midwives (NACM). The traditional practice ensured women could stay and give birth at home, without having to travel to larger centres, while also connecting with culture. Story continues below advertisement “Midwives could have been woven into the landscape of medicalized birth, and our culture could have been woven into it as well, to keep women safe. It didn’t have to be all or nothing,” Couchie said. “It really depends on where they would live in the country.

READ MORE: How hired postpartum help is becoming more commonplace for moms. Summary First Peoples Second Class Treatment Final. Why many Northern Indigenous women are still relocated to deliver their babies. “I wanted to have my babies at home.” 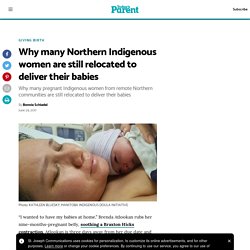 Brenda Atlookan rubs her nine-months-pregnant belly, soothing a Braxton Hicks contraction. Atlookan is three days away from her due date and 360 kilometres from home, at a hostel in Thunder Bay, Ont. Three weeks ago, she got on a small plane at Eabametoong First Nation, accessible only by plane (or, for a few months of the year, by ice roads), for the four-hour flight south. (The trip takes a while because the route stops at several other small communities on the way.) Indigenous women should not have to give birth alone: Editorial.

For generations, doctors have known that it’s good for women to have a partner or coach with them when they give birth. 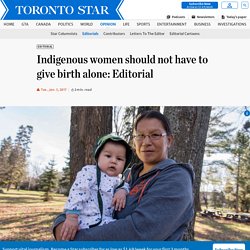 First, studies show there are actual medical benefits. When pregnant women have companions with them they experience shorter labours and have fewer interventions such as C-sections and epidurals. Second, there are psychological benefits if someone is there to provide emotional support through postpartum hurdles, such as hemorrhaging, retained placentas or tears that require surgery. So why, in 2017 does Health Canada pay to fly indigenous women living on remote reserves into communities such as Sioux Lookout, Thunder Bay or Kenora to give birth, but regularly refuses to pay for their partners or another coach to accompany them? It makes no sense. Under Health Canada’s Non-Insured Health Benefits program, the plane fare for escorts can be covered only if the pregnancy is deemed high risk. 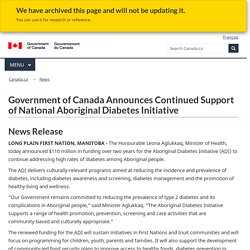 The ADI delivers culturally-relevant programs aimed at reducing the incidence and prevalence of diabetes, including diabetes awareness and screening, diabetes management and the promotion of healthy living and wellness. Ch38 type 2 diabetes and indigenous peoples. Chapter 6: Diabetes in Canada: Facts and figures from a public health perspec... Introduction Canada's Constitution Act of 1982 recognizes three distinct groups of Aboriginal people: First Nations, Inuit and Métis.1 Each group has a unique history, culture, local languages, and spiritual beliefs.2;3 Great diversity exists within and between each group. 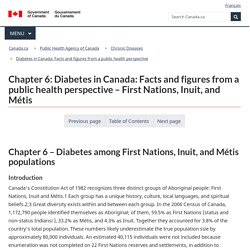 In the 2006 Census of Canada, 1,172,790 people identified themselves as Aboriginal; of them, 59.5% as First Nations (status and non-status Indiansi ), 33.2% as Métis, and 4.3% as Inuit. Together they accounted for 3.8% of the country's total population. These numbers likely underestimate the true population size by approximately 80,000 individuals. An estimated 40,115 individuals were not included because enumeration was not completed on 22 First Nations reserves and settlements, in addition to approximately 40,623 individuals who were missed due to incomplete enumeration in participating First Nations communities.5 The Aboriginal population is younger and growing more rapidly than the general Canadian population. Mental Health and Suicide in Indigenous Communities in Canada. Social isolation of seniors: A Focus on Indigenous Seniors in Canada. Official title: Social isolation of seniors—Supplement to the social isolation and social innovation toolkit: A Focus on Indigenous Seniors in Canada Part 1: Social isolation of Indigenous seniors Diversity of the Indigenous community [Indigenous] peoples have occupied the territory now called Canada for thousands of years. 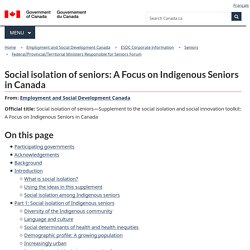 Many diverse and autonomous peoples lived in this territory and had distinct languages, cultures, religious beliefs and political systems. Each community or culture had its own name for its people and names for the peoples around them.Footnote 7 Indigenous peoples in Canada are heterogeneous and have maintained a high degree of cultural diversity. In addition to this cultural diversity, there is also a high degree of geographic diversity. Indigenous Health in Canada.