Fragrant Nature Munnar. China: One foot in the past and both eyes on the future - Destinations. The Jakarta Post’s Liza Yosephine recently visited Beijing, Chengdu, Shenzen and Guangzhou following an invitation from the Chinese Embassy in Jakarta. 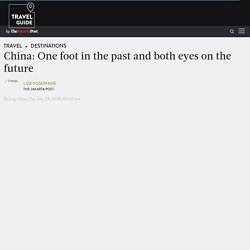 Here is her report. As a land of centuries-old intricately decorated temples and ancient palaces once occupied by majestic dynasties, China preserves its impressive history while keeping a keen eye on the future. The charm of the past may be among the main reasons tourists continue to visit the country, seeking a first-hand glimpse into its rich culture, but a taste of the contemporary is also inevitable.

For many travelers who do not speak Mandarin, visiting China would be most convenient in a tour group, where itineraries are pre-organized, including trips to the usual tourist attractions as well as prearranged main meals throughout the day. Citilink eyes new route from Banyuwangi to Kuala Lumpur - News. Garuda Indonesia's low-cost subsidiary Citilink has revealed plans to open a new international route from Banyuwangi in East Java to Kuala Lumpur in Malaysia on Tuesday. 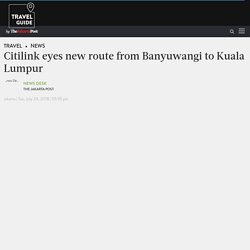 "Today we are in Banyuwangi to strengthen this international route plan as well as check on the preparation of Banyuwangi's Blimbingsari Airport to become an international airport," PT Citilink Indonesia commercial director Andy Adrian Febriyanto said in a statement on Tuesday. Andy said Banyuwangi was considered a promising market, as its tourism characteristics were highly attractive to Malaysian tourists, starting with the culture and landscape to the local character and cuisine. "The current trend among Malaysian tourists is adventure tourism, such as hiking in the national parks. Banyuwangi has all of that with its Ijen Crater and the national parks of Meru Betiri and Alas Purwo," he added. Its proximity to Bali was a supporting factor, allowing tourists to visit Bali after exploring Banyuwangi. 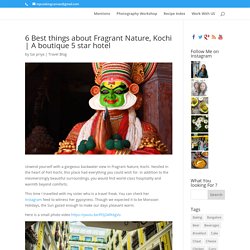 Nestled in the heart of Fort Kochi, this place had everything you could wish for. In addition to the mesmerizingly beautiful surroundings, you would find world-class hospitality and warmth beyond comforts. This time I travelled with my sister who is a travel freak. You can check her Instagram feed to witness her gypsyness. Though we expected it to be Monsoon Holidays, the Sun gazed enough to make our days pleasant warm.

Here is a small photo video Fragrant Nature Kochi is one among the most sought 5 Star Boutique hotels in Kerala offering history, art, culture and breathtaking views of the harbour. Blissful Stay at Fragrant Hotels, Kerala. This blog is about three wellness and spa hotels that belong to the Fragrant Hotels at three different locations in Kerala, the God’s own country. 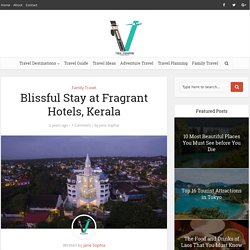 Yesterday, I met my neighbor’s mother who returned from Kollam, Kerala. She recounted her one week stay at the Fragrant Hotels with such a great enthusiasm that at the end of a two hour listening period, I booked my 4 days stay at Fragrant Hotels in Munnar. Hilton to open Southeast Asia’s first Waldorf Astoria in Bangkok - News. Hilton's luxury brand, Waldorf Astoria Hotels & Resorts, will welcome its first guests in Southeast Asia in the third quarter of 2018 with the opening of Waldorf Astoria Bangkok. 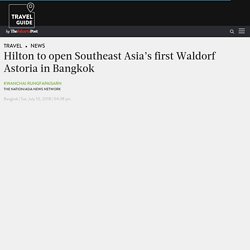 The chain has set a plan for the expansion of Waldorf Astoria in the other parts of Southeast Asia market, including in Maldives and Indonesia. Set to be one of the region’s most anticipated hotel openings this year, the grand debut will introduce the brand’s iconic experience to discerning travelers in the vibrant Thai capital. ‘Fragrant Nature’ After 118 years, Paris to bid 'au revoir' to its Metro tickets - News. They've been in use since 1900, when the Paris Metro opened for business, but soon the city's familiar rectangular tickets will become a thing of the past, replaced by a fully automated system similar to the one in London. 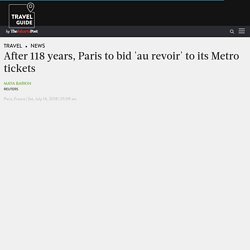 For many tourists, the little white tickets -- often purchased in a 'carnet' of 10 -- are inseparable from a visit to the city. They're frequently found years later tucked between the pages of a book, in the back of wallet or under a sofa. But they are also easy to lose, often end up littering the pavements, where they take up to a year to decompose, and the magnetic strip on the back tends to fail over time, meaning the tickets, 550 million of which are sold each year, don't work. Blissful Stay at Fragrant Hotels, Kerala. Java beats Bali, Lombok, as 'best island in the world' - News. The island of Java has been recognized as the best island in the world in the annual World's Best Awards from American travel publication Travel+Leisure, a reader-based survey on their travel experiences around the globe. 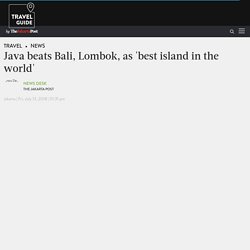 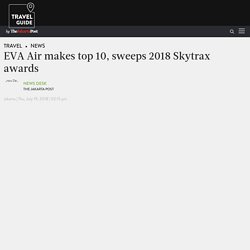 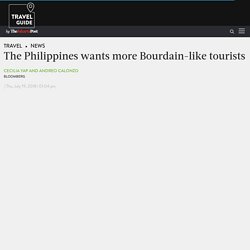 The Philippines wants to make sure those tourists keep coming even as it shut down one of Asia’s top beaches. The Southeast Asian nation credits the late gourmand for shining a light on local dishes such as "lechon" (roasted pork) and "sisig" (minced pork ears and liver), Tourism Secretary Bernadette Romulo-Puyat said, and it plans to target adventurers like Bourdain. Fragrant Nature Backwater Resort And Ayurveda Spa - Yoga Retreat in Kollam. Fragrant Nature Backwater Resort And Ayurveda Spa, Kollam is undoubtedly the best experience in backwaters. Ranked No. 1 in TripAdvisor, we delight all our guests with a private balcony that offers panoramic view of the backwaters for all categories of rooms and ensures that Nature is never far from one's door step.

Yoga in the serene backdrop of Mala Lake is sheer magic and there are packages that include Daily yoga, Meditation sessions, Consultations with Doctor and Yoga master. AirAsia named world’s best low-cost airline - News. AirAsia has taken out the title of World’s Best Low-Cost Airline at the 2018 Skytrax World Airline Awards. 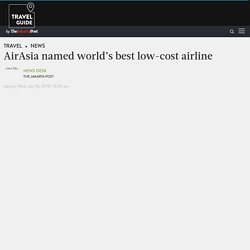 It was the company's 10th consecutive win, marking a decade of being the world’s best carrier in its field. The awards event was held on July 17 in London and is known as the equivalent of the Oscars for the airline industry. “I am honored to be celebrating this record-breaking 10-year record with our loyal Allstars,” said Datuk Kamarudin Meranun, co-founder of AirAsia, as he received the award. Beijing's new airport comes with new construction tech - News. Beijing's new airport - currently under construction in the southern part of the city - is loaded with quality innovations that will make it one of the most efficient in the world, even as it becomes the world's largest airport. The long-term goal for the facility is to handle up to 100 million passengers and 4 million tons of cargo each year. A digital GPS control system was adopted for a ground compactor - a machine with a crane and a hanging hammer that repeatedly slams into the ground to compress soil and gravel in the construction of the roads and in laying the foundation of the runways.

To make runways of high quality, it's essential that the underlying ground is compacted to prevent earth movement that can crack or otherwise damage the runway surface. The digital controller is new in China's civil aviation construction, according to Dong Jiaguang, a manager in the new airport's airfield engineering department. Read also: Date announced for opening of new Beijing airport. Singapore Airlines bags world's best airline title - News. Singapore Airlines (SIA) has dethroned Qatar Airways to clinch the title of world's best airline, following a global survey of more than 20 million travelers. The last time SIA took home the gold award was in 2008, and last year it came in second in the ranking done by London-based research firm Skytrax. This year, Qatar came in second while Japan's All Nippon Airways took third place. SIA also bagged the top spot in three other categories in the latest ranking - Best First Class, Best First Class Airline Seat and Best Airline in Asia.

The awards, presented yesterday evening in London, are based on surveys of travellers who rated more than 335 airlines between August last year and May this year. A closer look at Indonesia's four UNESCO-recognized Global Geoparks - Destinations. Indonesia currently has four geoparks of international standard listed as UNESCO Global Geoparks, kompas.com has reported.

These geoparks were recognized by UNESCO because of their rich natural heritage value, which makes them fascinating tourist attractions. Those who want to learn more about Indonesia's UNESCO Global Geoparks can look at the list below. Batur Geopark The Batur Global Geopark in Bali was included on the organization’s list in Sept. 2012. Located in Bangli regency, the geopark features two volcanic calderas as well as a complete volcano landscape with caldera walls, cones and craters, geothermal phenomena, a lake, lava flows, pyroclastic flows and tephra. A bit of the Greek islands in the heart of historic Athens - Destinations. "The Acropolis? It's that way. " Residents of historic Anafiotika are used to giving directions to tourists, lost in the narrow, winding alleyways of this unique but little-known hillside neighbourhood in the heart of Athens. Looking as if it's lifted straight out of the Greek islands, Anafiotika's tiny white-washed houses with brightly-painted shutters and doors were designed to resemble their builders' own Aegean Sea homes.

The tranquil neighbourhood was constructed on the northeastern side of the hill leading up to the ancient Acropolis, and its 100-odd, tile-roofed houses -- known as the Anafiotika -- are as old as the modern Greek capital itself. "The Anafiotika have real historical value," says architect Panagiotis Paraskevopoulos, a resident of the nearby historic Plaka district. "Working-class architecture with Cycladic elements -- it's like a journey back in time," he said. That included his new palace, which is now the country's parliament. There are no street signs here. 72 Hours in Kochi, your Kerala Backwaters Holiday - danteharker. Two Rafflesia flowers bloom in North Bengkulu - News. Two Rafflesia gadutensis flowers reportedly bloomed in the Boven Lais protected forest in North Bengkulu regency, Bengkulu province, on Saturday. Dua Rafflesia gadutensis mekar di Bengkulu Utara — Antara Bengkulu (@ANTARABengkulu) July 16, 2018 Umbara, a member of Komunitas Peduli Puspa Langka (Community Care for Rare Flowers), said that the flowers bloomed at the same time, each with a diameter of around 1.5 meters.

Fruit picking grows in popularity among foreign visitors to Japan - News. Tourist farms in Japan have been attracting hordes of foreign visitors who are placing fruit picking high on their travel itineraries as the global reputation of Japanese fruit grows. With more tourists seeking experiences over material goods during their trips, a number of companies have started getting involved in farm tourism, and tourist farms are becoming can't-miss destinations, especially outside major cities. Dubai now hosts largest living green wall - News. The Middle East’s largest living green wall featuring over 80,000 plants has been unveiled at Dubai Wharf in Dubai, the United Arab Emirates (UAE). Created by Dubai Properties, the wall is expected to offset an estimated 4.4 tons of carbon dioxide ( CO2 ) a year. According to the Gulf News, its lead developer was encouraged to add it because it was believed that it would not only add aesthetic value but would improve the well-being of residents and visitors.