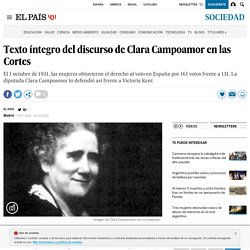 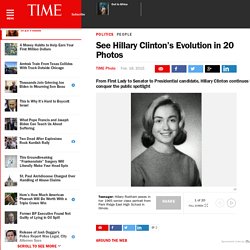 Conventional wisdom dictates that to save money, you need to squirrel away as much as possible while drastically reducing your spending, period. While there is some merit to that strategy, the smarter way to grow your wealth is to cultivate careful spending habits that will allow you to maximize your savings without cramping your style. Here are four smart spending habits to help you save your first million dollars. 1.

One easy way to keep your finger on the pulse of your spending habits is to break down your expenses into categories. Destructive expenses refer to, “Overdraft fees, using credit to consume, spending on vices, or products or services you don’t use or that don’t add value to your life,” according to Gunderson. Productive expenses are those that will make you money, like hiring the ideal employee or being an early investor in a company or product that goes viral. 2. 3. To fight income inequality, tell your friends how much you make. When Erica was a young child, she had a hard time coping with the absence of her father. 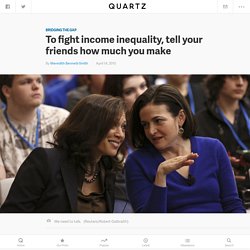 Even as a five-year-old, she would violently act out. Her mother shielded Erica from the knowledge that her dad was in prison, a convicted serial rapist. Eventually, counselors at a specialized after-school program revealed to Erica that her father was behind bars. Draw the Line. Silencio en Brasil frente al drama del aborto clandestino. Should Paid 'Menstrual Leave' Be a Thing? - Emily Matchar. Some countries mandate a legal right to leave for women during their periods. 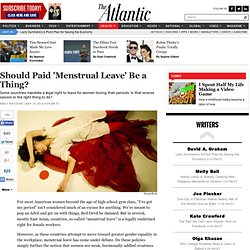 Is that reverse sexism or the right thing to do? Rbmay/flickr For most American women beyond the age of high school gym class, “I’ve got my period” isn’t considered much of an excuse for anything. We’re meant to pop an Advil and get on with things, Red Devil be damned. But in several, mostly East Asian, countries, so-called “menstrual leave” is a legally enshrined right for female workers. However, as these countries attempt to move toward greater gender equality in the workplace, menstrual leave has come under debate. The issue turns out to be surprisingly complicated, with complex historical roots and supporters on both sides of the liberal-conservative divide. Japan has had menstrual leave since just after World War II. La mujer latinoamericana ya no es como quieren los hombres. Girl, 11, demands DC Comics features more female superheroes – so they draw her as one - Americas - World - The Independent.

Rowan Hansen had wrote a letter to the creators of Superman and Batman to express her upset by saying: “I love your comics but I would love them a lot more if there were more girls.” 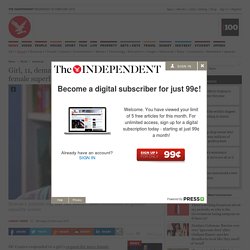 “Please do something about this, girls read comics too and they care,” the 11-year-old from Champaign, Illinois, added according to NBC’s Today show. A DC Comics artist drew Rowan as a superhero complete with her blonde bob hairstyle and spectacles with a burgundy and yellow outfit to help her fly over a dandelion field. Previously, they sent out tweets saying that they’re “working hard to create more superhero fun for girls” but she had said that, even though she appreciated the responses, her quest to see more girl characters was not over.

“It was really, really cool, because they’re so big and important people,” she said of the tweets. ¿'Perdida' es machista? A brain-dead Irish woman’s body is being used as an incubator. Be angry. In Ireland, a woman who is clinically dead but 17 weeks pregnant is being kept alive against her family’s will. 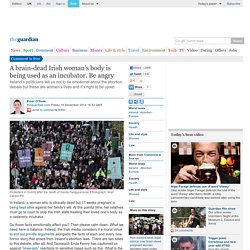 At this painful time, her relatives must go to court to stop the Irish state treating their loved one’s body as a cadaveric incubator. Do those facts emotionally affect you? Then please calm down. Between the Lines: Chimaman... on Livestream. “I am one in three, and I WILL BE the one who yells from the rooftops until those numbers change” – Teri Hatcher. Date : 25 November 2014 [Check against delivery] Your Excellency Ban Ki-moon, Secretary-General of the United Nations, Your Excellency Ms. 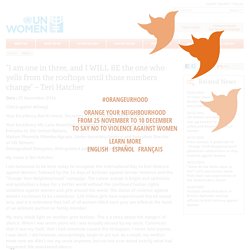 Lana Nusseibeh, Permanent Representative of United Arab Emirates to the United Nations, Madam Phumzile Mlambo-Ngcuka, Under-Secretary-General and Executive Director of UN Women, Distinguished Delegates, distinguished panelists, and dear guests, Video: Actress Teri Hatcher gives speech on gender violence at United Nations #Orangeurhood. Hombres, hablemos de violencia machista. The Time I Didn’t Stand Up to a Street Harasser. It had been a while since I’d really thought of Harry, one of the guys I played basketball with over the summer. 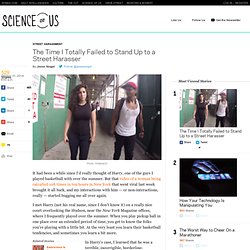 But that video of a woman being catcalled 108 times in ten hours in New York that went viral last week brought it all back, and my interactions with him — or non-interactions, really — started bugging me all over again. I met Harry (not his real name, since I don’t know it) on a really nice court overlooking the Hudson, near the New York Magazine offices, where I frequently played over the summer. When you play pickup ball in one place over an extended period of time, you get to know the folks you’re playing with a little bit. At the very least you learn their basketball tendencies, and sometimes you learn a bit more. Why we should all be feminists. Take this, for example: “Gender matters everywhere in the world. 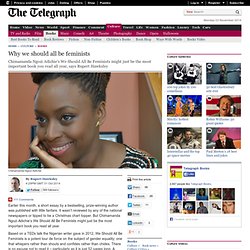 And I would like today to ask that we should begin to dream about and plan for a different world. A fairer world. A world of happier men and happier women who are truer to themselves. Emma Watson, feminism and thoughts from my college advisor. “All that is needed for the forces of evil to triumph is for good men and women to do nothing.” 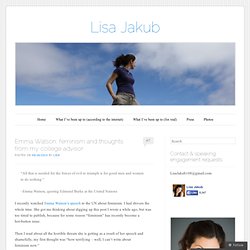 Earlier this summer, fresh from college graduation, Emma Watson, was named a U.N. Women Goodwill Ambassador. Though the ripples of her involvement over the past few months can be seen online (crashing the U.N. Web site, using Twitter to denounce a sexist politician in Turkey or respond to the gender politics of the recent celebrity nude photo hack), Watson’s power in person is an entirely different matter. The actress gave an impassioned speech on feminism and gender at the U.N. headquarters in New York this weekend to launch the “HeForShe” campaign which aims to galvanize one billion men and boys as advocates for ending the inequalities that women and girls face globally.

EQUALS. My Dad Was James Brown. I Saw Him Beat My Mom. It's no secret that James Brown had a dark side. This summer's biopic Get On Up left out many of the weird, uncomfortable, and simply violent incidents that Brown instituted or participated in. But it wasn't until now that we've been able to get a look at just how frightening the singer could be. Fannies, feminism and why girls rule the world with Girls Only. The brainchild of coral-haired beauty Antonia Marsh, Girls Only is a studio residency programme, curatorial body, gallery and event space, aimed at supporting the work of female artists and creatives in London and New York.

Putting the grrrl in girl power – sorry no boys allowed – last week this group of bright young things transformed one of the empty units in Old Street Underground Station into a temporary exhibition space. Featuring the work of 12 female artists including Shrimps’ Hannah Weiland and photographer Bella Howard, the space was a shrine to girlhood, friendship, and great art. We caught up with Antonia to talk about fannies, feminism, and why girls rule the world. Where did the idea for a girls only collective come from? Columbia University Student Protests Sexual Assault. Todas somos jennifer lawrence. This is why you shouldn't click on the naked photos of Jennifer Lawrence. Jennifer Lawrence's agent has confirmed the photos are real and a complete violation of the star's privacy. Photo: Mike Marsland In what’s being called the biggest celebrity hacking incident in internet history, more than 100 female celebrities have had their private nude images stolen and published online.

The bulk of the images posted have been officially confirmed as belonging to Jennifer Lawrence, but a complete list of victims’ names - including Krysten Ritter, Kate Upton, Mary Elizabeth Winstead, Rihanna, Brie Larson and Kirsten Dunst - has been subsequently published. (Link does not contain pictures, only names.) The images were first uploaded by an anonymous member of the underground internet sewer known as 4chan and have since been enthusiastically shared across platforms like Reddit and Twitter.

I was raped at university. Afterwards, the Police pressured me into dropping charges. Why? - Comment. In my first term of my second year at Oxford University, I was raped while passed out in my bed. Yes, my unconsciousness was due to alcohol. Desperate to learn how to play poker, I had invited some friends over to teach me, one of whom brought two companions. Poker rapidly descended into a drinking game. Being both bad at poker and intolerant of alcohol, I ended up passing out.

“Me gustas. 'Even If You Don't Like It, You're Supposed to Appear That You Do' - Noah Berlatsky. Writer and activist Feminista Jones talks about street harassment against black women and the #YouOKsis campaign. This Woman Has Been Confronting Her Catcallers — And Secretly Filming Their Reactions. 10 sexist scenarios that women face at work. I'm Not a Tart: The Feminist Subtext of Steinbeck's <i>Of Mice and Men</i>  In Praise of ‘Fake’ Women. Women Spend Nearly an Hour More Per Day on Chores Than Men - Olga Khazan. Elliot Rodger and Poisonous Ideals of Masculinity - Noah Berlatsky. Sec. Hillary Clinton Defends Reproductive Rights and Family Planning. Why I Filmed My Abortion. Emily Letts Abortion Video Cosmopolitan - Pro-Choice. Could College Rankings Solve the Campus Rape Crisis? - Sarah Mimms. My wife was murdered by a 'monster' – but most perpetrators of violence are normal men.

Chivalry Is Dead For Fat Girls. Terry Richardson Sexual Harassment - Model Alliance. Women should not accept street harassment as 'just a compliment' Cómo ser lesbiana en Hollywood. How women will dominate the workplace BRIC by BRIC. Emily Nussbaum: How “Sex and the City” Lost Its Good Name. Silly As An Insult, Men Belittling Women. Silly As An Insult, Men Belittling Women. Summer’s Eve’s New Commercial Is Unabashedly Sexist. What An Actor Said To Ellen Is Something I Wish More Men Would Talk About. Why I Don’t Just Go to the Cops.