Childhood Guilt, Adult Depression? Health New research shows differences in the brains of kids who show excessive guilty behavior, which may put them at risk for a host of mood disorders later in life. 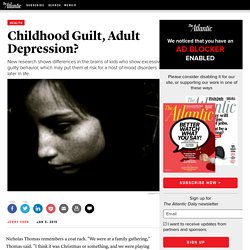 Handwriting vs typing: is the pen still mightier than the keyboard? In the past few days you may well have scribbled out a shopping list on the back of an envelope or stuck a Post-it on your desk. 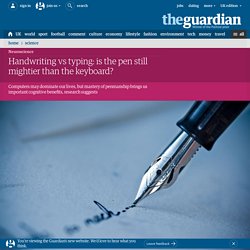 Perhaps you added a comment to your child’s report book or made a few quick notes during a meeting. But when did you last draft a long text by hand? How long ago did you write your last “proper” letter, using a pen and a sheet of writing paper? Does Homeland sensationalise Carrie Mathison's bipolar disorder? I’ve never had my bipolar medication switched for LSD by a national intelligence agency – not to my knowledge, at least – but in last night’s episode of the political thriller Homeland, CIA operative Carrie Mathison dealt with the fallout from exactly that. 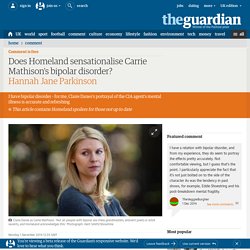 After taking a back seat for most of Homeland’s fourth season, Carrie’s mental illness has returned to the central plot. I am often asked, as someone who has the illness, what I think of Claire Danes’s portrayal of Carrie’s bipolar disorder. How to Get People to Like You: 7 Ways From an FBI Behavior Expert. Science Shows Something Surprising About People Who Love to Write. DAVOS, Switzerland — In an exclusive interview on Friday, British Prime Minister David Cameron told Mic that defeating is "the battle of our generation. 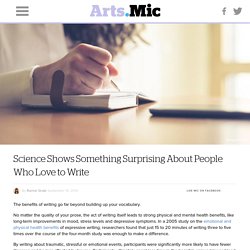 " "For many in your audience, I think this is something people really need to understand, the scale of the threat that we face," Cameron said. "It's the battle of our time. " In a wide-ranging foreign policy conversation with Mic at the annual meeting of the World Economic Forum, Cameron sketched out his vision on a series of issues, including the fight against global terrorism, the war in Syria and the refugee crisis. Cameron said that he and President Barack Obama are working "very closely together" and are "one and the same" in their approach to defeating the Islamic State, also known as ISIL, ISIS or Daesh. The Alarming New Research on Perfectionism. Perfectionism is a trait many of us cop to coyly, maybe even a little proudly. 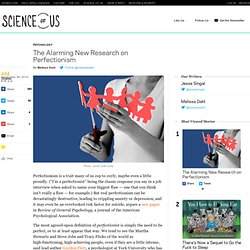 (“I’m a perfectionist” being the classic response you say in a job interview when asked to name your biggest flaw — one that you think isn’t really a flaw — for example.) But real perfectionism can be devastatingly destructive, leading to crippling anxiety or depression, and it may even be an overlooked risk factor for suicide, argues a new paper in Review of General Psychology, a journal of the American Psychological Association.

The most agreed-upon definition of perfectionist is simply the need to be perfect, or to at least appear that way. Why We Laugh. Robin Williams, depression and the complex causes of suicide. As the tributes to the actor and comedian Robin Williams continue, so too do the arguments over the meaning of his death. 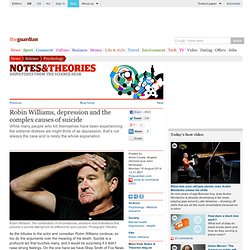 Bulimia Eating Disorder Photo Series - Bad Day. Jo, 21, is bulimic. How I Live With Addiction Every Day: Amber Valletta. Eating Disorder Recovery Photo Series-Anorexia, Bulimia. When we talk about disordered eating, the conversation usually centers around what it's like to suffer from one. 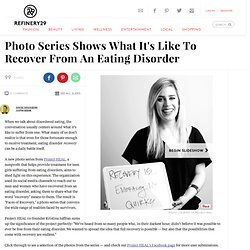 What many of us don't realize is that even for those fortunate enough to receive treatment, eating disorder recovery can be a daily battle itself. A new photo series from Project HEAL, a nonprofit that helps provide treatment for teen girls suffering from eating disorders, aims to shed light on this experience. The organization used its social media channels to reach out to men and women who have recovered from an eating disorder, asking them to share what the word "recovery" means to them. The result is "Faces of Recovery," a photo series that conveys the wide range of realities faced by survivors. Hangovers, Why - Olga Khazan. The cause of hangovers isn't what you think—and other insights from a new group that researches a very old problem. 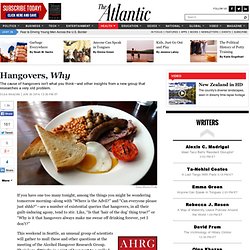 If you have one too many tonight, among the things you might be wondering tomorrow morning–along with “Where is the Advil?” And “Can everyone please just shhh?” What Happens When You Trust Too Much - Tolly Moseley. For people who are pathologically innocent, as is often the case in Williams Syndrome, how do you hold down a job? 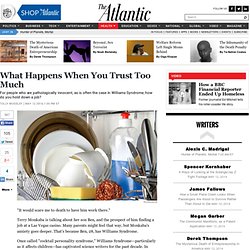 "It would scare me to death to have him work there. " Terry Monkaba is talking about her son Ben, and the prospect of him finding a job at a Las Vegas casino. Many parents might feel that way, but Monkaba's anxiety goes deeper. Psychopaths: how can you spot one? But is psychopathy a disorder – or a different way of being? 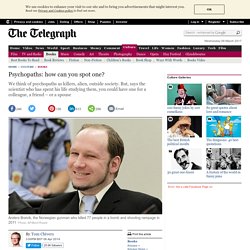 Anyone reading the list above will spot a few criteria familiar from people they know. On average, someone with no criminal convictions scores 5. “It’s dimensional,” says Hare. “There are people who are part-way up the scale, high enough to warrant an assessment for psychopathy, but not high enough up to cause problems. Often they’re our friends, they’re fun to be around. You are not alone: student stories of mental health. When I asked students to share their experiences of mental health at university, I had no idea of the reaction it would receive. Over five days we received over 200 stories.

Many entries we weren't able to include, for legal reasons or because the experiences described were too harrowing to publish. How to Find out Anything from Anyone. The Dark Side of Emotional Intelligence - Adam Grant. Some of the greatest moments in human history were fueled by emotional intelligence. When Martin Luther King, Jr. presented his dream, he chose language that would stir the hearts of his audience. “Instead of honoring this sacred obligation” to liberty, King thundered, “America has given the Negro people a bad check.” He promised that a land “sweltering with the heat of oppression” could be “transformed into an oasis of freedom and justice,” and envisioned a future in which “on the red hills of Georgia sons of former slaves and the sons of former slave-owners will be able to sit down together at the table of brotherhood.”

Delivering this electrifying message required emotional intelligence—the ability to recognize, understand, and manage emotions. Dr. Recognizing the power of emotions, another one of the most influential leaders of the 20th century spent years studying the emotional effects of his body language. Leaders who master emotions can rob us of our capacities to reason. Can You Call a 9-Year-Old a Psychopath? Life as a Nonviolent Psychopath - Judith Ohikuare. In 2005, James Fallon's life started to resemble the plot of a well-honed joke or big-screen thriller: A neuroscientist is working in his laboratory one day when he thinks he has stumbled upon a big mistake.

He is researching Alzheimer's and using his healthy family members' brain scans as a control, while simultaneously reviewing the fMRIs of murderous psychopaths for a side project. It appears, though, that one of the killers' scans has been shuffled into the wrong batch.