Alcohol and drug use

Nitrous oxide users unaware of health risks, nurses warn. Young people who use nitrous oxide, commonly known as “laughing gas”, to get high are running huge risks with their health, including paranoia, breathing problems and even death, nurses have warned. 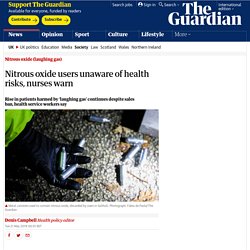 Inhaling nitrous oxide is so dangerous that ministers need to launch a high-profile campaign to alert users to the potentially disastrous consequences, frontline NHS nurses say. The drug, also known as “noz” and “hippy crack”, is very popular with teenagers and young adults, including clubbers and those attending music festivals. It is the same substance that is given to women during childbirth and patients undergoing dental treatment to control pain. Those using it illicitly often breathe it in after it has been transferred from silver vials into balloons. It is the second most commonly used drug among 16- to 24-year-olds in England after cannabis. “Despite the increasing use of nitrous oxide, particularly among younger people, far too few people know about the risks.

'Laughing gas' teenager dies after party in Bexley - BBC News. A teenager believed to have taken so-called laughing gas at a party in south-east London has died. 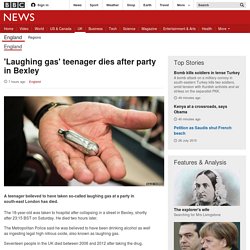 The 18-year-old was taken to hospital after collapsing in a street in Bexley, shortly after 23:15 BST on Saturday. He died two hours later. The Metropolitan Police said he was believed to have been drinking alcohol as well as ingesting legal high nitrous oxide, also known as laughing gas. Seventeen people in the UK died between 2006 and 2012 after taking the drug. The teenager's next of kin have been informed. "At this stage the death is being treated as unexplained pending the findings of the post-mortem," a Met spokesman said. The government plans to ban the sale of legal highs, which would include nitrous oxide. The gas - inhaled using a balloon - can make people feel relaxed, euphoric and giggly, which has led to its nickname. But abusing nitrous oxide can lead to oxygen deprivation, resulting in loss of blood pressure, fainting and even heart attacks. Smoking 'may play schizophrenia role' - BBC News. Smoking could play a direct role in the development of schizophrenia and needs to be investigated, researchers say. 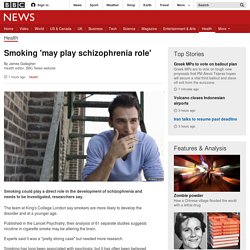 The team at King's College London say smokers are more likely to develop the disorder and at a younger age. Published in the Lancet Psychiatry, their analysis of 61 separate studies suggests nicotine in cigarette smoke may be altering the brain. Experts said it was a "pretty strong case" but needed more research. How dangerous are legal highs? Q&A.

Five students are being treated in hospital after apparently taking a synthetic cannabis-like drug. 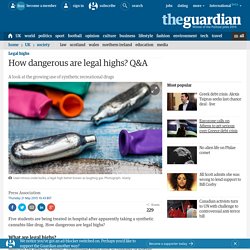 How dangerous are legal highs? What are legal highs? Legal highs are recreational drugs which contain chemical substances that replicate the effects of harder, criminalised highs such as cannabis or ecstasy. They can come in the form of stimulants, depressants or even hallucinogenic drugs. Legal Highs. Scientists issue call for urgent controls on e-cigarette sales to children. Scientists have called for urgent controls on the promotion and sale of e-cigarettes to children after finding high rates of usage among secondary school pupils in the region. 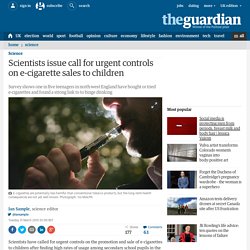 In a survey of more than 16,000 teenagers in north-west England, the researchers found that one in five students aged 14 to 17 had bought or tried e-cigarettes. Many of those who dabbled with vaping were already regular smokers. Alcohol units. We're supposed to be keeping an eye on how much we drink, but how many of us really know what a unit of alcohol is? 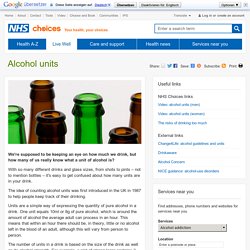 With so many different drinks and glass sizes, from shots to pints – not to mention bottles – it's easy to get confused about how many units are in your drink. The idea of counting alcohol units was first introduced in the UK in 1987 to help people keep track of their drinking. Units are a simple way of expressing the quantity of pure alcohol in a drink. One unit equals 10ml or 8g of pure alcohol, which is around the amount of alcohol the average adult can process in an hour. This means that within an hour there should be, in theory, little or no alcohol left in the blood of an adult, although this will vary from person to person.

The number of units in a drink is based on the size of the drink as well as its alcohol strength. See the table below for more examples of drinks and units Calculating units Strength (ABV) x Volume (ml) ÷ 1,000 = units. Illegal drugs - what parents need to know- Family Lives. As a parent, it's important to understand why your child might experiment with drugs and the risks and harms associated with the most commonly-used illegal substances. 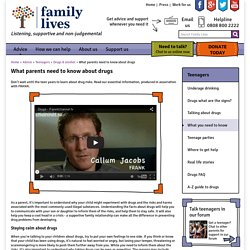 Understanding the facts about drugs will help you to communicate with your son or daughter to inform them of the risks, and help them to stay safe. It will also help you keep a cool head in a crisis - a supportive family relationship can make all the difference in preventing drug problems from developing. Staying calm about drugs When you're talking to your children about drugs, try to put your own feelings to one side. If you think or know that your child has been using drugs, it's natural to feel worried or angry, but losing your temper, threatening or scaremongering is more likely to push them further away from you. Set aside your assumptions and pre-conceived ideas and listen to what your child has to say. Stress Busters: Some drugs, such as cannabis, can make users feel relaxed. Legal highs The effects and risks. Talking to teens about drugs - Family Lives. Underage drinking - Family Lives.

Aside from the health risks associated with underage drinking, drinking to get drunk - as many teens do - means huge numbers are risking their sexual health. 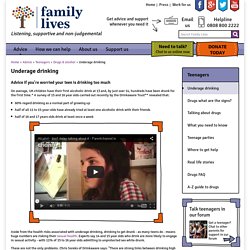 Experts say 14 and 15 year olds who drink are more likely to engage in sexual activity - with 11% of 15 to 16 year olds admitting to unprotected sex while drunk. These are not the only problems. Chris Soreks of Drinkaware says: "There are strong links between drinking high levels of alcohol and youth offending, teenage pregnancy, truancy and exclusion from school.

" Teenage parties - Family Lives. When your teen asks to have friends to sleep over – maybe after a party – or asks to sleep over at a friend’s with a group of other teens, your first response may be a downright NO. 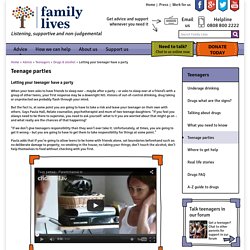 Visions of out-of-control drinking, drug taking or unprotected sex probably flash through your mind. But the fact is, at some point you are going to have to take a risk and leave your teenager on their own with others. Says Paula Hall, Relate counsellor, psychotherapist and mum of two teenage daughters: “If you feel you always need to be there to supervise, you need to ask yourself: what is it you are worried about that might go on – and what really are the chances of that happening? “If we don’t give teenagers responsibility then they won’t ever take it. How I Live With Addiction Every Day: Amber Valletta.