A promising study suggests teachers can train 8-year-olds in Theory of Mind – Research Digest. By Christian Jarrett Theory of Mind is psychologist-speak for our ability to put ourselves in other people’s shoes, to recognise that their thoughts and beliefs can be different from our own. 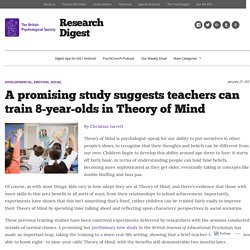 Children begin to develop this ability around age three to four: it starts off fairly basic, in terms of understanding people can hold false beliefs, becoming more sophisticated as they get older, eventually taking in concepts like double bluffing and faux pas. Of course, as with most things, kids vary in how adept they are at Theory of Mind, and there’s evidence that those with more skills in this area benefit in all sorts of ways, from their relationships to school achievement. Intersubjectivity and Mirror Neurons. Uta Frith on how much we have learned about autism, but how much more there is still to understand. There is a second “window of opportunity” for learning in late adolescence and early adulthood.

If you want to maximise a person’s intellectual potential, the general consensus for a long time has been that you need to start young. 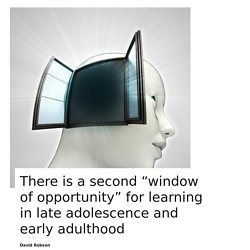 According to this traditional view, early childhood offers a precious “window of opportunity” or “sensitive period” for learning that closes slowly as we reach adolescence. It’s the reason that toddlers find it easier to master the accent of a foreign language, for instance. This view that has even shaped educational policy.

If you want to help people from disadvantaged backgrounds, for instance, some psychologists had argued that you would do better to target primary schools, with diminishing returns for interventions later in life, as if badly performing teenagers were something of a lost cause. The ‘classic’ Sally-Anne test: children’s nonverbal responses merit closer consideration. New research from the UCL Knowledge Lab argues that the communicative methods of testers and experimenters in the Sally-Anne test warrant closer consideration. 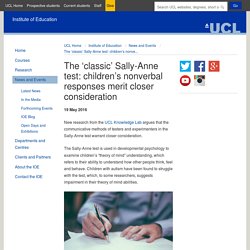 The Sally-Anne test is used in developmental psychology to examine children’s “theory of mind” understanding, which refers to their ability to understand how other people think, feel and behave. Children with autism have been found to struggle with the test, which, to some researchers, suggests impairment in their theory of mind abilities. Wimmerperner. Child’s cognitive skills linked to time spent with mother. It is a question that has troubled parents down the years. 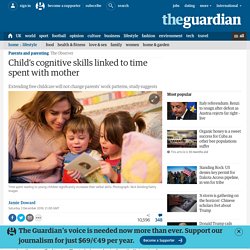 Just how much time should they spend with their children when they are growing up? Now a new study suggests that the answer – at least for mothers – should be as much as they can afford to give. The study, by academics from the University of Essex and University College London, published in this week’s edition of the Economic Journal, finds that a young child’s cognitive and social skills are improved considerably by spending more time with their mother between the ages of three and seven. It also found that first-born children tend to benefit more from an early investment of their mothers’ time than siblings born after them. The study is the first of its kind in the UK – and one of the first in the world – to examine directly the relationship between the time mothers spend with their children and the skills those children go on to develop.