GCSE Bitesize: Darwin's theory of evolution. Fun facts and articles: Skeleton. Print page A bird's skeleton has a tougher job than a mammal's. 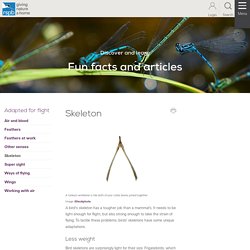 It needs to be light enough for flight, but also strong enough to take the strain of flying. Human Evolution. —By Karen Barss The story of human evolution began in Africa about six million years ago and it describes the very long process that our ancestors went through to ultimately become modern humans. 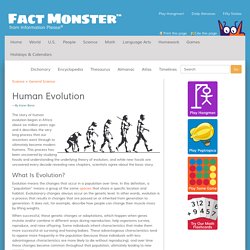 This process has been uncovered by studying fossils and understanding the underlying theory of evolution, and while new fossils are uncovered every decade revealing new chapters, scientists agree about the basic story. What Is Evolution? Evolution means the changes that occur in a population over time. In this definition, a “population” means a group of the same species that share a specific location and habitat.

Anatomy & Physiology. The human skeleton is made up of 206 bones. 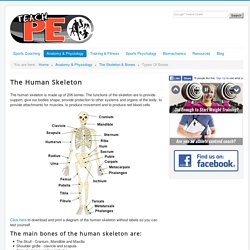 The functions of the skeleton are to provide support, give our bodies shape, provide protection to other systems and organs of the body, to provide attachments for muscles, to produce movement and to produce red blood cells. Click here to download and print a diagram of the human skeleton without labels so you can test yourself. The main bones of the human skeleton are: The origin of birds. The origin of birds The discovery that birds evolved from small carnivorous dinosaurs of the Late Jurassic was made possible by recently discovered fossils from China, South America, and other countries, as well as by looking at old museum specimens from new perspectives and with new methods. 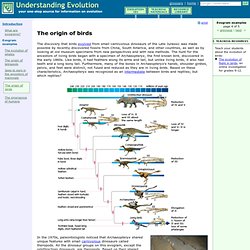 The hunt for the ancestors of living birds began with a specimen of Archaeopteryx, the first known bird, discovered in the early 1860s. Like birds, it had feathers along its arms and tail, but unlike living birds, it also had teeth and a long bony tail. Furthermore, many of the bones in Archaeopteryx's hands, shoulder girdles, pelvis, and feet were distinct, not fused and reduced as they are in living birds. Based on these characteristics, Archaeopteryx was recognized as an intermediate between birds and reptiles; but which reptiles? 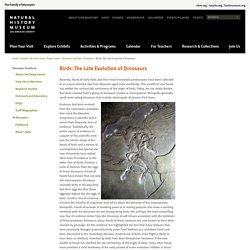 This wealth of new fossils has settled the century-old controversy of the origin of birds. Today, we can safely declare that birds evolved from a group of dinosaurs known as maniraptoran theropods-generally small meat-eating dinosaurs that include Velociraptor of Jurassic Park fame. Evidence that birds evolved from the carnivorous predators that ruled the Mesozoic ecosystems is plentiful and it comes from disparate lines of evidence.