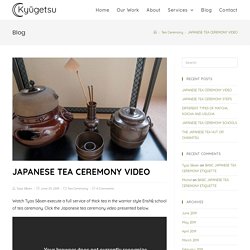 Click the Japanese tea ceremony video presented below. Sōsen employs the daisu grand-sideboard in a large reception room for the preparation of a bowl of tea. The service presented here is the basic winter service of thick tea. The service of tea using the daisu is the most formal and oldest service of Japanese tea ceremony. Many other schools of tea the treat the use of the daisu as ‘hidden transmission’. This video represents just one possible service of tea. The video is a lengthy 40 minutes long. Don’t be surprised. Did I mention that 40 minutes is the common time-frame for any basic service of thick-tea? Use the KonMari Method to Tidy Your Mind. Types of Chaire - uedasokochanoyu.

Untitled. Spreading the Spirit of Tea in Europe: Nojiri Michiko. BookBub - Sign in. Chatoyant College Interlude: Summer Break - 1: Corrie to Edie. Chatoyant College, Book 13: The Teeth - Prologue: Failure. All of his attempts so far had ended in failure. 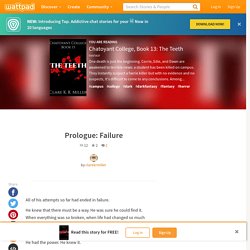 He knew that there must be a way. He was sure he could find it. When everything was so broken, when life had changed so much from one simple decision, how could he not be able to return things to the way they were? He had the power. He knew it. He just needed to try something different. He carefully closed the door to his room and made his way down the dark hall. He walked down the middle of the deserted staircase, careful to avoid the railings. The door opened to his touch. If all went well, no one would notice anything out of place ever again. He walked to the center of campus, carefully measured out from his map and his knowledge of where the borders of the magic lay. It was clear. He took a deep breath and lifted his arms, closing his eyes to the stars, feeling the magic.

He knew that this was the right place to be. Eikasia. Welcome! 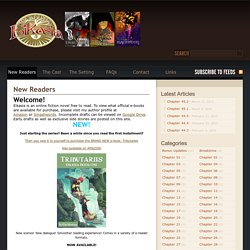 Eikasia is an online fiction novel free to read. To view what official e-books are available for purchase, please visit my author profile at Amazon or Smashwords. Incomplete drafts can be viewed on Google Drive. Early drafts as well as exclusive side stories are posted on this site. Just starting the series? Then you owe it to yourself to purchase the BRAND NEW e-book: Tributaries Also available on AMAZON! New scenes! Update Schedule: Every Sunday. 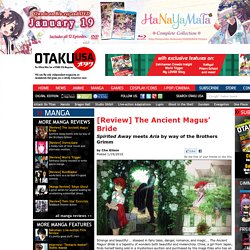 The Ancient Magus’ Bride is a tapestry of wonders both beautiful and melancholy. Chise, a girl from Japan, finds herself being sold in a mysterious auction and purchased by the mage Elias who has an animal skull for a head. The story appears in the August 2015 issue of Otaku USA magazine, which sports a cover feature on Tokyo Ghoul.It's also got features on No Game no Life, Magical Warfare, and more! It's been off newsstands for a while, but you can still get back issues at our online store. Get it before it's gone forever! He tells her she is special and takes her in as his apprentice and future bride.

In her author’s notes for Volume 1 Kore Yamazaki apologizes for not much happening, but there’s nothing to apologize for. The art is beautiful, with lots of detailed characters and monsters. All the characters are given enough uniqueness to stand out, but Elias is amazing. Comments: Popular Stories: Tales of MU.