Druid Tree Lore. Trees in particular were mysterious, and seemed to me direct embodiments of the incomprehensible meaning of life. 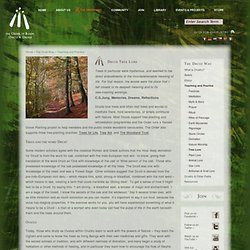 For that reason, the woods were the place that I felt closest to its deepest meaning and to its awe-inspiring workings. C.G.Jung, Memories, Dreams, Reflections Druids love trees and often visit trees and woods to meditate there, hold ceremonies, or simply commune with Nature. The Story of Mankind. World Grid. Ley line. Ley lines /leɪ laɪnz/ are supposed alignments of numerous places of geographical and historical interest, such as ancient monuments and megaliths, natural ridge-tops and water-fords. 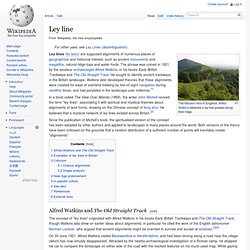 The phrase was coined in 1921 by the amateur archaeologist Alfred Watkins, in his books Early British Trackways and The Old Straight Track. He sought to identify ancient trackways in the British landscape. Watkins later developed theories that these alignments were created for ease of overland trekking by line-of-sight navigation during neolithic times, and had persisted in the landscape over millennia.[1] Since the publication of Michell's book, the spiritualised version of the concept has been adopted by other authors and applied to landscapes in many places around the world.

Mythology. Digital Dead Sea Scrolls. David Sereda. Atlantis or Someone Else? The report is about an Earth based scenario, a combination of the possibilities inherent in a background Earth story, some possible hypotheses by me, and then some visual evidence to add into the mix. Piri Reis map. Surviving fragment of the Piri Reis map showing Central and South America shores. 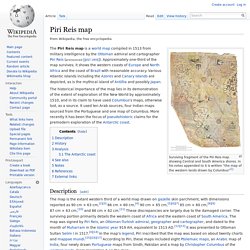 Finaeus Map. The 10 Most Puzzling Ancient Artifacts. The Bible tells us that God created Adam and Eve just a few thousand years ago, by some fundamentalist interpretations. 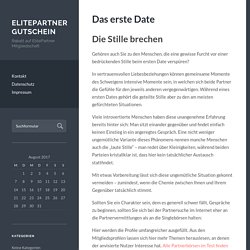 Science informs us that this is mere fiction and that man is a few million years old, and that civilization just tens of thousands of years old. Could it be, however, that conventional science is just as mistaken as the Bible stories? There is a great deal of archeological evidence that the history of life on earth might be far different than what current geological and anthropological texts tell us. Consider these astonishing finds: The best unexplained and unusual historical mysteries.

The Mayan Calendar Portal. Top 10 Most Famous Celebrity Deaths. While most human beings enter and leave this planet with little notice, there are those among us whose passing—especially if untimely—captures headlines. 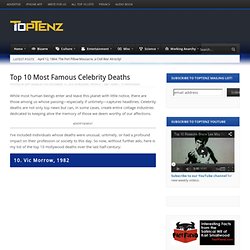 Celebrity deaths are not only top news but can, in some cases, create entire cottage industries dedicated to keeping alive the memory of those we deem worthy of our affections. I’ve included individuals whose deaths were unusual, untimely, or had a profound impact on their profession or society to this day. How Old is the Sphinx? The head of the Sphinx emerging from the sand The Great Sphinx of Giza is one of the most recognizable man-made objects in the world. 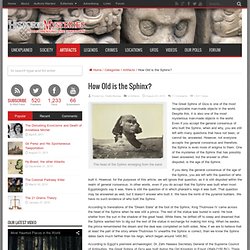 Despite this, it is also one of the most mysterious man-made objects in the world. The Ajanta Caves – Ancient Temples Carved from Rock. Two thousand two hundred years ago work began on an extensive series of cave monuments in Maharashtra, India. 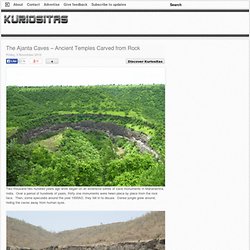 Over a period of hundreds of years, thirty one monuments were hewn piece by piece from the rock face. Then, some speculate around the year 1000AD, they fell in to disuse. Dense jungle grew around, hiding the caves away from human eyes. Top 10 Bizarre & Controversial Archeological Discoveries. Many strange archeological discoveries have been made in modern history. 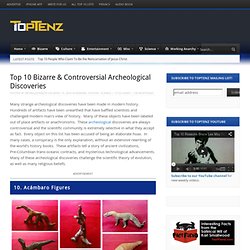 Hundreds of artifacts have been unearthed that have baffled scientists and challenged modern man’s view of history. Many of these objects have been labeled out of place artifacts or anachronisms. These archeological discoveries are always controversial and the scientific community is extremely selective in what they accept as fact. Every object on this list has been accused of being an elaborate hoax. In many cases, a conspiracy is the only explanation, without an extensive rewriting of the world’s history books. 10. Discovered: 1944 Attempts have been made to date these figures using Thermoluminescence, or TL dating, and the results suggested a date around 2500 BCE. 9. Discovered: 1938. Top 10 Dead Persons Still Said To Be Alive After Death.

We’ve all heard of people faking their deaths and later being found to be alive. 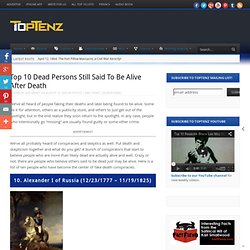 Some do it for attention, others as a publicity stunt, and others to just get out of the spotlight, but in the end realize they soon return to the spotlight. Top 10 Theories about the Lost City of Atlantis. Ever since the famed Greek philosopher Plato first wrote of a fabled continent called Atlantis more than two thousand years ago, scholars have been locked in fierce debate as to whether such a place truly existed. 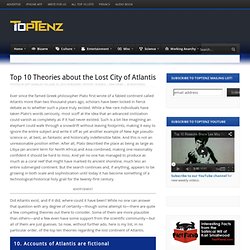 While a few rare individuals have taken Plato’s words seriously, most scoff at the idea that an advanced civilization could vanish as completely as if it had never existed. Such is a bit like imagining an elephant could walk through a snowdrift without leaving footprints, making it easy to ignore the entire subject and write it off as yet another example of New Age pseudo-science or, at best, an fantastic and historically indefensible fable. And this is not an unreasonable position either.

After all, Plato described the place as being as large as Libya (an ancient term for North Africa) and Asia combined, making one reasonably confident it should be hard to miss. Top 10 Lost Cities. A city becomes “lost” when it is abandoned by its inhabitants and left to decay. This can be the result of war, migration, or natural disaster, but in each case these cities can act as a sort of time capsule, leaving a civilization frozen in history and waiting to be discovered.

Top 10 Most Significant Historical Grimoire. Note: TopTenz does not endorse the practice of witchcraft or sorcery, and is pretty glad it’s hard to get your hands on these books because we want y’alls souls to stay sparkly clean. “Let no one be found among you who makes his son or daughter pass through fire, no… an augur or soothsayer or diviner or sorcerer, | none who cast spells or traffics with ghosts and spirits, and no necromancer.”

Deuteronomy 18:10-11 *end editor note The term “grimoire” originated from the Old French word “grammaire” which meant “grammar” and was used to refer to all books that were written in Latin. However, by the 18th century, the term had taken on a new meaning: medieval European magic textbooks. Top 10 Rare and Important Archeological Finds. In archaeology, an artifact is an object recovered which may provide cultural interest and help in the understanding of human history. In the last 100 years, a large collection of important archeological discoveries have been made. Some of these artifacts have helped people understand the origins of life on Earth, while others have presented problems for scientists. Top 10 Most Important Historical Finds.

For as long as there have been civilizations on earth, man has been curious about his ancestors. Our need to connect to our past fuels the study of anthropology and the many important sites and artifacts uncovered through archaeology have opened our eyes to the lives of those that came before us. Top 10 Unexplained Mysterious Disappearances in History. Top 10 Civilizations That Mysteriously Disappeared.

The Mayans reveal their darkest mysteries: New excavation reveals secrets of the Mayan calendar - including black-clad figures and symbols never seen before. Wall covered in calculations relating to Mayan calendarLine-up of men in black uniformsAstrological calculations not fully understoodDates seem to stretch 7,000 years into FUTUREContradicts 'doomsday' predictions about 2012First paintings found on walls in Mayan dwellingsHuge city in Guatemala finally reveals its secrets By Rob Waugh Published: 18:04 GMT, 10 May 2012 | Updated: 10:46 GMT, 11 May 2012 A vast city built by the ancient Mayan civilisation and discovered nearly a century ago in modern day Guatemala is finally starting to yield its secrets - including a hint that apocalyptic predictions around the 'end' of the Mayan Calendar may be wrong. The 10 Most Puzzling Ancient Artifacts. Archeology, Ancient Texts, Folklore, Mythology, and how it does indeed relate back to the Spiritual realm.