Schools: Educational resources from the BBC. What is connectivism? In my last two posts on connectivism (here and here) I've alluded to but not made particularly explicit what I think connectivism actually is, even though I have been critiquing and exploring its boundaries. 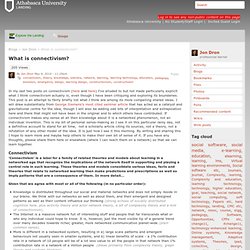 This post is an attempt to fairly briefly list what I think are among its more compelling shared ideas. I will draw substantially from George Siemens's most cited seminal article that has acted as a catalyst and gravitational centre for the idea, though I will also be adding odd bits of interpretation and extrapolation here and there that might not have been in the original and to which others have contributed. If connectivism makes any sense at all then knowledge about it is a networked phenomenon, not an individual invention. 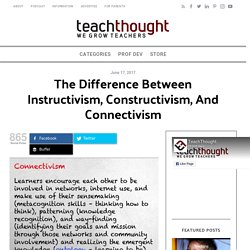 Better policies. Better technology. Better standards. Better curriculum. Better instruction. Better assessment. Better response to assessment data. Bloom (Krathwohl and Anderson) and Web 2.0. Distributed Cognition. “The emphasis on finding and describing “knowledge structures” that are somewhere “inside” the individual encourages us to overlook the fact that human cognition is always situated in a complex sociocultural world and cannot be unaffected by it.” 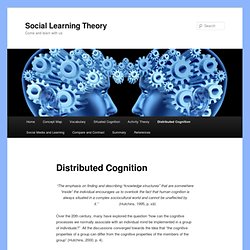 (Hutchins, 1995, p. xiii) Over the 20th century, many have explored the question “how can the cognitive processes we normally associate with an individual mind be implemented in a group of individuals?” All the discussions converged towards the idea that “the cognitive properties of a group can differ from the cognitive properties of the members of the group” (Hutchins, 2000, p. 4). Ed Hutchins has spent his “academic carreer trying to understand human cognition in social, cultural and material context”. He “believe[s] that cultural practices are a key component of human cognition”. Therefore, using insights from sociology, cognitive science, and the psychology of Vygotsky, the theory emphasizes the social aspects of cognition. Figure A ( Tree. Looking for Strategies and Activities? 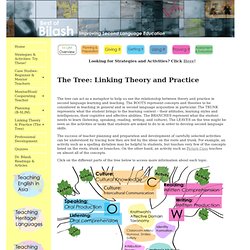 Click Here! The tree can act as a metaphor to help us see the relationship between theory and practice in second language learning and teaching. The ROOTS represent concepts and theories to be considered in teaching in general and in second language acquisition in particular. The TRUNK represents what the student brings to the learning context – their attitudes, learning styles and intelligences, their cognitive and affective abilities. The BRANCHES represent what the student needs to learn (listening, speaking, reading, writing, and culture). The success of teacher planning and preparation and development of carefully selected activities can be understood by tracing how they are fed by the ideas on the roots and trunk. Click on the different parts of the tree below to access more information about each topic.

When to Use Social Media for Learning. Workplace learning professionals should focus on how social learning - and its associated tools - can help achieve business goals. 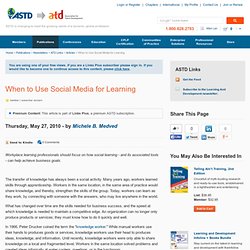 The transfer of knowledge has always been a social activity. Many years ago, workers learned skills through apprenticeship. Workers in the same location, in the same area of practice would share knowledge, and thereby, strengthen the skills of the group. Today, workers can learn as they work, by connecting with someone with the answers, who may live anywhere in the world.

What has changed over time are the skills needed for business success, and the speed at which knowledge is needed to maintain a competitive edge. In 1966, Peter Drucker coined the term the "knowledge worker. " As organizations became larger, global, and more complex, it became less likely to find knowledge in next office - or when it was needed. Looking at the big picture As learning professionals, it is easy to focus the discussion on social learning on the tools, known as social media.