I really need to put this together...

Facts & Rumors about Pokemon Go. Blind Man With Winning Lottery Ticket Asks Strangers If He Won To Test Their Honesty - helloU. Social experiments are all the craze right now. 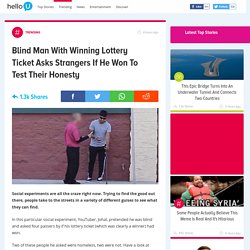 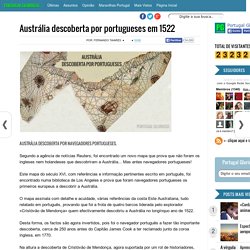 The Sheahan family has been bombed, shot at, and intimidated for 60 years living near Area 51 in the Nevada Desert, but they are refusing to give up their land to the “neighbours from hell.” 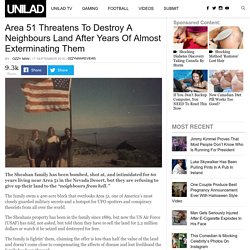 The family owns a 400 acre block that overlooks Area 51, one of America’s most closely guarded military secrets and a hotspot for UFO spotters and conspiracy theorists from all over the world. The Sheahans property has been in the family since 1889, but now the US Air Force (USAF) has told, not asked, but told them they have to sell the land for 5.2 million dollars or watch it be seized and destroyed for free. The family is fightin’ them, claiming the offer is less than half the value of the land and doesn’t come close to compensating the affects of disease and lost livelihood the family has been through. 19 Struggles Only People Who Don't Drink Tea Will Understand.

41 Ways To Reuse Your Broken Things. Pin by Lisa Dildil on Quotes. Quirky Video Game Lamps. Mary Poppins remake in the works as Disney brings back the supernanny for another film. Mary Poppins is returning to the big screen. 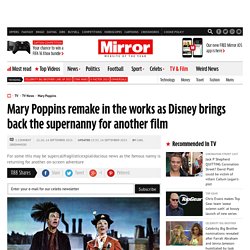 The original supernanny - with her magic powers, flying umbrella and frankly amazing luggage - will once again return to the big screen as Disney is working on a new project based on the character who was played by Julie Andrews in the original. Mary's new adventure will reportedly be set 20 years after the original according to the Hollywood Reporter. 17 Reasons Lily From "Modern Family" Is A Role Model To All Women. Can You Name All 151 Original Pokémon. 11987040_10152992090866610_2122052243681662760_n.jpg (JPEG Image, 960 × 960 pixels) Crash Bandicoot Was Released 19 Years Ago Today So We Took A Look Back At The Game's Legacy.

On this day 19 years ago one of the most iconic games in history was released – Crash Bandicoot. 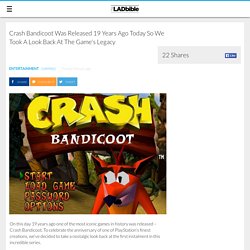 To celebrate the anniversary of one of PlayStation’s finest creations, we’ve decided to take a nostalgic look back at the first instalment in this incredible series. Many of us have fond memories of our first games console, whether it was a Sega, Nintendo 64 or the PlayStation 1. We’d spend hours and hours trying to conquer various challenges and bosses, avoiding our homework in the process, and there was no game more memorable for that than Crash Bandicoot. In the original game, playing as Crash, you’d travel through three separate islands and beat numerous enemies in order to try and defeat Crash’s creator Doctor Neo Cortex (or Dr. Cortex for short) and save his girlfriend Tawna. This game would set the standard for future Crash games with a number of features originating on those very first mysterious islands. There were an astronomical 33 levels that were divided among N. Quotes&Words&Musics. Photo. Taylor Swift Announces That She Is Willing To Be Kanye's Vice President After Rapper Sends Her A Shit-Ton Of Flowers.

During Kanye West’s bizarre acceptance speech after winning the Video Vanguard Award at this year’s VMAs, the eccentric rapper announced that he was running for President of the United States in 2020. 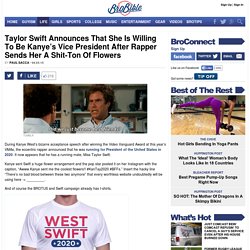 It now appears that he has a running mate, Miss Taylor Swift. Kanye sent Swift a huge flower arrangement and the pop star posted it on her Instagram with the caption, “Awww Kanye sent me the coolest flowers!! Death Metal Mary Poppins Is Way Better Than Regular Mary Poppins. No need to panic - the boring, old version of Supercalifragilisticexpialidocious (totally spelled that from memory, definitely didn't need to Google it) has finally been replaced by the version it was meant to be: DEATH METAL. 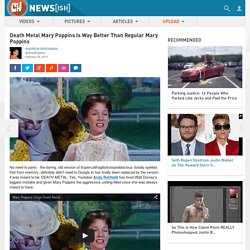 Yes, Youtuber Andy Rehfeldt has fixed Walt Disney's biggest mistake and given Mary Poppins the aggressive, yelling-filled voice she was always meant to have. A spoonful of sugar makes the POISON GO DOWN, GOD IS DEAD For more instances of heavy metal finally making a comeback: Heavy Metal Batman Check Out This Heavy Metal Baby Heavy Metal Construction Worker. 11950755_1667349133510346_1786682726_n.jpg (JPEG Image, 720 × 673 pixels) 'Real-Life Pokemon' Is Coming To Mobile And It Looks Brilliant. Remember when you were a kid and the most important thing in your life was your Pokédex? 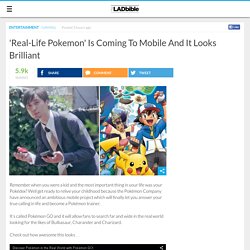