21 Photos That Are Way Too Real For Anyone Who's Been Hungover At Work. 31 Throw Pillows That Will Trick People Into Thinking You're An Adult. 23 Mercifully Easy-To-Make Snacks Your Kids Will Love. 14 Things We Learned From. Captain Weebaloids. If JK Rowling Told the Harry Potter Books From Voldemort's POV. "Randy Orton v Superman - Dawn of the RKO" Is The Mashup You Never Know You Wanted - 9GAG.tv. 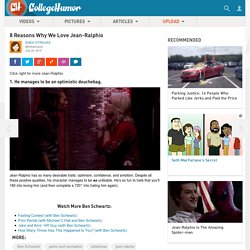 He manages to be an optimistic douchebag. Jean-Ralphio has so many desirable traits: optimism, confidence, and ambition. Despite all these positive qualities, his character manages to be so unlikable. 17 Faces Everyone With A Big Family Will Know. 24 Things That No One Tells You About Moving Out Of London. 22 Accurate Struggles Of Growing Up Painfully Shy. 17 Reasons Being The Oldest Sibling Is The Goddamn Best. 25 Tattoos That Will Transport You To The 1990s. Made me smile. Thanks, gratitude and love. Pin by ellie on Just Awesome. 17 Things You Experience When You're Just "Talking" To Someone. 17 "30 Rock" Products That'll Make You High Five A Million Angels. Non-Sloths React To Common Sloth Things. 51 Books All Animal Lovers Should Read. 21 Pictures That Will Take You Straight Back To The '00s. 23 Things We Saw At Today's Reclaim Australia And Anti-Racism Rallies - BuzzFeed News.

This Guy's Instagram Account About Being A Third Wheel Is Heartbreakingly Hilarious. 12 Things That Make Women Creepy According To Real Guys. Artist uses spilled food as paint to make beautiful artworks. While most people would see a coffee spill as a mess, Giulia Bernardelli from Italy sees it as art. 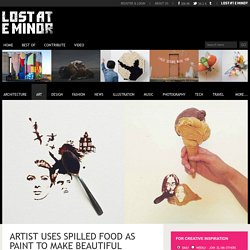 The 27-year-old artist uses spilled food items like coffee, chocolate, ice cream, and even what looks like baby food, to make paintings. With these edible paints in hand, Bernardelli uses an unconventional paintbrush that’s most fitting for the medium: a spoon. She then manipulates the spilled food into images of pirate ships, portraits, and whimsical scenarios. In an interview with the Huffington Post, she even adds that she doesn’t plan these ephemeral pieces and instead, does them spontaneously. ‘When I drink coffee, I reflect on the nuances that I could create if I flipped it on the table. Squirrel sneaks into a bar, gets drunk, destroys everything. At a private members club in Worcestershire, England, a squirrel went nuts and destroyed about $470 in property after it got inside the premises and helped itself to a few pints of beer. 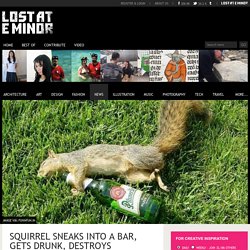 Sam Boulter, the secretary at the Honeybourne Railway Club, showed up for work last Sunday and found the place in absolute chaos. Beer was flooding the floor, as well as shattered glass and tissues scattered all around. At first he thought the culprit was a burglar, but then the real mastermind showed up, drunkenly staggering out of a box of crisps. Boulter and two other customers would chase the squirrel for an hour before catching it with a waste paper bin and sending it out the window. No charges were filed against the squirrel, we assume. ‘I’d never seen anything like it before – he had ran around the shelves and across the bar’, Boulter said. Pornogami: a book on how to make adult-themed origami sculptures. Awesome! Newspaper prints simple cartoons of the Foo Fighters' concert to protest their bizarre photo contract. Historians find Yoda on a 14th century-old manuscript about medieval monsters. Two words: Ancient Aliens! 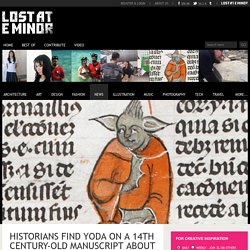 In a galaxy far, far away, – or at The British Library, rather – two historians found an illustration of a creature inside a 14th century manuscript, and it oddly looks like a famous Jedi master. While researching for his book, Medieval Mosters, historian Damien Kempf and colleague Maria L. Gilbert found Yoda inside the pages of the centuries-old manuscript. ‘When I came across this monster, I actually couldn’t believe it’, Kempf told BBC Radio.

‘It’s a manuscript that was produced 700 years ago’. While we’d all like to believe little green aliens actually existed, The British Library’s blog curator Julian Harrison, believes otherwise. Pffft, like we’re actually going to believe that cover up story about Jedis not existing. Heavy metal music is being used to attract sharks in Australia. Guy makes art by painting on his hand then stamping it on paper. I guess you could say this guy’s paintings are all… handmade? 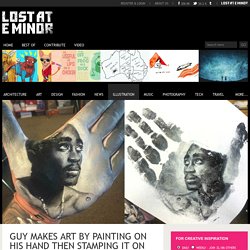 California-based teacher and artist Russell Powell creates realistic black-and-white portraits. Though instead of painting directly onto a canvas, he first paints the images on his palm. Called ‘hand-stamping’, the technique involves Powell painting on his palm before using it as a stamp to transfer the portrait onto paper. As you might you imagine, this involves a bit of mastery, as the uneven surface of human skin increases the level of difficulty (it’s even harder if he has shaky hands).

And if that’s not challenging enough, he also has to work fast enough to keep the painting from drying up. Once transferred onto paper, the finished works show a mirrored version of the portraits, as well as Powell’s very personal signature: his fingerprints. Via Ufunk. This 22-Year-Old Model Has The Funniest Instagram In Fashion. 22 Signs You've Found Your Soulmate In Your BFF. 7 Steps for Surviving an Internet Outage. BuzzFeed.

12 Ghosting Stories That Will Make You Never Want To Date Again. This Tiny Ant Traffic Jam Is Hilarious. War of the Atoms... Troll dad texts his son. Evolution in Science... Thor knows best... Cool Life Hacks... Someone had to say it. Woman Shopping Logic... Yoda's graduation photo... The joke is on you... How the world sees Jamaica...

11 Times Big Businesses' Tweets Were Way Funnier Than Yours. The 9 Best Lines From The First "Deadpool" Footage. Here's Why "Pepper Ann" Was The Most Underrated Cartoon From Your Childhood. There Are Minion Menstrual Pads For Sale On Etsy So Let's Burn The World Down. 29 Rude, Strange, And Dumb Questions People Have Been Asked About Scotland. Funny pictures - funny photos - funny images - funny pics - funny quotes - #lol #humor #funnypictures. Not Adequate For Drunks. This Explains It. Looks Like A Win For That Cat. This Guy, I Like This Guy. When I Pretend To Have Musical Taste. Dog Looks Awesome, Though. Microsoft's App Is Really Funny.

Monster Under My Bed. Ultimate 'Beware Of The Dog' Sign. Gets Funnier Every Time I See It. Everything I Need In One Place. President Cat Is On It. Math Teacher Expectations. 19 Times Twitter Hated Facebook (and It Was Hilarious) Which "Harry Potter" Death Affected You The Most. 21 Pictures To Put You In A Better Mood. It’s on days like this when you’re not really doing anything significant that you realise you’re a tiny bit fed up. 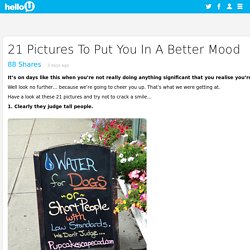