Funny Quotes and Captions from Tumblr (54 Photos) MINIMINTER BEST MOMENTS! 19 Reasons Why You Should Never Be Embarrassed Again In Your Life. BEHOLD! Every Punch, Fight, Brawl, Stampede And Complete Chaos From Black Friday 2015 (VIDEO) How I Met Your Mother - Bloopers / Behind the Scenes. Cyanide & Happiness - All Classics Shorts. The Office - Season 2 - Every Opening Scene. The Office - That's What She Said Quotes. CARDS AGAINST HUMANITY. Qwertee : Limited Edition Cheap Daily T Shirts. Women Revealed The Worst Things Guys Said To Them After Sex And It's All Hilariously Cringeworthy. What’s the weirdest thing you have ever said to a woman before or after sex? 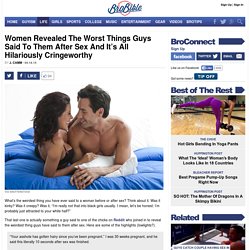 Think about it. Was it kinky? Was it creepy? Was it, “I’m really not that into black girls usually. I mean, let’s be honest: I’m probably just attracted to your white half?” That last one is actually something a guy said to one of the chicks on Reddit who joined in to reveal the weirdest thing guys have said to them after sex. “Your asshole has gotten hairy since you’ve been pregnant.” He was looking at me and said “You know, I wanted to keep doing this regularly but you reeeeeally look alot like my sister..

He’d just finished and I hadn’t, he rolled over and said: ‘you know my ex always used to orgasm 10 times’ What do you say to that? “Do you think I should wipe my butt better? One of the first times I had done anal.. after we finish, he pulls out and just sort of says, “Oh god,” under his breath. I’d hooked up with this guy a few times before. I farted while we were doing it. Jesus Christ. Gaping. Pokemugs // funny pictures - funny photos - funny images - funny pics - funny quotes - #lol #humor #funnypictures. Tumblr Gets Deep (20 Pics) Kanye West's Yeezy Season 2 Fashion Show Was A Sight To Be Seen. 27 Secrets Pub Servers Will Never Reveal.

This Hilarious Harry Potter Comic Shows Why Snape Always Sucked. 22 Grilled Cheese Sandwiches That Look So Good You'll Start To Sweat. If Ashley Madison Passwords Were Motivational Posters. Types Of Co-Workers That Are The Absolute Worst. 24 People Who Have Simply Stopped Caring. 31 Reasons The World Is Definitely Ending Soon. How Well Do You Remember '90s Alt Rock Music Videos.

15 All Too Real Situations Every Dog Owner Will Understand. Headline Not Found. Retry? Login Failbook Channels Cheezburger Channels Upvoted History Has a Way of Destroying Itself How Many Times Do I Have to Tell You People? 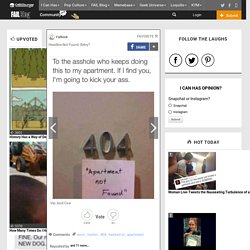 A Tough Day at the Gym Seems Legit Awww, Bless If You Are Gonna Learn How to Play an Instrument, You Best Own It They're Coming For You Here, Catch! And No, We're Not Removing the Sign Failbook Favorite Headline Not Found. Via: Acid Cow Repost Create a Site Recaption Comments Reposted by and 71 more... Like this? You must be logged in to comment 0 comments Sign in 2 people listening + Follow. This library by the sea appears to be bottomless when you look down. In Denmark, Swedish artist Susanna Hesselberg has put up an installation that every book worm would love: a bottomless library. 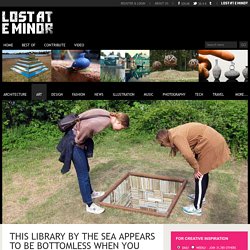 Made for the biannual ‘Sculpture by the Sea’, the artwork features book shelves seemingly plummeting into an endless hole. Though viewers are forbidden to enter the dark shaft, they can pique their curiosity by peeking through a glass window. Entitled ‘When My Father Died It Was Like a Whole Library Had Burned Down’, the library commemorates the passing of Hesselberg’s father and is a reflection of the sinking feeling she felt at the time. Via This Is Colossal. 25 People Who Are Doing It Wrong.

Watch This Baby Adorably Prank Her Dad By Fake Crying As He Tries To Cut Her Nails. A Dad Turned All The Ridiculous Things He Ends Up Saying To His Kids Into A Book. Top 5 - Guilty pleasures in gaming. 19 Tumblr Posts That Accurately Describe What It's Like To Be A Picky Eater. 21 Signs You Took High School Way Too Seriously. Can You Guess The "Harry Potter" Film By Its Title Credit. What Video Games Are These Cheat Codes From. 21 Secrets A Third Wheel Will Never Tell You. The Real Reason Everyone Should Actually Move To Canada. A Guy Epically Trolled Twitter To Prove Not To Believe Everything You Read.

36 Photos Of Italy In The Fifties That Will Make You Want To Time Travel. 16 Uniquely New York Words You Need In Your Life. 29 Questions I Have For Couples Who Share Social Media Accounts. Top 10 Sports Movie Speeches. Secrets Teachers Don’t Want You To Know. Secretly Awkward Moments You Want To Disappear From. How Can You Tell If You're Dating Or Just Hooking Up? Weird Things Couples Do When There's a Spider. 9 Quotes To Conquer The Day. If Harry Potter Characters Texted. Signs You're The Clueless Friend. Friend Fights: 20s Vs 30s.

Related:  miguelhenriques   -  Random Odd Hilarious Squee   -  Hyperbole and a Half   -  quickmeme: the funniest page on the internet   -  Bethany Mota - YouTube   -  Upworthy: Because we’re all part of the same story.   -  Marina Abramovic and Ulay | Zen Garage   -  Free Personality Test   -  This Comic Will Forever Change the Way You Look at Privilege   -  Education   -  Enterprise